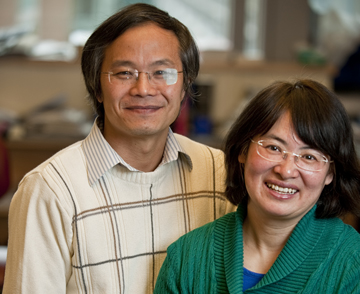 Targeted cancer therapies work by blocking a single oncogenic pathway to halt tumor growth. But because cancerous tumors have the unique ability to activate alternative pathways, they are often able to evade these therapies and regrow.

Moreover, tumors contain a small portion of cancer stem cells that are believed to be responsible for tumor initiation, metastasis and drug resistance.

Now a research team led by investigators at Harvard Medical School and the Cancer Center at Beth Israel Deaconess Medical Center, has identified an inhibitor of the Pin1 enzyme that can address both these challenges in acute promyelocytic leukemia (APL) and triple-negative breast cancer.

Their surprising discovery demonstrates that the vitamin A derivative ATRA (all-trans retinoic acid), a treatment for APL that is considered to be the first example of modern targeted cancer therapy, can block multiple cancer-driving pathways and, at the same time, eliminate cancer stem cells by degrading the Pin1 enzyme. Reported online in Nature Medicine, these novel findings suggest a promising new way to fight cancer—particularly cancers that are aggressive or drug resistant.

“Pin1 changes protein shape through proline-directed phosphorylation, which is a major control mechanism for disease,” explained co-senior author Kun Ping Lu, HMS professor of medicine and director of translational therapeutics in the Cancer Research Institute at Beth Israel Deaconess. “Pin1 is a common key regulator in many types of cancer and as a result can control over 50 oncogenes and tumor suppressors, many of which are known to also control cancer stem cells.” Lu also co-discovered the enzyme in 1996.

Until now, agents that inhibit Pin1 have been developed mainly through rational drug design. Although these inhibitors have proven active against Pin1 in the test tube, when they are tested in vitro in a cell model or in vivo in a living animal they are unable to efficiently enter cells to successfully inhibit Pin1 function.

In this new work, co-senior author Xiao Zhen Zhou, HMS assistant professor of medicine and an investigator in the Division of Translational Therapeutics at Beth Israel Deaconess, decided to take a different approach to identify Pin1 inhibitors: She developed a mechanism-based high-throughput screen to identify compounds that were targeting active Pin1.

“We had previously identified Pin1 substrate-mimicking peptide inhibitors,” explained Zhou. “We therefore used these as a probe in a competition binding assay and screened approximately 8,200 chemical compounds, including both approved drugs and other known bioactive compounds.” To increase screening success, Zhou chose a probe that specifically binds to the Pin1 enzyme active site very tightly, an approach that is not commonly used for this kind of screen.

“Initially, the screening results appeared to not have positive hits,” said Zhou, “so we had to manually sift through them looking for the one that would bind to Pin1.  We eventually spotted cis retinoic acid, which has the same chemical formula as all-trans retinoic acid (ATRA), but with a different chemical structure.” It turned out, Zhou explained, that Pin1 prefers binding to ATRA and cis retinoic acid needs to convert ATRA in order to bind Pin1.

“While it has been previously shown that ATRA’s ability to degrade the leukemia-causing fusion oncogene PML-RAR causes ATRA to stop the leukemia stem cells that drive APL, the underlying mechanism has remained elusive,” said Lu.

“APL develops when two tumor suppressors fuse together to become an oncogene,” added co-author Pier Paolo Pandolfi, the HMS George C. Reisman Professor of Medicine and director of the Cancer Genetics Program at Beth Israel Deaconess, whose own pioneering work revealed the molecular underpinnings of APL and led to its cure. “These new findings demonstrate that by inhibiting Pin1, you can degrade this fusion oncogene, thereby stopping cancer stem cells from replicating. This is a critically important discovery that will impact the treatment of other forms of cancer, since Pin1 inhibition is also affecting other key oncogenes.”

“The current ATRA drug has a very short half life of only 45 minutes in humans,” explained Lu. “We think that a more potent Pin1 inhibitor will be able to target many ‘dream targets,’ that are not currently druggable. ATRA appears to be well tolerated with minimal side effects and offers a promising new approach for targeting a Pin1-dependent common oncogenic mechanism in numerous cancer-driving pathways in cancer and cancer stem cells. This is especially critical for treating aggressive or drug-resistant cancers.”

This work was funded, in part, by grants from the National Institutes of Health (R01CA167677, R03DA031663, R01HL111430) and fellowship support from the Susan G. Komen for the Cure Foundation. Lu and Zhou have interests in Pinteon Therapeutics, Inc., which has licensed Pin1 technology from Beth Israel Deaconess.