A New View of Phineas Gage 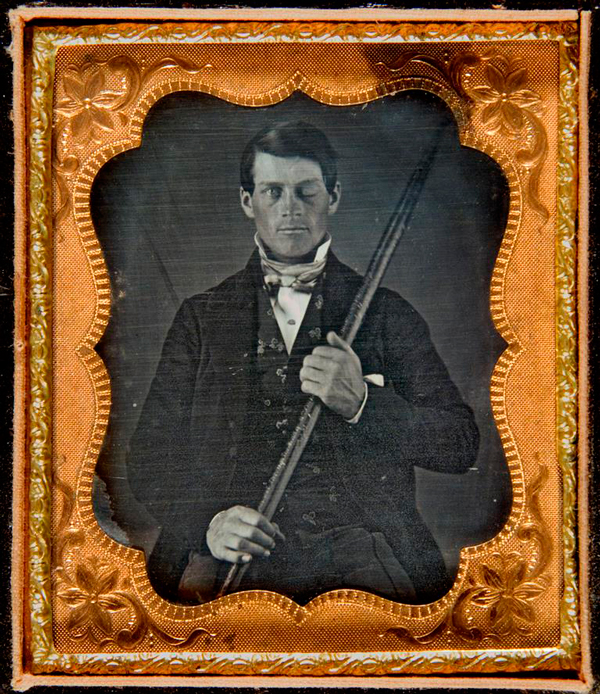 Daguerreotype of Phineas Gage. Image: Warren Anatomical Museum in the Francis A. Countway Library of Medicine

Daguerreotype of Phineas Gage. Image: Warren Anatomical Museum in the Francis A. Countway Library of Medicine

A daguerreotype of Phineas Gage, a rail worker who lived in the mid-nineteenth century, joined the Gage collection in the Warren Anatomical Museum in June. It joins other artifacts of what became known as the “American Crowbar Case.” The roughly 3-inch square image shows Gage holding the tamping iron that blew through his skull in a workplace accident that occurred more than 160 years ago. In the daguerreotype, Gage is well-kept, his face far less disfigured than researchers expected, given his accident; his level gaze engaging the viewer directly.

It is a Gage that surprises and delights researchers.

According to Hall, the Gage case has long-suffered a fact-and-fiction problem.

“You can read an amazing amount into a picture,” said Dominic Hall, Curator of the Warren Anatomical Museum at the Center for the History of Medicine. “There was a time when he was exhibiting himself at shows, and this might have been a publicity photograph for that.”

Added Hall, “Some people think that his composure signals that he had been more independent than previously thought. But to be honest, we don’t know the context of the picture. All we’re doing is reading it.”

According to Hall, the Gage case has long-suffered a fact-and-fiction problem. The daguerreotype provides new information; some believe it suggests that toward the end of his life Gage had made a social recovery and wasn’t as compromised as most have assumed.

Gage’s case has become a textbook example for studies such as posttraumatic social recovery, white-matter connectivity and frontal-lobe function. His place in the history of neurologic traumas began on September 13, 1848, in Cavendish, Vermont. Gage, a rail worker, was using a 3-foot, 7-inch long, 13.25 pound tamping iron to pack explosive powder in a railroad bed when the powder ignited and propelled the 1.25-inch diameter tamping iron through the skull of the then 25-year-old man. The bar severely damaged the optic nerve in Gage’s left eye and removed a fragment of his brain.

Although he survived, many observers said the accident changed Gage. His friends and family said he was no longer the man they had once known. Even his physician, John Martyn Harlow, said Gage’s behavior had become inconsistent, that he lacked respect and empathy, and that his language and actions had taken a grotesque turn. Harlow’s observations suggested a link between personality change and trauma to the brain’s frontal lobe.

Gage died 12 years after his accident. In 1867, his body was exhumed, and Harlow took possession of Gage’s skull and the tamping iron, both of which Harlow later gave to Harvard Medical School. The daguerreotype will join these items and Gage’s life cast which are currently held in the collection.

The daguerreotype is being donated to the Warren Museum by vintage photo collectors Jack and Beverly Wilgus. The Wilguses had purchased the image thinking the man pictured was a whaler. But in 2008, after some exchanges on social media, they learned that the man in the photograph was Phineas Gage.

“It's incredibly generous that the Wilguses are donating it to us,” said Hall. “They’ve invested in the history of Gage.”