A New—and Reversible—Cause of Aging 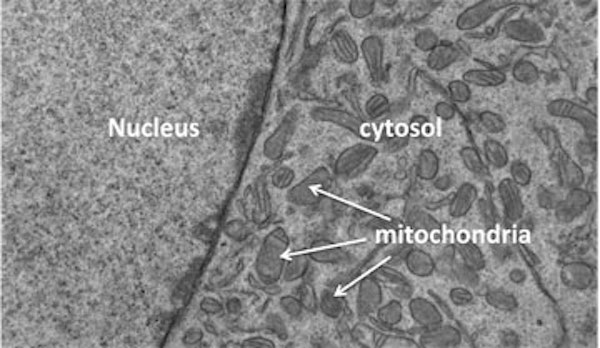 Researchers have discovered a cause of aging in mammals that may be reversible.

The essence of this finding is a series of molecular events that enable communication inside cells between the nucleus and mitochondria. As communication breaks down, aging accelerates. By administering a molecule naturally produced by the human body, scientists restored the communication network in older mice. Subsequent tissue samples showed key biological hallmarks that were comparable to those of much younger animals.

“The aging process we discovered is like a married couple—when they are young, they communicate well, but over time, living in close quarters for many years, communication breaks down,” said Harvard Medical School Professor of Genetics David Sinclair, senior author on the study. “And just like with a couple, restoring communication solved the problem.”

This study was a joint project between Harvard Medical School, the National Institute on Aging, and the University of New South Wales, Sydney, Australia, where Sinclair also holds a position.

The findings are published Dec. 19 in Cell.

Mitochondria are often referred to as the cell's "powerhouse," generating chemical energy to carry out essential biological functions. These self-contained organelles, which live inside our cells and house their own small genomes, have long been identified as key biological players in aging. As they become increasingly dysfunctional overtime, many age-related conditions such as Alzheimer’s disease and diabetes gradually set in.

Researchers have generally been skeptical of the idea that aging can be reversed, due mainly to the prevailing theory that age-related ills are the result of mutations in mitochondrial DNA—and mutations cannot be reversed.

Sinclair and his group have been studying the fundamental science of aging—which is broadly defined as the gradual decline in function with time—for many years, primarily focusing on a group of genes called sirtuins. Previous studies from his lab showed that one of these genes, SIRT1, was activated by the compound resveratrol, which is found in grapes, red wine and certain nuts. 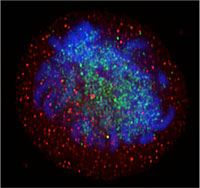 Ana Gomes, a postdoctoral scientist in the Sinclair lab, had been studying mice in which this SIRT1 gene had been removed. While they accurately predicted that these mice would show signs of aging, including mitochondrial dysfunction, the researchers were surprised to find that most mitochondrial proteins coming from the cell’s nucleus were at normal levels; only those encoded by the mitochondrial genome were reduced.

“This was at odds with what the literature suggested,” said Gomes.

As Gomes and her colleagues investigated potential causes for this, they discovered an intricate cascade of events that begins with a chemical called NAD and concludes with a key molecule that shuttles information and coordinates activities between the cell’s nuclear genome and the mitochondrial genome. Cells stay healthy as long as coordination between the genomes remains fluid. SIRT1’s role is intermediary, akin to a security guard; it assures that a meddlesome molecule called HIF-1 does not interfere with communication.

For reasons still unclear, as we age, levels of the initial chemical NAD decline. Without sufficient NAD, SIRT1 loses its ability to keep tabs on HIF-1. Levels of HIF-1 escalate and begin wreaking havoc on the otherwise smooth cross-genome communication. Over time, the research team found, this loss of communication reduces the cell's ability to make energy, and signs of aging and disease become apparent.

“This particular component of the aging process had never before been described,” said Gomes.

While the breakdown of this process causes a rapid decline in mitochondrial function, other signs of aging take longer to occur. Gomes found that by administering an endogenous compound that cells transform into NAD, she could repair the broken network and rapidly restore communication and mitochondrial function. If the compound was given early enough—prior to excessive mutation accumulation—within days, some aspects of the aging process could be reversed. 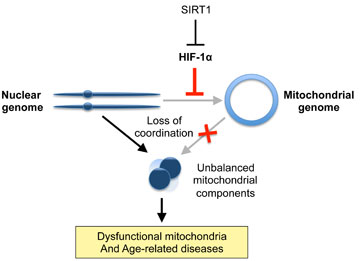 Examining muscle from two-year-old mice that had been given the NAD-producing compound for just one week, the researchers looked for indicators of insulin resistance, inflammation and muscle wasting. In all three instances, tissue from the mice resembled that of six-month-old mice. In human years, this would be like a 60-year-old converting to a 20-year-old in these specific areas.

One particularly important aspect of this finding involvesHIF-1. More than just an intrusive molecule that foils communication, HIF-1 normally switches on when the body is deprived of oxygen. Otherwise, it remains silent. Cancer, however, is known to activate and hijack HIF-1. Researchers have been investigating the precise role HIF-1 plays in cancer growth.

“There’s clearly much more work to be done here, but if these results stand, then certain aspects of aging may be reversible if caught early,” said Sinclair.

The researchers are now looking at the longer-term outcomes of the NAD-producing compound in mice and how it affects the mouse as a whole. They are also exploring whether the compound can be used to safely treat rare mitochondrial diseases or more common diseases such as Type 1 and Type 2 diabetes. Longer term, Sinclair plans to test if the compound will give mice a healthier, longer life.

The Sinclair lab is funded by the National Institute on Aging (NIA/NIH), the Glenn Foundation for Medical Research, the Juvenile Diabetes Research Foundation, the United Mitochondrial Disease Foundation and a gift from the Schulak family.