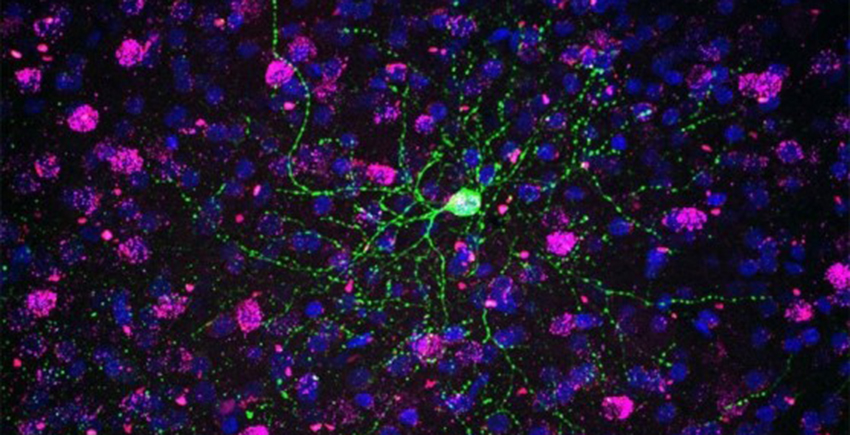 A specific type of interneuron (green) is imaged in the visual cortex of a marmoset. Image: Kirsten Levandowski and Heather Zaniewski

Neuropsychiatric illnesses such as schizophrenia and autism are a complex interplay of brain chemicals, environment and genetics and require careful study to understand the root causes.

Scientists have traditionally relied on samples taken from mice and nonhuman primates to study how these diseases develop, but the question has lingered: Are the brains of these subjects similar enough to human brains to yield useful insights?

New work from Harvard Medical School and the Broad Institute of MIT and Harvard points toward an answer.

In a study published Sept. 30 in Nature, the researchers reported several key differences in the brains of ferrets, mice, nonhuman primates and humans, all focused on a type of neuron called the interneuron.

The team found a new type of interneuron only in primates. The new cells are located in a part of the brain called the striatum, which is associated with Huntington’s disease and potentially schizophrenia.

The findings could help accelerate research into causes of and treatments for neuropsychiatric illnesses by helping scientists choose the animal model that best mimics features of the human brain that may be involved in these diseases.

“The data from this work will inform the study of human brain disorders because it helps us think about which features of the human brain can be studied in mice, which features require higher organisms such as marmosets and why mouse models often don’t reflect the effects of the corresponding mutations in humans,” said study senior author Steven McCarroll, the Dorothy and Milton Flier Professor of Biomedical Science and Genetics in the Blavatnik Institute at HMS and director of genetics at the Stanley Center for Psychiatric Research at the Broad.

“Dysfunctions of interneurons have been strongly linked to several brain disorders, including autism spectrum disorder and schizophrenia,” said study co-author Guoping Feng, director of model systems and neurobiology at the Stanley Center and professor of neuroscience at MIT’s McGovern Institute for Brain Research. “These data further demonstrate the unique importance of nonhuman primate models in understanding neurobiological mechanisms of brain disorders and in developing and testing therapeutic approaches.”

Interneurons form key nodes within neural circuitry in the brain and help regulate neuronal activity by releasing the neurotransmitter GABA, which inhibits the firing of other neurons.

Fenna Krienen, HMS research fellow in genetics in the McCarroll lab and first author of the study, and her colleagues wanted to track the natural history of interneurons.

“We wanted to gain an understanding of the evolutionary trajectory of the cell types that make up the brain,” said Krienen. “And then we went about acquiring samples from species that could inform this understanding of evolutionary divergence between humans and the models that so often stand in for humans in neuroscience studies.”

One of the tools the researchers used was Drop-seq, a high-throughput single nucleus RNA sequencing technique developed by McCarroll’s lab, to classify the roles and locations of more than 184,000 telencephalic interneurons in the brains of ferrets, humans, macaques, marmosets and mice.

The team isolated the nuclei of interneurons from the cortex, hippocampus and striatum and profiled the cells' RNA.

The researchers thought that because interneurons are found in all vertebrates, the cells would be relatively static from species to species.

“But with these sensitive measurements and a lot of data from the various species, we got a different picture about how lively interneurons are, in terms of the ways that evolution has tweaked their programs or their populations from one species to the next,” said Krienen.

She and her collaborators identified four main differences in interneurons among the species they studied. The cells change their proportions across brain regions, alter the programs they use to link up with other neurons and can migrate to different regions of the brain. Most strikingly, the scientists discovered that primates have a novel interneuron not found in other species.

The new interneuron is located in the striatum—the brain structure responsible for cognition, reward, and coordinated movements that has existed as far back on the evolutionary tree as ancient primitive fish. The researchers were amazed to find that the new neuron type made up a third of all interneurons in the striatum.

“Although we expected the big innovations in human and primate brains to be in the cerebral cortex, which we tend to associate with human intelligence, it was in fact in the venerable striatum that Fenna uncovered the most dramatic cellular innovation in the primate brain,” said McCarroll. “This cell type had never been discovered before because mice have nothing like it.”

“The question of what provides the 'human advantage' in cognitive abilities is one of the fundamental issues neurobiologists have endeavored to answer,” said Gordon Fishell, professor of neurobiology in the Blavatnik Institute at HMS and a collaborator on the study. “These findings turn on end the question, 'How do we build better brains?' It seems at least part of the answer stems from creating a new list of parts.”

A better understanding of how these inhibitory neurons vary between humans and lab models will provide researchers with new tools for investigating various brain disorders.

Next, the researchers will build on this work to determine the specific functions of each type of interneuron.

“In studying neurodevelopmental disorders, you would like to be convinced that your model is an appropriate one for really complex social behaviors,” Krienen said. “And the major overarching theme of the study was that primates in general seem to be very similar to one another in all of those interneuron innovations.”