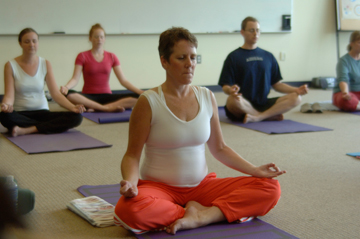 A new study from investigators at the Benson-Henry Institute for Mind/Body Medicine at Massachusetts General Hospital and Beth Israel Deaconess Medical Center finds that eliciting the relaxation response—a physiologic state of deep rest induced by practices such as meditation, yoga, deep breathing and prayer—produces immediate changes in the expression of genes involved in immune function, energy metabolism and insulin secretion.

“Many studies have shown that mind/body interventions like the relaxation response can reduce stress and enhance wellness in healthy individuals and counteract the adverse clinical effects of stress in conditions like hypertension, anxiety, diabetes and aging,” said Herbert Benson, HMS professor of medicine at Mass General and co-senior author of the report.

Benson is director emeritus of the Benson-Henry Institute.

“Now for the first time we’ve identified the key physiological hubs through which these benefits might be induced,” he said.

Published in the open-access journal PLOS ONE, the study combined advanced expression profiling and systems biology analysis to both identify genes affected by relaxation response practice and to determine the potential biological relevance of those changes.

“Some of the biological pathways we identify as being regulated by relaxation response practice are already known to play specific roles in stress, inflammation and human disease. For others, the connections are still speculative, but this study is generating new hypotheses for further investigation," said Towia Libermann, HMS associate professor of medicine at Beth Israel Deaconess and co-senior author of the study.

Benson first described the relaxation response—the physiologic opposite of the fight-or-flight response—almost 40 years ago, and his team has pioneered the application of mind/body techniques to a wide range of health problems. Studies in many peer-reviewed journals have documented how the relaxation response both alleviates symptoms of anxiety and many other disorders and also affects factors such as heart rate, blood pressure, oxygen consumption and brain activity.

In 2008, Benson and Libermann led a study finding that long-term practice of the relaxation response changed the expression of genes involved with the body’s response to stress. The current study examined changes produced during a single session of relaxation response practice, as well as those taking place over longer periods of time.

The study enrolled a group of 26 healthy adults with no experience in relaxation response practice, who then completed an 8-week relaxation-response training course.

Before they started their training, they went through what was essentially a control group session: Blood samples were taken before and immediately after the participants listened to a 20-minute health education CD and again 15 minutes later. After completing the training course, a similar set of blood tests was taken before and after participants listened to a 20-minute CD used to elicit the relaxation response as part of daily practice.

The sets of blood tests taken before the training program were designated “novice,” and those taken after training completion were called “short-term practitioners.” For further comparison, a similar set of blood samples was taken from a group of 25 individuals with 4 to 25 years’ experience regularly eliciting the relaxation response through many different techniques before and after they listened to the same relaxation response CD.

Blood samples from all participants were analyzed to determine the expression of more than 22,000 genes at the different time points.

The results revealed significant changes in the expression of several important groups of genes between the novice samples and those from both the short- and long-term sets. Even more pronounced changes were shown in the long-term practitioners.

A systems biology analysis of known interactions among the proteins produced by the affected genes revealed that pathways involved with energy metabolism, particularly the function of mitochondria, were upregulated during the relaxation response. Pathways controlled by activation of a protein called NF-κB—known to have a prominent role in inflammation, stress, trauma and cancer—were suppressed after relaxation response elicitation. The expression of genes involved in insulin pathways was also significantly altered.

“The combination of genomics and systems biology in this study provided great insight into the key molecules and physiological gene interaction networks that might be involved in relaying beneficial effects of relaxation response in healthy subjects,” said Manoj Bhasin, HMS assistant professor of medicine, co-lead author of the study, and co-director of the Beth Israel Deaconess Genomics, Proteomics, Bioinformatics and Systems Biology Center.

Bhasin noted that these insights should provide a framework for determining, on a genomic basis, whether the relaxation response will help alleviate symptoms of diseases triggered by stress. The work could also lead to developing biomarkers that may suggest how individual patients will respond to interventions.

Benson stressed that the long-term practitioners in this study elicited the relaxation response through many different techniques—various forms of meditation, yoga or prayer—but those differences were not reflected in the gene expression patterns.

“People have been engaging in these practices for thousands of years, and our finding of this unity of function on a basic-science, genomic level gives greater credibility to what some have called ‘new age medicine,’ ” he said.

“While this and our previous studies focused on healthy participants, we currently are studying how the genomic changes induced by mind/body interventions affect pathways involved in hypertension, inflammatory bowel disease and irritable bowel syndrome. We have also started a study—a collaborative undertaking between Dana-Farber Cancer Institute, Mass General and Beth Israel Deaconess—in patients with precursor forms of multiple myeloma, a condition known to involve activation of NF-κB pathways," said Libermann, who is the director of the Beth Israel Deaconess Medical Center Genomics, Proteomics, Bioinformatics and Systems Biology Center.