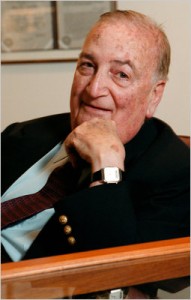 Baruj Benacerraf, the George Fabyan Professor of Comparative Pathology Emeritus, died Aug. 2, 2011, at his home in Jamaica Plain. He was 90.

Benacerraf, was a Nobel Prize-winning immunologist and a brilliant, visionary leader—a former president of Dana-Farber Cancer Institute who, from 1980 to 1992, guided the Institute through a period of tremendous growth.

A native of Caracas, Venezuela, Benacerraf was encouraged to follow his father into the family textile business but soon quit Philadelphia’s Textile Engineering School. Instead he became one of the world’s great innovators in modern immunology, earning the Nobel Prize in Physiology in 1980 for his discovery that genetic factors play a central role in the function of the immune system. He shared the prize with colleagues Jean Dausset of the Université de Paris and George Snell of the Jackson Laboratory in Bar Harbor, Maine.

Benacerraf’s seminal discoveries help explain basic disease processes such as infection, autoimmune disorders and cancer, and have shaped research in organ transplantation, HIV/AIDS treatment and the development of therapeutic cancer vaccines. Benacerraf recruited many outstanding researchers and clinicians to teaching professorships at Harvard Medical School and Dana-Farber, and was himself chair of the Department of Pathology and the George Fabyan Professor from 1970 to 1991.

After stepping down as president, Benacerraf remained active, working in his own lab into his 80s and serving as a Dana-Farber trustee and member of its executive committee. At an annual lecture at the Institute that was named for him, he delighted in welcoming former students and protégés, many of whom became international leaders in the fight against cancer and related diseases.

The Baruj Benacerraf Professorship, first held in 1990 by Stuart Schlossman, who retired in 2006, is now held by Harvey Cantor, chair of the Institute’s Department of Cancer Immunology and AIDS. Endowed professorships are the highest honor a university can award a professor.

Benacerraf was predeceased by his beloved wife of 68 years, Annette. In addition to a daughter, Beryl Benacerraf, clinical professor of obstetrics, gynecology and reproductive biology at Brigham and Women’s Hospital, and son-in-law Peter Libby, the Mallinckrodt Professor of Medicine at HMS and chief of cardiovascular medicine at Brigham and Women’s, Benacerraf leaves two grandchildren, Brigitte and Oliver Libby, and a brother, Paul Benacerraf, the James S. McDonnell Distinguished University Professor of Philosophy Emeritus at Princeton University. Service arrangements have not yet been finalized.

Details of Benacerraf’s extraordinary life and achievements are chronicled in tributes in the New York Times and in the Boston Globe.