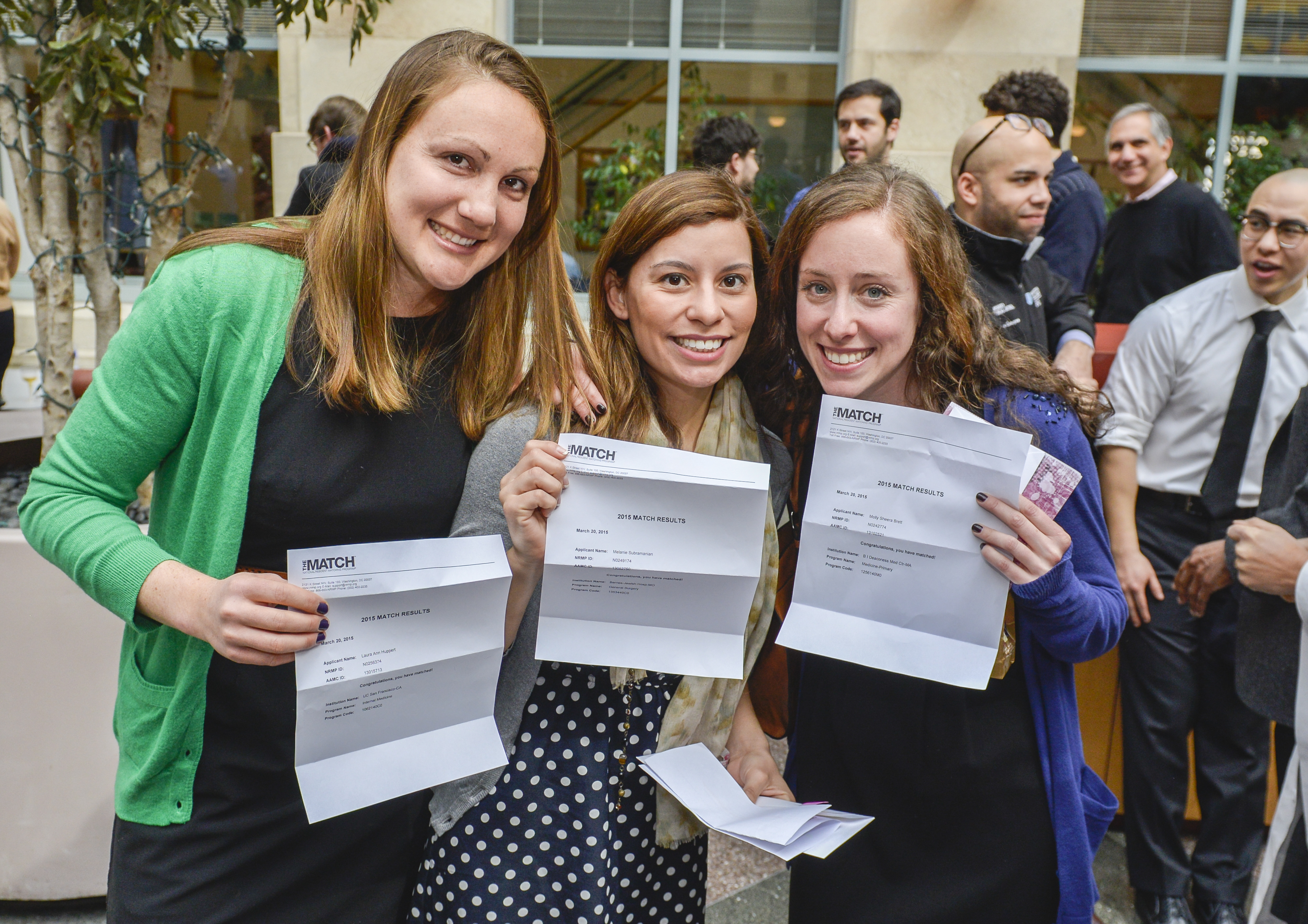 The first day of spring is traditionally a time for new beginnings. On the Harvard Medical School campus, a few daffodils are emerging from the ground as the snow recedes and the first blackbird songs of the year are in the air.

Another new season began at noon on March 20 inside the Tosteson Medical Education Center. With the ringing of a bell, members of the HMS class of 2015 tore open personalized envelopes that revealed where each student will spend the next three to seven years of their training in residency programs.

The moment, echoed at medical schools across the country, is part of the special ceremony that is Match Day, the one day each year when prospective residents learn what their medical future holds.

Before the bell rang, Holmes Society student Brian Boyle said he was excited to learn what the next phase of his career had in store for him. Boyle was looking for a match in psychiatry.

“I had no idea where I’d be now four years ago, and I’m excited to see where I’ll be for the next four years,” Boyle said, before learning he had matched to Massachusetts General Hospital.

“I’m looking forward to spending the rest of my career helping people with what I think is the worst kind of human suffering,” he said.

Matching students, along with their family and friends, assembled in the TMEC atrium to celebrate matches with hugs and high fives, selfies and family photos. Some were looking for old friends who would be colleagues at their new hospitals, others contemplated moves across the country and all were beginning to imagine how their blossoming careers may grow.

Christina Grassi, a member of the Cannon Society who matched in ophthalmology at New York Presbyterian-Weill Cornell Medical Center noted her appreciation for the strong sense of community at HMS that has bonded students and faculty, forming a new kind of family.

“We don’t walk this road alone,” Grassi said. “Our dreams are shared dreams, which makes the experience even better.”

Samsiya Ona, a Peabody Society member originally from Togo, matched in Boston in a joint program in obstetrics and gynecology at Brigham and Women’s Hospital and Mass General.

She hopes to become an expert in women’s health, focusing on maternal-fetal medicine. She said she plans to split time between Boston and Togo in the future.

Edward Hundert, the Daniel D. Federman, M.D. Professor in Residence of Global Health and Social Medicine and Medical Education and dean for medical education at HMS, noted that the students have worked very hard to get to this point, although the road is not likely to get easier.

“The reward for a job well done is another job,” he said.

In addition to hard work, the students will need patience and perseverance moving forward, Hundert said.

While the students who assembled for Match Day were deeply focused on particular aspects of medicine, they were also interested in more diverse aspects of their careers, and they were looking forward to finding out which doors would open for them in the future.

Neil Kalwani, a student in the Holmes Society, matched in internal medicine at the Brigham. Kalwani said he may pursue a career in primary care, but he is also interested in cardiology and oncology, and in health care reform. In addition to completing his MD this year, Kalwani is a candidate for a Master in Public Policy from the Harvard Kennedy School.

“I’m going into residency with an open mind, to see what catches my interest as I move along,” he said.

The nationwide match, which pairs students and residency programs around the country, is run by the National Resident Matching Program (NRMP), a nonprofit organization founded in 1952 by medical students to provide an orderly and fair way to match applicants to U.S. residency positions.

This year’s match was the largest main residency match in NRMP history. Nearly17,000 U.S. medical school seniors and more than 9,000 other applicants matched to one of the more than 27,000 first-year positions offered in the 2015 match, according to an NRMP statement.

Some of the most competitive specialties included dermatology, medicine/psychiatry, obstetrics/gynecology, orthopedic surgery, pediatrics/primary care, physical medicine/rehabilitation, and thoracic surgery. All of the vacancies in those specialties were filled, the NRMP statement said.

General surgery, neurological surgery, otolaryngology, plastic surgery, and radiation oncology had fewer than five unfilled positions after the matching algorithm was processed, according to the NRMP.

How HMS matches up

The HMS Office of Student Affairs noted that it no longer attempts to calculate the number of students going into primary care because it is impossible to predict how many people who train in internal medicine will eventually go into primary care versus specialty care. In addition, the office noted that there is an emerging trend to create merged residencies or other programs that do not allow easy categorization.

This year, 40 students matched in internal medicine (including 9 who were designated primary care or global health), 10 matched in pediatrics, 5 in obstetrics/gynecology, 4 matched in family medicine and 2 in medicine/pediatrics.