Could an extremophile hold the secret to redefining the treatment of devastating injuries? 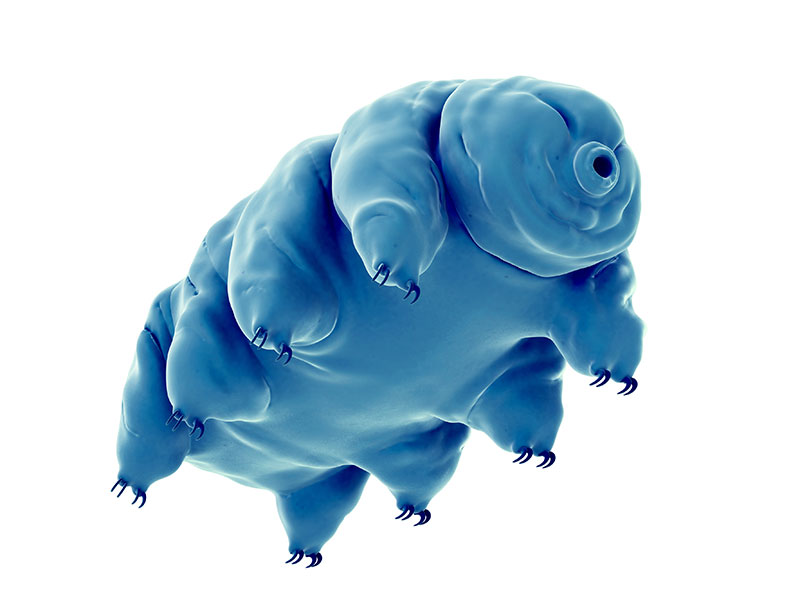 The gentle teddy-bear features of this polyonymic animal belie its hardy nature.

Capable of withstanding dehydration and cosmic radiation and surviving temperatures as low as -450 F and as high as 300 F, this eight-limbed microscopic creature holds the key to one of biology’s greatest secrets—extreme survival.

Tardigrades have captivated the imagination of astrobiologists—several of the clan’s members have traveled to space as part of research experiments—and tantalized the fantasies of sci-fi fans as a giant alien creature in Star Trek: Discovery.

Now scientists at Harvard Medical School are wondering: Can the physiology of this extremophile yield insights that can be applied to humans?

Inspired by nature, optimized in the lab

The HMS group, working with colleagues at the University of Washington, Seattle, and MIT, are hoping to answer this very question in an ambitious new project aimed at deciphering the structure and function of several tardigrade proteins suspected to play a role in the organism’s resilience, and then use these proteins as the basis for human therapies that halt tissue damage and prevent cell death.

The team’s goal is to engineer an optimized version of these proteins and use them to slow down metabolic activity in injured cells—the biological equivalent of hitting the pause button on cellular processes, including damage-causing inflammation, infection and, ultimately, cell demise.

The team’s ultimate goal is to develop a protein-based therapy that can halt tissue damage in traumatic injuries, heart attacks, strokes and sepsis, among other conditions.

“It really started out as a wacky, high-risk idea,” said Pamela Silver, the project’s principal co-investigator and professor of systems biology in the Blavatnik Institute at HMS and member of the Harvard Wyss Institute at Harvard.

In the spring of 2018, Silver came across a grant challenge posted by the U.S. military seeking novel solutions to stabilizing traumatic injuries in combat zones. She knew just whose brain to pick.

Roger Chang, a bioinformatician and molecular biologist in Silver’s lab, has long been fascinated with protein resistance, studying, among other things, the role of proteins in thermal stress and shielding bacterial cells from gamma radiation. Not long ago, Chang had seen a study showing that when tardigrade proteins are introduced in E.coli and yeast, they render the organisms unusually tolerant to desiccation.

What if these processes could be replicated in human cells, Chang wondered. The wild-type tardigrade protein showed only modest protective effect in E.coli and yeast, but what if these proteins could be made more potent in the lab, Chang asked.

“I started conceiving how we could improve upon nature’s ‘raw’ materials and functionalize them for human use,” Chang said.

The beauty of disorder

What allows tardigrades to survive in conditions that would kill most other organisms? The precise mechanisms behind their ability to undergo self-preserving cryptobiosis remain poorly understood. However, evidence suggests that when it undergoes this process, it deploys a series of biochemicals—including proteins and sugar molecules—that shield nucleic acids and proteins inside cells from damage.

The proteins in question belong to a class known as intrinsically disordered proteins (IDPs). IDPs’ most striking feature—which gives the class its name—is the lack of neat, orderly structure that is easily visualized in 3D imaging studies.

Tardigrades are, by no means, the only animals exhibiting the presence of IDPs. These proteins are nearly ubiquitous across species, including humans. Nor are tardigrades the only organisms capable of surviving extreme stress. Other known extremophiles include certain nematodes, brine shrimp and the poetically named resurrection plant, which can survive dehydration for years and bloom back into life within mere hours of being watered.

Biologists have been aware of the existence of disordered proteins for decades but long dismissed them as inconsequential. IDPs are so poorly understood that there is still no clear consensus on what constitutes one. In fact, for the most part, their functions remain unknown. What scientists do know is that not all disordered proteins are capable of slowing down cellular activity. Mapping out their structure remains a fundamental problem—a challenge that leaves scientists wondering which among these proteins are truly disordered and which ones are simply not amenable to current structure-mapping techniques.

Silver and Chang knew it was time to call on Debora Marks, a mathematician and computational biologist in the Blavatnik Institute at HMS with a keen interest in IDPs and expertise in predictive computer modeling.

It would be a daunting task. Yet, combining Silver’s expertise in synthetic biology with Marks’ prowess in machine learning and computation would put this within the realm of the possible. 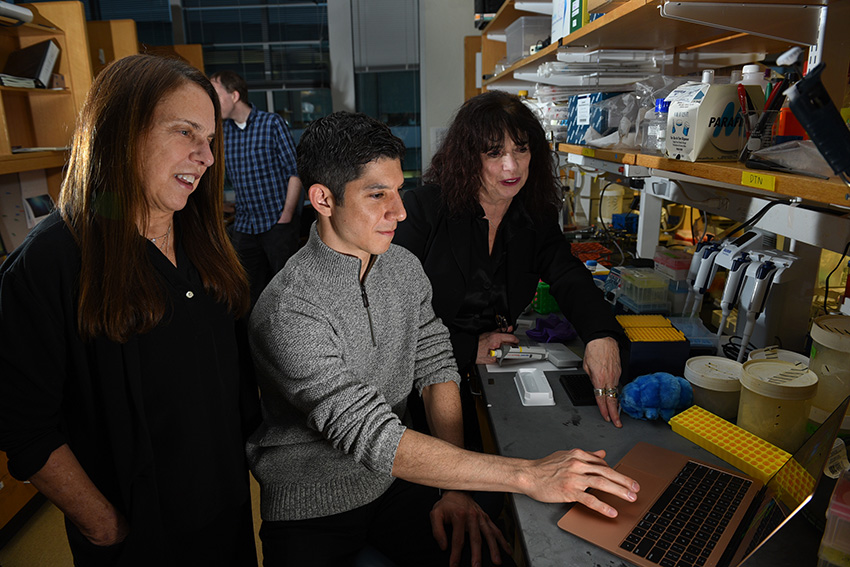 Pamela Silver (left), Roger Chang and Debora Marks are on a quest to understand the secrets of cryptobiosis in the hardy tardigrade and use them as the basis for therapies in humans. Photo: Rick Groleau, HMS

As recently as 10 years ago, synthetic biologists would approach protein development by brute force—trial-and-error design followed by testing in a long, seemingly interminable, string of experiments to arrive at the right recipe. Today, advances in computational biology and machine learning are making the process more focused and efficient.

A protein is a string of amino acids, the sequence of which determines the protein’s shape. The shape, in turn, dictates the protein’s function and role: what it can and cannot do. The number of possible amino acid combinations is infinite so how does one pick the right sequence to make a protein that performs a predetermined set of biological tasks?

Marks, the project's other principal co-investigator, will spearhead the computational design of synthetic IDPs suitable for use in human cells. What this entails, Marks explains, is discovering which features of amino acid sequences in a protein would allow it to slow a cell’s biological functions and do so reversibly. The task would require the use of probabilistic computer modelling to build a protein that is both safe and functional in humans. A critical prerequisite for use in humans would be ensuring that the protein can bypass the body’s immune defenses. In other words, the candidate protein should not trigger an antibody response in human tissues and cause an attack by the host’s immune system. To optimize the protein’s design features, Marks will collaborate with David Baker at the University of Washington to predict how the protein would interact with tens of thousands of cellular components when introduced inside human cells.

Rather than testing infinite possibilities, this predictive design is targeted, Marks said. It is an informed pretesting of a finite, and hopefully, small number of possible amino acid combinations.

“This is not a black-box approach where we throw in every possible combination and put in a load of features and see what sticks,” Marks said. “It is a form of unsupervised machine learning that doesn't presume an outcome. The universe of possible protein sequences is infinite, so we want to be directed and targeted.”

The team will start out by testing the candidate proteins in human cells derived from various tissues—muscle, vascular, cardiac, nerve cells, and so forth. Then they will test the protein in human organoids and, finally in animals. It would be possible to precision-target the protein to specific cell, tissues and organ types, Silver said.

“We’ve studied protein targeting for years, and we have a trick we’ve developed on how to home in a protein on specific targets but not others,” Silver said.

How the damage-halting protein will be delivered inside cells will be one of the fundamental challenges in this project. If solved, it would provide a solution to a huge hurdle in pharmaceutical development.

“We are hoping that we can find some new entry points into the cell to deliver the protein,” Silver said.

If successful, such a template could be adapted to develop other proteins.

“The vision is to have a test bed where we can deploy lots of different styles of these proteins and find out which are the best,” Silver said. “The ultimate dream would be to design totally new proteins, never seen before. The work can then become a new platform for designing proteins.”

In December 2018, the team was awarded a five-year cooperative agreement worth up to $14.8 million from the Defense Advance Research Projects Agency (DARPA) to pursue the idea.

The initial application of the protein-based compounds would be to halt bleeding and tissue necrosis in traumatic injuries. The use of a compound that halts cell death would allow for transportation and treatment while averting the disseminated tissue damage, infection and cell death that occurs when treatment of such injuries is delayed.

But the long-term, and far more ambitious, goal is to extend the therapeutic benefit of such compounds far beyond the battlefield, Silver said.

Two conditions that stand to benefit from such an approach are heart attacks and strokes.

In the case of heart attacks, for example, even when patients are treated relatively quickly, the myocardial infarction has already killed cells in the oxygen-starved heart muscle. The longer the delay, the more extensive the damage and the greater the radius of tissue death. The “time is muscle” adage refers to the notion that even small delays in treatment can cause irreversible muscle loss, which in turn leads to long-term cardiac damage, the eventual loss of heart muscle function, heart failure and, in extreme cases, death.

The same is true for brain insults, such as strokes or traumatic injuries, where damage to a tiny area of the brain can ripple out to affect surrounding nerve cells. If people in the throes of a heart attack or a stroke could be treated with protein-derived agents that effectively pause ongoing damage until patients are transported to the hospital, their outcomes could be dramatically improved. Such treatment would be particularly useful for injuries occurring in geographically isolated areas where emergency or specialized trauma care is not available.

A biopausing compound could also allow for refrigeration-free preservation of protein-based drugs, enabling easier and cheaper transportation, the team said. Another possible use would be more effective cryopreservation of eggs for in-vitro fertilization. Current oocyte-preservation techniques involve classic deep freezing (cryopreservation) and a newer approach called vitrification, a process that puts tissues in a chemically induced crystallized state. Vitrification requires the use of several chemicals, including ethylene glycol, the active ingredient in antifreeze. While vitrification increases egg viability, data on long-term outcomes for offspring are still lacking.

“A biological that is engineered to avoid toxicity based on a design leveraging millions of years of evolution to confer cellular protection is not only likely to be safer but also to potentially offer improved egg viability over existing technology,” Chang said. Similar potential exists for the preservation of organs for transplantation and could complement emerging techniques for whole-body preservation, he added.

Cryptobiotic compounds could also enhance research efforts by allowing scientists to perform targeted silencing of specific proteins or cell types during experiments. For example, if a researcher seeks to determine whether protein A is sensitive to an experimental drug, she could use an IDP-based compound to de-activate the protein in question and then gauge how the cell responds to a given drug in the absence of the silenced protein.

Although it sounds like the stuff of science fiction, the concept makes elegant evolutionary sense. After all, the team’s efforts are predicated on adapting preexisting biological recipes tried and tested over tens of millions of years of evolution.

“What we do as synthetic biologists is we look at nature,” Silver said. “Then we ask what we can draw from it and use as a platform to solve a problem.”

“If somebody told you, let’s take a multicellular organism, an animal or a human, and change its metabolism so that it can withstand huge amounts of stress—heat, cold, dehydration—and then bring it back to life, you’d say that’s just science fiction, wouldn’t you?” Marks said. “But the fact is that real life has already done this.”

The mighty tardigrade certainly has.