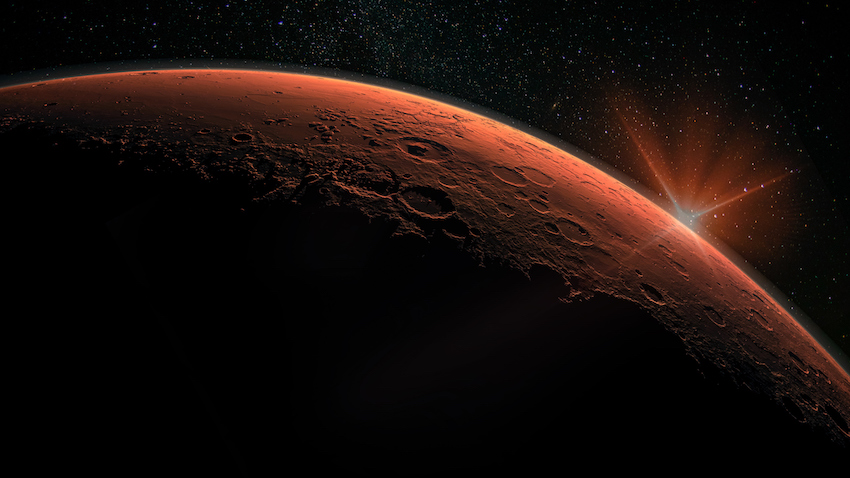 Fifty years ago this month, the Apollo 11 mission landed on the moon, and the first human being took “one small step” onto its surface.

Now, the buzz is around getting humans to Mars, and, according to a new report on research in rats published in Frontiers in Physiology, the first humans who set foot on the red planet might benefit from moderate amounts of resveratrol, an ingredient found in grapes and blueberries, to help prevent muscle atrophy during such a mission.

The researchers caution, however, that it remains unclear whether the benefits will translate to humans and, if so, how much resveratrol would be needed to prevent the effects of microgravity in astronauts during space travel.

Researchers at Beth Israel Deaconess Medical Center have demonstrated that resveratrol—a naturally occurring ingredient in grapes and blueberries—can preserve muscle function and mitigate muscle atrophy under conditions that mimic the gravity on Mars, which is about 40 percent as strong as that experienced on Earth. The team’s findings suggest that supplementing future astronauts’ diets with resveratrol could help maintain their musculoskeletal health even on a long-term mission to Mars.

“Resveratrol has been extensively studied for its health benefits, including its anti-inflammatory, antioxidant and antidiabetic effects,” said senior author Seward Rutkove, HMS professor of neurology and chief of the Division of Neuromuscular Disease at Beth Israel Deaconess. “Resveratrol has also been shown to preserve bone and muscle loss, however there’s a lack of research regarding its effects on the musculoskeletal system in partial gravity. We hypothesized that a moderate daily dose would help mitigate muscle deconditioning under conditions that replicate the partial gravity on Mars.”

Muscle atrophy is an almost immediate consequence and one of the most serious side effects of spaceflight. Studies of crews over the last fifty years of manned spaceflight reveal that astronauts can lose up to 20 percent of their muscle mass in less than two weeks in microgravity.

To prevent this muscle decomposition, astronauts living and working aboard the International Space Station for extended missions exercise several hours each day. Yet, most return to Earth in a weakened state, requiring months of postflight rehabilitation. The first humans landing on an alien world will ideally arrive in better shape. In addition to physical training, could a dietary supplement help preserve muscle mass during their mission to Mars?

To test that idea, the scientists used an innovative method to replicate Martian gravity in rats designed by corresponding author Marie Mortreux, HMS research fellow in neurology in Rutkove’s lab. This method was based on a similar approach in mice, originally developed by Mary Bouxsein, HMS professor of orthopedic surgery and director of the Center for Advanced Orthopaedic Studies at Beth Israel Deaconess.

“In the past, mimicking lower gravity had been achieved by tail suspension,” said Mortreux. “Although effective, this approach presents a variety of challenges, including impaired blood flow and spinal misalignment. To avoid these issues and to help keep the animals horizontal and presumably more comfortable, we incorporated a custom-fit suspension harness.”

In this pilot study of two dozen male animals, half lived under normal gravity conditions as a control group, while half were exposed to Martian gravity, which is about 40 percent of that on Earth. Half of each of these groups received 150 milligrams resveratrol per kilogram of body weight per day, while half did not.

As hypothesized, the scientists found that after two weeks living in partial gravity, all animals experienced muscle atrophy. However, they also saw that animals that received resveratrol supplementation maintained both front and hind limb grip force—a metric that rapidly declines when animals are exposed to partial weight-bearing conditions. Additionally, resveratrol supplementation led to a significant increase in muscle weight, myofiber (or muscle cell) size, and a protection of muscle composition.

“After five decades of manned low earth orbit missions, scientists have a relatively good understanding of the effects of microgravity on the human body, but the consequences of partial gravity remain far less well understood,” said Mortreux. “This study emphasizes that natural compounds could be key to maintaining human health as we journey to the moon and to the red planet.”

To follow up, the team would like to assess the benefits of resveratrol supplements in females as well as males, to see if the supplement may be of benefit for all space explorers.

In addition to Rutkove and Mortreux, co-authors include Bouxsein and Daniela Riveros, an HMS neurology research fellow in Rutkove’s lab.

This work was funded by a grant from the National Aeronautics and Space Administration (grant no. NNX16AL36G).