Mapping the Future of Global Surgery 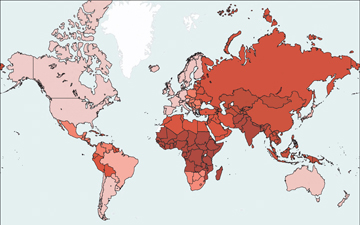 Proportion of population without access to safe, affordable surgery and anesthesia, ranging from near zero percent (pale pink) to near 100 percent (darkest red). Image: The Lancet Commission on Global Surgery

Proportion of population without access to safe, affordable surgery and anesthesia, ranging from near zero percent (pale pink) to near 100 percent (darkest red). Image: The Lancet Commission on Global Surgery

A map can tell you where you are, and it can also help lead to where you want to be.

The findings of the landmark Lancet Commission on Global Surgery report, which includes publications in seven academic journals and a series of teaching cases, are an assessment of the current state of need for surgery worldwide in resource-poor settings. The report also outlines steps that commissioners say will lead not just toward improved access to surgery for people around the world, but toward sustainable universal health care.

On May 6, the Commission held the Boston launch of the report at Harvard Medical School. The event was focused on the contributions that care providers, academic medical centers, industry and donor organizations in the developed world can make toward these goals. A series of similar events will take place around the world.

John Meara, the HMS Steven C. and Carmella R. Kletjian Professor of Global Health and Social Medicine in the Field of Global Surgery and lead author of the report, outlined the history of the commission process and pointed the way toward the future.

“We started with a clear vision,” said Meara, who is also HMS associate professor of surgery at Boston Children’s Hospital. “Universal access to safe, affordable, surgical care and anesthesia.”

The study more than doubled previous estimates of unmet need for surgical care, finding that 5 billion people are unable to access safe, timely affordable surgery and anesthesia. This leads to 18.6 million preventable early deaths each year, surpassing the number of people who die from HIV/AIDS, malaria and tuberculosis combined. To meet these needs, researchers calculated that an additional 143 million more surgical procedures were needed annually.

As if the costs in human life and health weren’t enough, the lack of surgical access also has dire economic costs:  33 million individuals face catastrophic expenditures that will plummet them into extreme poverty if they seek surgical care, and many low- and middle-income countries are fast approaching the point where losses in productivity from people hurt or killed by lack of access to proper surgical care will cost 2 percent of GDP.

“We call it a launch for a reason. It’s not the end of the journey. We have a long way to go, and we’re going to have to work together,” Meara said.

In spite of the human and economic costs, the Commission found that surgery is not only affordable, it is actually a high return investment, saving lives and preventing economic loss that far outweighs the costs of providing necessary care.

Reaching the necessary levels of access to surgery by 2030 would require an investment of $420 billion, the commission found. That investment would save an estimated $12 trillion in lost GDP over the same period, they found. Researchers at the launch noted that these estimate make surgery a “best buy” in global health.

“We have to think in a fundamentally different way about health care and surgery’s role in it in developing countries,” Jim Yong Kim, president of the World Bank and former head of the HMS Department of Global Health and Social Medicine, said in a taped video address. Kim and others also noted that, since surgery is crucial to health, it is an essential part of economic development.

“Without surgery, sustainable economic development is a fairy tale, a laughable fiction,” said Gavin Yamey, associate professor of epidemiology and biostatics at the University of California, San Francisco School of Medicine.

Throughout the day, speakers focused on the power of collaboration and accompaniment and emphasized that surgery is an indivisible and indispensible part of health care delivery. To accomplish these goals, surgeons will need to work with educators and students, clinicians and community health workers, hospital administrators and logistics experts. Speakers also emphasized the importance of integration, collaboration, broad-scale systems development, and building local capacity through training.

Many speakers highlighted the importance of creating pathways to unleash the passion, skills and commitment of young people throughout the world who want to make a career in global surgery.

The report features several “heat maps” that plot the availability of surgery and the supply of surgical professionals by country. In his afternoon keynote address, Paul Farmer, the Kolokotrones University Professor of Global Health and Social Medicine at Harvard and head of the HMS Department of Global Health and Social Medicine, noted that the areas in the maps that indicate the greatest unmet surgical need correspond almost exactly to the countries that are undergoing what some call a “youth tsunami.”

Farmer suggested that instead of thinking of this coming wave of young people as a destructive, crashing force, we should see them as a source of enthusiasm, energy and innovation.

“We have to think of them not just as potential patients, but as future colleagues in global health and global surgery,” Farmer said.