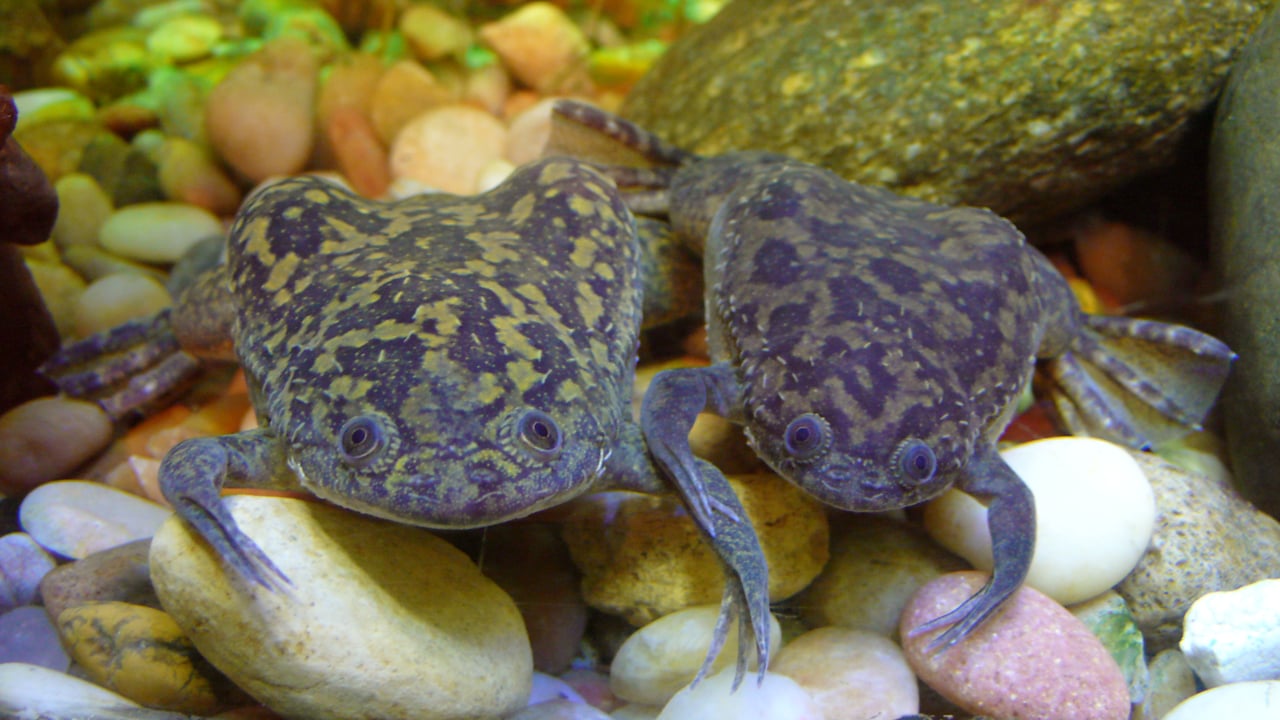 For more than half a century, studies on the African clawed frog (Xenopus laevis) have helped scientists better understand the biological underpinnings of life, from embryonic development and neurobiology to genetics and disease.

The frog’s claims to fame include the Nobel Prize-winning discovery that adult cell fate can be reprogrammed, and it once served as the world’s only reliable pregnancy test.

Now, new technologies are allowing scientists to learn even more about the fundamental processes that drive biology from these homely model organisms.

Reporting in the Proceedings of the National Academy of Sciences, a team led by Harvard Medical School systems biologist Marc Kirschner describes a new approach for identifying and measuring changes in thousands of proteins as Xenopus eggs undergo fertilization.

Their research reveals previously opaque aspects of the molecular mechanisms involved in fertilization, including details of how fertilization triggers the destruction of a small number of low-abundance proteins to release the “brakes” on an egg’s cell cycle, and how the egg rapidly releases vast amounts of protein to help prevent fertilization by multiple sperm cells.

The results enable comprehensive analyses of protein dynamics in a cell within a narrow window of time, the researchers said, which can inform studies of molecular behaviors in a wide range of biological systems and help shed light on cellular changes that drive disease.

“We have developed a method that provides us with a critically important ability to quantify and measure absolute levels of proteins and protein modifications in a dynamic, complex system,” said Kirschner, the John Franklin Enders University Professor of Systems Biology and chair of the Department of Systems Biology at HMS.

“The method should be widely used in many biological and biomedical studies,” Kirschner added.

Xenopus eggs have been used for decades to investigate the molecular events that occur during fertilization, shedding light on cell cycle, cell division and embryonic development.

Though much is known from years of study, scientists still have an incomplete understanding of many aspects of fertilization due to technical limitations—in particular, a comprehensive picture of the proteins involved, their functions and what happens to them over time.

With colleagues Marc Presler and Elizabeth Van Itallie, graduate students in systems biology at HMS, and Allon Klein and Steven Gygi, professors of systems biology and cell biology at HMS, Kirschner and the research team used a technique to label proteins in Xenopus eggs with barcode-like chemical tags, allowing the scientists to analyze thousands of proteins at once using mass spectrometry.

When coupled with a new analytical methodology, this approach allowed the team to measure the absolute levels of proteins in a cell and reveal details about a protein’s phosphorylation—one of the primary chemical modifications that cells use to regulate the activity of a protein.

Taking measurements during and up to 20 minutes after fertilization, the researchers found that levels of a small number of low-abundance proteins quickly drop.

Within a few minutes, the destruction of these proteins causes the reverse of phosphorylation of a much broader range of proteins throughout the cell—a process that promotes the completion of the cell cycle, including the separation of chromosome copies, which prepares the egg for further growth.

While only around 0.01 percent of the total protein mass of the cell was degraded, the team found that fertilization also triggers the expulsion of 50 times this amount of protein from the cell. Primarily stored in cell compartments near the membrane, these sets of proteins are likely secreted to help prevent fertilization by multiple sperm cells, the researchers said.

This release coincides with a substantial uptick in phosphorylation for numerous signaling proteins and others that play a role in generating contraction waves on the surface of the egg immediately after fertilization.

The egg also secretes several protein-degrading enzymes outside the cell, which researchers suspect helps block multiple fertilization events by destroying sperm-binding proteins. In a somewhat paradoxical finding, the team also observed an increase in proteins that inhibit the activity of protein-degrading enzymes. The reasons, however, remain unclear and present an avenue for future studies.

“We were able to observe both new and previously known features of the cell cycle, but we were also able to untangle other major events happening in parallel,” Presler said. “Fertilization occurs through the coordination of thousands of molecules at once, and for the first time we have an opportunity to understand it at this scale.”

The new methodology enables measures of the absolute levels of proteins and phosphorylation through a combination of technological and mathematical approaches. It represents a significant improvement over commonly used large-scale protein analyses that can make the accurate prediction of functional differences challenging.

By significantly improving the detail and scale at which scientists can study protein composition and modifications, even across narrow windows of time, the team believes these techniques can be applied to many biological systems.

“To understand and cure disease, we need a more precise understanding of what is happening in normal, healthy processes,” Presler said. “We asked what the molecular differences between a fertilized and unfertilized egg were, but this approach is immediately applicable for studying other important questions, such as the differences between cells that are in healthy and disease states.”

“Protein biochemistry drives much of the function of a cell, and this methodology can give us a more complete picture of how cells do what they do,” he said.

This work was supported by the National Institutes of Health (HD091846, HD073104, GM103785, GM39565), a Charles A. King Trust Postdoctoral Fellowship, Princeton University and a Burroughs Wellcome Fund and Mallinckrodt Award.