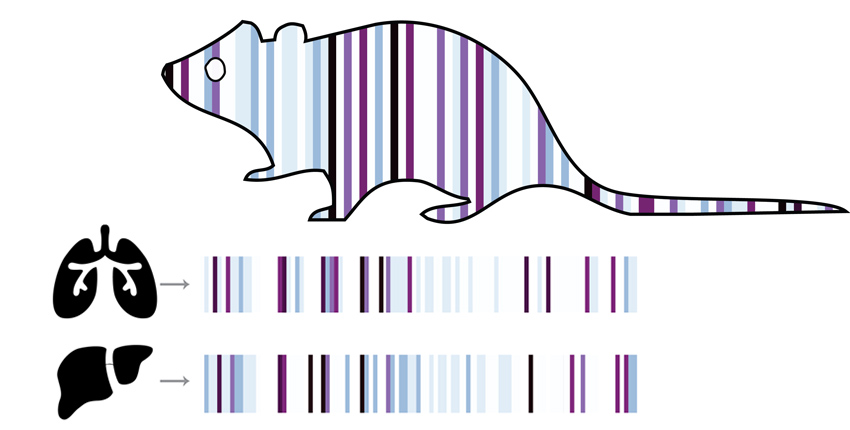 Using genetic barcodes, scientists can compare mutation patterns between cells in different parts of the body and determine when those parts developed and how closely related they are. Image: Wyss Institute at Harvard University

All humans begin life as a single cell that divides repeatedly to form two, then four, then eight cells, all the way up to the approximately 26 billion cells that make up a newborn.

Tracing how and when those 26 billion cells arise from one zygote is the grand challenge of developmental biology, a field that has so far only been able to capture and analyze snapshots of the development process.

A new method developed by scientists at Harvard Medical School and the Wyss Institute for Biologically Inspired Engineering at Harvard finally brings that daunting task into the realm of possibility. The team used evolving genetic barcodes to actively record the process of cell division in developing mice, enabling the lineage of every cell in a mouse’s body to be traced back to its single-celled origin.

The research was published online Aug. 9 in Science.

“Current lineage-tracking methods can only show snapshots in time, because you have to physically stop the development process to see how the cells look at each stage, almost like looking at individual frames of a motion picture,” said senior author George Church, the Robert Winthrop Professor of Genetics at HMS and a founding core faculty member at the Wyss.

“This barcode recording method allows us to reconstruct the complete history of every mature cell’s development, which is like playing the full motion picture backwards in real time,” Church said.

The genetic barcodes are created using a special type of DNA sequence that encodes a modified RNA molecule called a homing guide RNA (hgRNA), which was developed in a previous paper.

hgRNA molecules are engineered such that when the enzyme Cas9 (of CRISPR-Cas9 fame) is present, the hgRNA will guide the Cas9 to its own hgRNA sequence in the genome, which Cas9 then cuts. When the cell repairs that cut, it can introduce genetic mutations in the hgRNA sequence, which accumulate over time to create a unique barcode.

The researchers implemented the hgRNA-Cas9 system in mice by creating a “founder mouse” that had 60 different hgRNA sequences scattered throughout its genome. They then crossed the founder mouse with mice that expressed the Cas9 protein, producing zygotes whose hgRNA sequences started being cut and mutated shortly after fertilization.

“In every single cell that the zygote divides to become, there’s a chance that its hgRNAs will mutate,” explained first author Reza Kalhor, a postdoctoral research fellow in the Church lab at HMS and the Wyss. “In each generation, all the cells acquire their own unique mutations in addition to the ones they inherit from their mother cell, so we can trace how closely related different cells are by comparing which mutations they have.”

Each hgRNA can produce hundreds of mutant alleles; collectively, they can generate a unique barcode that contains the full developmental lineage of each of the approximately 10 billion cells in an adult mouse.

The ability to continuously record cells’ development also allowed the researchers to resolve a longstanding question regarding the embryonic brain: Does it distinguish its front from its back end first, or its left from its right side first?

“This method allows us to take the final developmental stage of a model organism and from there reconstruct a full lineage tree all the way back to its single-cell stage,” said Church. “It’s an ambitious goal that will certainly take many labs several years to realize, but this paper represents an important step in getting there.”

The researchers are now focusing on improving their readout techniques so they can analyze the barcodes of individual cells and reconstruct the lineage tree that has been recorded.

“Being able to record cells continuously over time is a huge milestone in developmental biology that promises to exponentially increase our understanding of the process by which a single cell grows to form to an adult animal and, if applied to disease models, it could provide entirely new insights into how diseases, such as cancer, emerge,” said Donald Ingber, founding director of the Wyss, the Judah Folkman Professor of Vascular Biology at HMS and Boston Children’s Hospital and professor of bioengineering at Harvard’s John A. Paulson School of Engineering and Applied Sciences.

Additional authors of the paper include Kian Kalhor from Sharif University of Technology in Tehran, Iran; Leo Mejia, a research assistant at HMS; Kathleen Leeper and Amanda Graveline from the Wyss and Prashant Mali from the University of California, San Diego. 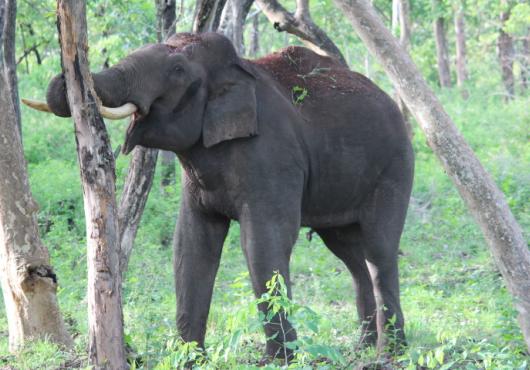