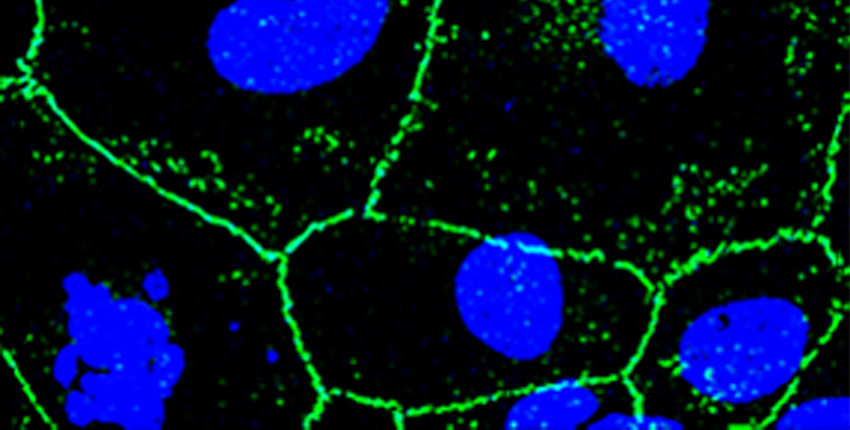 Exposure of mouse corneas to Ultraviolet A (UVA) light induces the progressive disruption of the hexagonal monolayer of corneal endothelium with enlarged and irregular cells preferentially in females recapitulating the clinical presentation of Fuchs endothelial corneal dystrophy patients. Image: Mass. Eye and Ear

Researchers have, for the first time, shown a mechanism that advances understanding in why the condition affects only certain portions of the eye and why women tend to be far more likely to be diagnosed.

Specifically, they found that exposure to ultraviolet A light sets off an enzyme reaction that causes the DNA damage seen in patients with FECD, a reaction the team found was far more pronounced in females. The researchers were able to replicate this damage in mouse models and human cornea cell tissue. The study was published Dec. 17 in PNAS.

FECD is a complex disorder with multiple genetic factors that cause the disease to manifest in a similar way despite the different backgrounds, explained lead study author Ula Jurkunas, HMS associate professor of ophthalmology and a corneal and refractive surgeon at Mass. Eye and Ear. That idea drove the team to look for unifying mechanisms on a cellular level, regardless of genetics, she said.

“This research finally offers an explanation for clinical observations that ophthalmologists have long seen in patients with this complex disorder,” Jurkunas said. “It is so crucially important to identify modifiable risk factors for genetic diseases like FECD, as it enables clinicians to tell our patients that there might be ways to reduce risk for the disease regardless of genetics.”

FECD is a vision disorder that typically starts for people between their 50s and 60s, when they experience symptoms such as blurry vision in the morning, significant glare from headlights and other light sources and visual disturbances that can last a whole day. Ophthalmologists conduct their diagnostic procedure based on a clinical exam, including a slit lamp exam and measures of corneal thickness and swelling using specular microscopy, a noninvasive imaging method .

Some studies have estimated that 1 to 4 percent of the U.S. population have FECD, and research has shown that the disease is far more common in women. FECD is a leading cause of corneal transplantation worldwide, with an estimated 75 percent of these transplants occurring in women.

Partial thickness corneal transplant, also known as Descemet membrane endothelial keratoplasty, is the most common surgical treatment, in addition to experimental therapies such as Descemet stripping without endothelial keratoplasty. Much research over the past decade has looked closely at genetic factors that cause FECD, but until now, a study has not reported an underlying mechanism that may represent a modifiable risk factor.

Jurkunas noted clinical observations of hundreds of patients showing similarities such as FECD-caused scarring that always occurred in the center of the back layer of the central cornea, while the periphery often remained clear and unaffected by disease. The center of the cornea is what gets light exposure, so the team postulated that UV light exposure may play a role in the disease.

They put this to the test by exposing the central cornea in adult mice to UVA light, where they were able to induce formation of Fuchs dystrophy. This was confirmed through years of additional testing.

Next, they came across a more unexpected finding, that female mice were more likely to have more severe and earlier onset of FECD compared to males. Knowing from clinical observation and previous research that females were more affected than males and more likely to get surgery for FECD, Jurkunas and her team wanted to see if the UVA light somehow played a role in the sex differences.

They tested this theory by exposing a human corneal endothelial cell culture to UVA light in a petri dish. They then discovered a novel pathway where the UVA light causes increased expression of the enzyme CYP1B1,which jump-starts an estrogen metabolite pathway that interacts with the DNA to damage it. This increased estrogen formation correlates with the sex-dependent differences in disease presentation, they reported.

Many people get significant exposure to UV light but not all get the disease. More epidemiological studies are needed to better determine this risk, but for now, clinicians should recommend that patients at risk for FECD due to genetics use protective eyewear.

“That is the mechanism that explains what we have been seeing in our patients,” said Jurkunas. “We tell our patients with cataracts and macular degeneration to avoid exposure to UVA light, and our study suggests we should start telling our Fuchs patients as well.”

Adapted from a Mass. Eye and Ear Focus blog post.