A Legacy of Deciphering Toxins

John Collier on the infectious, incurable allure of scientific discovery 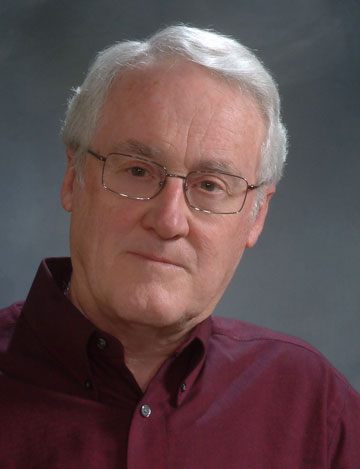 John Collier, the HMS Maude and Lillian Presley Professor of Microbiology and Immunobiology Emeritus, has translated the thrill of scientific discovery into a career dedicated to understanding how bacterial toxins work and their relationship to disease.

Now, recently retired, he reminisces that he wasn’t always headed towards a career in scientific research. Born into a family of small-town doctors in the American Southwest, when he was growing up Collier believed that he would most likely continue in the family tradition.

As an undergraduate at Rice University, however, Collier spent much of his free time in the laboratory of Allen Enders, who was interested in using electron microscopy to study cell structure. Enders recognized Collier’s passion for science and encouraged him to apply to graduate school as well as medical school.

Collier said that his interest in basic science ultimately won out in part because of a career-changing encounter with a Harvard professor interested in the biochemistry of an infectious disease.

Harvard and the Study of Diphtheria

Collier entered the PhD program in biology at Harvard University in 1959. It was there that he was introduced to Alwin M. Pappenheimer Jr., who was studying the biochemical basis of diphtheria.

Few physicians today have seen diphtheria in a clinical setting. Yet, not so long ago, diphtheria was a childhood scourge that caused the death of countless children (and had nearly claimed the life of Collier’s father). Mass immunization programs led to the eradication of the disease in the U.S., and by the 1950s diphtheria was no longer a serious medical threat.

The disease was nonetheless of considerable scientific interest, in part because the major symptoms of diphtheria were attributable to the action of a single protein, diphtheria toxin, produced by the bacterium.

It was a chemically inactivated form of this toxin used in the vaccine that resulted in a nearly complete eradication of diphtheria in much of the world. Collier became intrigued with the idea that by understanding the mechanism the diphtheria toxin used to kill human cells, scientists could reveal how a bacterium caused the death of a human. This mechanism was not known at the time for any infectious disease.

Collier’s doctoral thesis research, and his subsequent postdoctoral studies at the University of Geneva, revealed fundamental aspects of how the diphtheria toxin acts. It showed that the toxin enters cells and inactivates the machinery the cell uses to make its own proteins.

Diphtheria toxin violated the tenet that “proteins don’t cross membranes,” and thus it was different from all other proteins known at the time.

Collier’s findings represented the first instance in which the action of a bacterial toxin was identified.

Research in laboratories around the globe would later show that a large number of bacterial toxins, causing the symptoms of cholera, whooping cough, tetanus, botulism, anthrax and other diseases, share the ability to cross a cellular membrane and act on molecules inside a cell.

Collier said that his early discoveries sent him “into emotional orbit” and served as the foundation for what would become decades of groundbreaking discoveries from his lab.

After completing his postdoctoral training, Collier accepted a position at UCLA and began what would prove to be a career-long interest in understanding how molecules like the diphtheria toxin were constructed.

“I wanted to understand what was unique about this protein that enabled it to cross a membrane and attack an intracellular target,” he said, and his studies eventually uncovered features common among the kinds of toxins that act inside cells.

Using the diphtheria toxin as a model, he established the paradigm that toxins capable of crossing membrane do so though an “A-B” arrangement.

In this arrangement, toxins consist of two complementary components: an active (A), which acts within cells, and a supportive (B), which transports the A component into the cell.

“John’s lab was super clean,” said Mekalanos, “indicative of his attention to detail and reflective of his training as a biochemist. He was always focused on making sure that the experiment was well controlled and properly designed.”

Collier’s approach to science served as an important lesson for Mekalanos as he set out on his own career.

“It allowed me to quickly pick up the new techniques that were being adopted in labs all over and to eventually become a meticulous molecular biologist,” Mekalanos said.

“Walking into Collier’s lab one could feel the excitement and buzz of an intellectual and creative atmosphere that all of us tried to reproduce once we started our own research programs. John’s passion for science and the process of discovery was infectious," Lory said.

Collier moved to Boston in 1984 and joined HMS as a member of what was then the Department of Microbiology and Molecular Genetics. Here he continued his studies on bacterial toxins, ultimately solving the structure of the diphtheria toxin molecule through a continuing collaboration with David Eisenberg at UCLA.

Theresa Koehler, now a professor at the University of Texas Health Sciences Center at Houston, joined Collier’s lab in 1988 to study the toxin complex that causes symptoms of the bacterial disease anthrax. This toxin would soon become the major focus of Collier’s research, long before anthrax was thrust into the public view in 2001.

Collier capitalized on his interest and deep knowledge of bacterial toxins to produce a detailed understanding of how the anthrax toxin’s components were transported into cells, as well as structural aspects of the toxin molecules.

He would also be one of the first to elucidate the structure of a membrane-spanning pore formed by a toxin molecule acting inside a cell.

Collier’s work on bacterial toxins serves as the foundation for new therapies against human diseases. His identification of a specific mutation that rendered diphtheria toxin inactive influenced the development of a vaccine against pertussis which is now used in mass vaccinations.

The emergence of antibody-drug conjugates and immunotoxins (antibodies coupled to toxic proteins, including bacterial toxins) have their origins in the early work done by Collier to define the structural parts of the diphtheria toxin and other bacterial toxin molecules.

Collier leaves a legacy of having trained some of the leading bacteriologists of his time. Colleagues recognize his ability to identify the important scientific questions, the rigor of his research, his lucid writing and his unassuming nature.

The significance of his work was recognized by his election to the National Academy of Sciences in 1991, as well as by his many honors and awards, including the Eli Lilly Award, the Paul Ehrlich Prize, the Selman A. Waksman Award, the Bristol-Myers Squibb Infectious Disease Research Award, and the Abbott-ASM Lifetime Achievement Award.

Collier and his wife, Joan, have been married for more than 50 years and have three daughters and seven grandchildren.

Joan worries about how her husband might adjust to retirement.

“He’s always had two families—his scientific one, and this one,” she said.

“Once you’ve experienced scientific discovery,” Collier said, “it’s forever a part of your emotional makeup—you can’t be cured. Fortunately, phenomenal discoveries are published every week that sustain the excitement, and one can take vicarious pride in the discoveries made by colleagues and former students.”