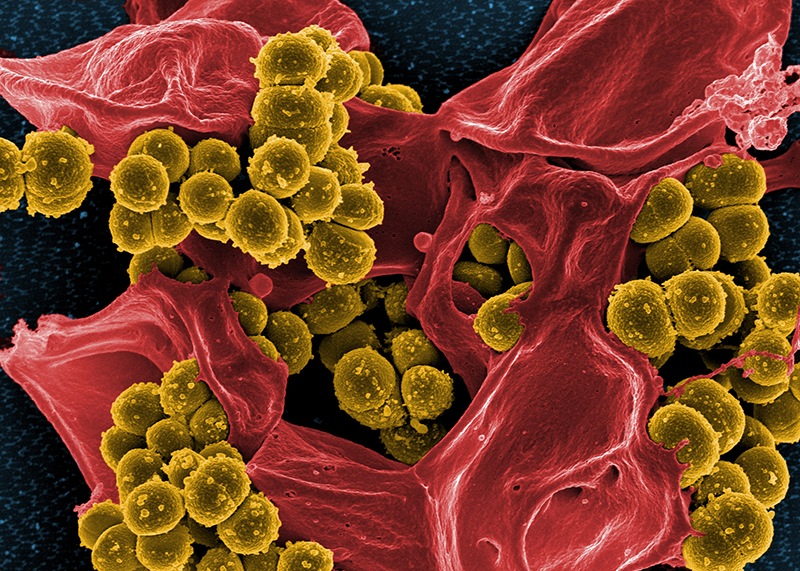 Infections of the skin or other soft tissues by the hard-to-treat MRSA (methicillin-resistant Staphylococcus aureus) bacteria appear to permanently compromise the lymphatic system, which is crucial to immune system function.

In a report published online in Science Translational Medicine, Harvard Medical School investigators based at Massachusetts General Hospital describe findings that MRSA infection impairs the ability of lymphatic vessels to pump lymphatic fluid to lymph nodes in mouse models, which may contribute to the frequent recurrences of MRSA infection experienced by patients.

“MRSA with a genetic deficiency that lowers the amount of toxin produced does not kill lymphatic muscle cells, which both supports the role for bacterial toxins in the post-MRSA impairment of lymphatic function and may also suggest a possible treatment strategy,” he added.

Serious skin infections called cellulitis are reported in about 14 million U.S. patients annually, with as many as 30 percent caused by MRSA. Serious cases requiring intravenous antibiotics lead to 500,000 hospitalizations each year, and 50,000 of those patients will have recurrent infections that require hospital readmission within a month.

Patients with lymphedema—swelling and fluid buildup caused by damage to or blockage of the lymphatic system—are particularly prone to recurrent infections, which can exacerbate existing lymphedema. But until now, no studies have investigated the potential interactions between bacterial infections and lymphatic function.

In contrast to the cardiovascular system, in which blood is propelled through arteries and veins by the pumping of the heart, in the lymphatic system, lymphatic fluid—which carries immune cells and other important factors—is pumped along by the contraction of the lymphatic vessels, driven by lymphatic muscle cells.

Experiments in mouse models of MRSA tissue infections revealed that the infection itself cleared within 30 days and associated inflammation was gone within 60 days. But the lymphatic vessels in MRSA-infected tissues showed abnormalities, including increased vessel diameter and weaker, less frequent contractions, that were still present 120 days after the induction of infection.

Close examination revealed that the number of lymphatic muscle cells surrounding lymphatic vessels was depleted as late as 260 days after infection.

“We had assumed that we would find results similar to our previous measures of impaired lymphatic function in inflammation that was not associated with an infection,” Padera said. “But while lymph pumping was restored after the resolution of sterile inflammation, MRSA-induced impairment persisted long after the infection was resolved and the inflammation had stopped.”

“This persistence long after bacteria have been cleared can be explained by the loss of lymphatic muscle cells,” he said.

Exposure of cultured mouse and human lymphatic or smooth muscle cells to the proteins produced by MRSA led to the death of these cells, and detailed analysis of MRSA-produced proteins identified a significant number of known pathogenic toxins.

Since expression of many MRSA toxins is controlled by a genetic element called the accessory gene regulator (agr), the team tested a mutant form of MRSA lacking the agr against several types of cultured cells and in their animal model.

The agr-mutant MRSA did not produce the muscle cell-killing proteins, and lymphatic function—including the strength and frequency of vessel contraction—was significantly better in mice infected with the mutant strain than in animals infected with a nonmutated strain.