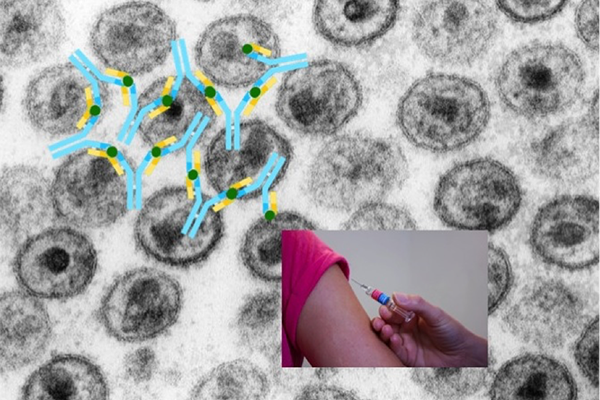 Sometimes HIV-infected people can produce such antibodies on their own. But this usually requires years of exposure to the virus, allowing the immune system to modify its antibodies over time to keep up with HIV mutations, and generally occurs too late to prevent infection.

“Only a small fraction of patients are able to develop broadly neutralizing antibodies, and by the time they do, the virus has already integrated into the genomes of their T-cells,” said Ming Tian, lecturer on genetics at Harvard Medical School and a research associate in the Program in Cellular and Molecular Medicine (PCMM) at Boston Children’s Hospital.

Tian is part of a group led by HMS Professor of Genetics and PCMM Director Frederick Alt that has developed a technology to greatly speed up HIV development.

People exposed to HIV (or any pathogen) first make precursor antibodies, which then mature via mutation and natural selection—an evolution-like process that makes the antibodies more protective over time.

“This is a long-term process involving many intermediate antibodies, making it very challenging to design HIV vaccines to protect uninfected individuals,” said Alt, who is also the Charles A. Janeway Professor of Pediatrics at Boston Children’s and co-senior author on the paper.

“To facilitate this effort, we wanted to design a new type of humanized mouse model that would be more physiological and allow us to very quickly test new vaccination strategies,” he said.

How do broadly neutralizing antibodies to HIV naturally arise? The team began with the basic components of the known human antibody response to HIV.

Our immune system’s B lymphocytes assemble antibody genes from building blocks known as V (variable), D (diversity) and J (joining) segments. Through various V-D-J combinations, our B lymphocytes are able to produce enormous numbers of different antibodies—enough to recognize almost any invader.

After a B cell recognizes a pathogen, it further mutates the V-D-J sequence, often in successive steps, enabling its progeny B cells to produce even stronger antibodies.

Prior work had revealed the structure of broadly neutralizing antibodies against HIV and deduced the V-D-J combinations that constituted their precursors. The team inserted the corresponding DNA into mouse embryonic stem cells.

The researchers then used the modified embryonic stem cells to rapidly generate mice whose B cells were primed to assemble a highly diverse set of HIV antibody precursors—combining the human precursor broadly neutralizing antibody V segment with various D or J segments.

The mice began by making immature “ancestor” antibodies. Collaborators at the National Institute of Allergy and Infectious Diseases’ Vaccine Research Center, together with colleagues at the Duke Human Vaccine Institute, the Scripps Research Institute, the Fred Hutchinson Cancer Research Center and other institutes, then sequentially exposed the Alt lab’s test mice to a series of specially designed HIV antigens.

Through this sequential exposure, the animals’ B cells “learned” to produce ever more diverse and effective humanized antibodies that eventually were able to neutralize some HIV viral strains.

“Rather than go through generations of mouse breeding to make models, our approach allows us to quickly delete and replace genomic elements to create changes in B cells,” explained Alt.

“Thus, we can rapidly reprogram this mouse model with the intermediate antibody genes selected from the first successful immunizations and expose them to new antigens,” said Alt. “Over time, we hope this process will lead to the generation of broadly neutralizing HIV antibodies.”

As the engineered antigens engaged the system, upping the ante each time, the researchers could watch the antibodies acquire mutations.

“You move the B cells in a direction and find out what works and the potential hang ups,” said Alt. “You then work to figure out how to next adapt the mouse model and the immunogens to eventually get to a broadly neutralizing antibody stage.”

There’s still a long way to go, but Alt believes the technology could hasten the search for a truly effective HIV vaccine, as well as vaccines against other viruses.

“We’re hoping it will be broadly useful,” Alt said.

The study was supported by the National Institute of Allergy and Infectious Diseases of the National Institutes of Health (R01AI077595, AI020047, P01AI094419, U19AI109632), the NIH Center for HIV/AIDS Vaccine Immunology and Immunogen Discovery (AI100645, 5UM1AI100645, 1UM1AI100663), the International AIDS Vaccine Initiative Neutralizing Antibody Consortium, the Collaboration for AIDS Vaccine Discovery, the NIAID Vaccine Research Center, the Howard Hughes Medical Institute and the Ragon Institute of MGH, MIT and Harvard.