By OFFICE FOR ACADEMIC AND CLINICAL AFFAIRS September 5, 2013 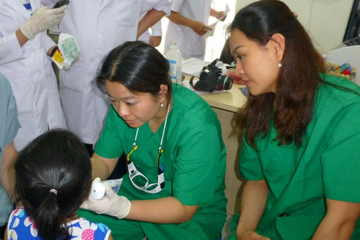 During a visit to her native country of Vietnam as a medical volunteer, Thanh-Nga Tran was struck by the tremendous medical and social needs of children with disfiguring birthmarks from hemangiomas and other vascular anomalies.

“Many hemangiomas ulcerate during their growth phase, causing severe pain and a high risk of infection and scarring. Aside from the potential physical disability, psycho-social problems can occur in children who have been forced to live with a facial deformity during the formation of their initial self-image,” said Tran, HMS clinical instructor in dermatology at Massachusetts General Hospital.

Tran’s concerns for these children were augmented by their lack of access to modern health care and the prevalent use of outdated treatments that have the potential to result in further disfigurement.

From this experience, Tran was inspired to start a free clinic to treat children with vascular anomalies while simultaneously educating Vietnamese physicians about modern treatments.

Working with a team of collaborators from the United States and an established dermatologist in Vietnam, Tran co-founded the first vascular anomalies center in Ho Chi Minh City in 2009.

In recognition of her efforts, Tran was recently recognized by the 2013 Dean’s Community Service Award sponsored by the HMS Office for Diversity, Inclusion and Community Partnership.

“The goal is to have the Vietnam vascular anomalies center closely model treatment centers in the U.S., where difficult cases that require multidisciplinary efforts are presented amongst member physicians and treatment options are outlined,” said Tran.

During the past five years, the center has evaluated more than 3,000 children and treated more than 700. It has also developed an affiliation with the Ho Chi Minh City Medicine and Pharmacy University that has facilitated international collaboration in teaching and research.

For example, Tran and co-founder Richard Rox Anderson, HMS professor of dermatology at Mass General have recently launched a clinical trial in collaboration with their Vietnamese colleagues to assess whether early treatment of hemangiomas can prevent their subsequent growth and reduce the potential for disfigurement in affected children.

Tran and her team members find continued sources of inspiration and personal satisfaction in the hundreds of children that they have successfully treated over the years.

“We love the children. And we have learned so much in the past five years. The ability to learn from each other, to exchange ideas, to set up a clinic from scratch and see it blooming, to be able to help jump start research and educational programs in dermatology in Vietnam, to give back, to help children who would go otherwise go through life with disfiguring birthmarks is tremendously rewarding,” said Tran.

“The 2013 award recipients, selected from 86 outstanding nominations, have made tremendous contributions to diverse populations on an impressively broad scale, from treating vascular birth defects in underserved children in Vietnam, to enhancing the health and educational needs of Tanzania’s impoverished youth,” wrote Dean Jeffrey Flier in his Dean’s Corner blog. “I am honored to recognize the countless hours they devote to advancing our mission of outreach and service.”