Balbiani bodies, labeled “BB” in these images of an immature frog egg (left) and immature human egg (right, larger scale), hold organelles together in one spot next to the nucleus, “n,” in the months or years before an egg matures. Images: Elvan Boke (left), Arthur Hertig (right)

Researchers don’t yet know how immature egg cells, or oocytes, survive and protect their contents while they lie dormant for years in a woman’s ovaries, waiting for hormonal signals that ready them for fertilization.

One of the most striking features of an oocyte, the Balbiani body is a membraneless ball of mitochondria, other organelles and proteins that breaks apart when the oocyte begins maturing into an egg, releasing the organelles into the cytoplasm. But Balbiani bodies have been slow to reveal their secrets.

“How do they form and disperse? How do they stay together without a membrane? What is their biological function? Are the organelles inside active or in a special state?” asked Boke.

Boke and colleagues at HMS and the Max Planck Institute of Molecular Cell Biology and Genetics in Dresden, Germany, report online in Cell on July 28 that in the oocytes of Xenopus frogs, which have long been used as a model organism for fertility research, the contents of Balbiani bodies are bound together by a protein called Xvelo that clumps into a dense network of amyloid fibers.

“Amyloids have a scary reputation as the causative agents of neurodegenerative diseases, but we know relatively little about their possible normal functions,” said Timothy Mitchison, the Hasib Sabbagh Professor of Systems Biology at HMS and senior author of the study. “Discovering that Xvelo makes an amyloid to bind the Balbiani body is exciting because it provides one of the few emerging examples of a normal amyloid.”

Because Xvelo loses its amyloid-like configuration as the egg matures, the researchers think the frogs’ Balbiani bodies could hold clues for how to break up toxic amyloids seen in human diseases such as Alzheimer’s and ALS.

At a fundamental level, the study is notable because “we found that cells can use a protein to create a compartment from scratch,” said Boke, the study’s first author. “This scale of cytoplasmic organization hadn’t been reported before.”

“Similar to packing your winter clothes in summertime, we think the dormant oocyte packs away the majority of its organelle and RNA content when it’s not needed,” Boke added. “It’s unpacked when the oocyte activates and it’s time to use them.”

The team’s hypothesis is based in part on a body of research connecting Balbiani bodies to fertility in frogs and zebrafish.

“In these organisms, Balbiani bodies give rise to germ plasm, which protects RNA and mitochondria,” said Boke. “Without germ plasm, the animals can become infertile.”

If further research shows that Balbiani bodies are indeed critical for keeping eggs viable for long periods of time, it could have implications for human egg freezing and fertility treatments.

“Women’s fertility has been understudied, though fertility problems touch many families,” said Mitchison. “We are proud to make a contribution to understanding eggs, which are fascinating cells with a central role in the continuation of our species.” 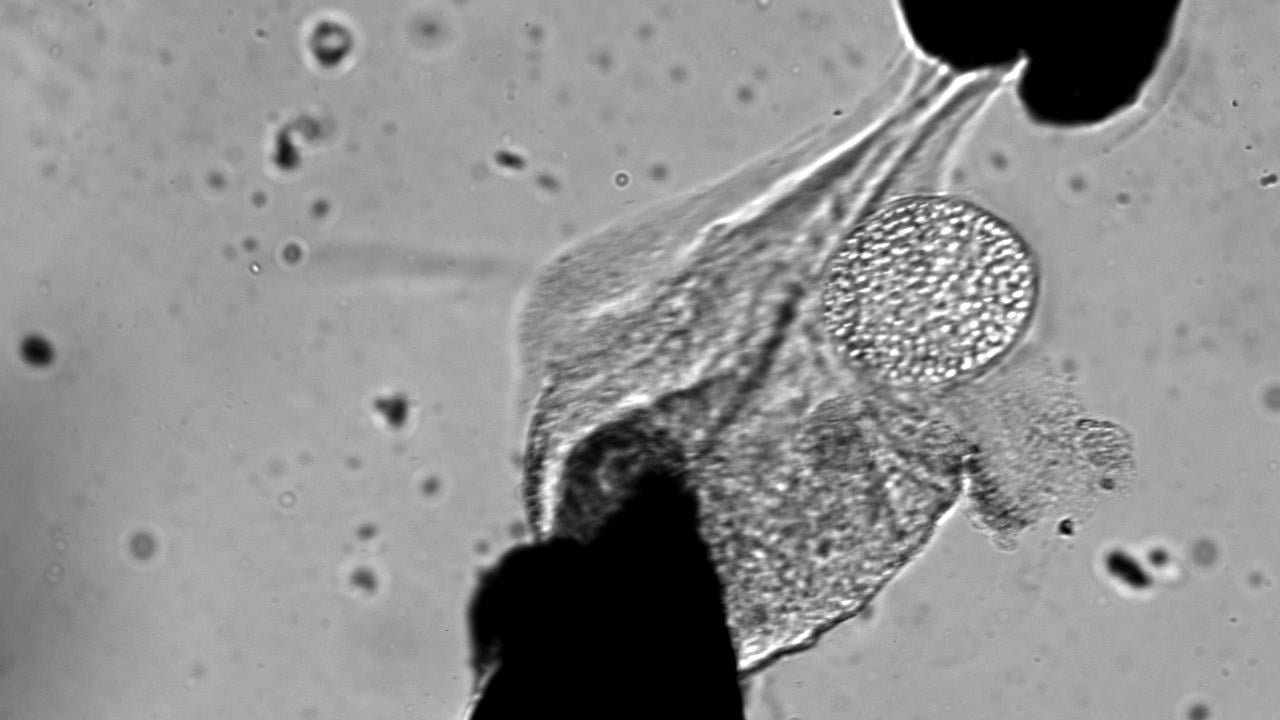 Harvesting a Balbiani body from a frog oocyte under a microscope. Video: Elvan Boke

The team’s discoveries were made possible in part because Boke tried something that no one else, to her knowledge, had done: Gambling that the object of her interest would be tough enough to withstand the procedure, she pulled apart a frog oocyte under a microscope and harvested an intact Balbiani body.

Isolating Balbiani bodies in petri dishes allowed Boke to generate a list of their protein and RNA components. She partnered with the lab of HMS professor of cell biology Steven Gygi, whose advanced proteomic technology helped her identify the proteins in Balbiani bodies and discover that Xvelo was incredibly concentrated inside them. Xvelo was the only protein that her experiments showed could drive Balbiani-body formation.

“Human eggs have Balbiani bodies, so they presumably contain a protein like Xvelo, but it has not been identified yet,” said Mitchison. “Elvan’s research tells us its likely biochemical properties, which will help in its identification.”

Although Xvelo isn’t well conserved in evolution, it does have counterparts—bucky ball in zebrafish, oskar in fruit flies, MEG-3 in Caenorhabditis elegans worms—that are responsible for organizing Balbiani bodies or equivalent structures. Despite different genetic sequences, those proteins all have something in common: a portion of their structure called a prion-like domain that makes them likely to self-assemble.

The researchers determined that Xvelo has one of these domains as well. When they removed it by mutating the gene for Xvelo, the protein no longer aggregated.

“Pathological amyloids don’t go away, but the amyloids in Balbiani bodies dissolve upon maturation of the oocyte, which could be important for understanding how to make ‘bad’ amyloids disappear,” said Boke.

Although Balbiani bodies in mammals have been difficult to study, Boke hopes researchers will build on her team’s work by trying to find a homolog of Xvelo in mice and knock out its gene. She also hopes to investigate Balbiani bodies in dormant human oocytes.

This study was supported by the National Institutes of Health (grant GM39565) and the Max Planck Society.