Many kids grow up with hydrogen peroxide. Moms dab the store-bought solution on scraped fingers to stave off infection. Teens use it to bleach their hair. Now it seems that the compound, which is naturally produced in the body, may serve as an alarm that draws healing cells to the site of a wound.

Using zebrafish as an animal model, researchers in the labs of Timothy Mitchison, the Hasib Sabbagh professor of systems biology at HMS, and Thomas Look, an HMS professor of pediatrics at Dana-Farber Cancer Institute and Children’s Hospital Boston, have discovered that when the tail fins of these fish are injured, a burst of hydrogen peroxide is released into the surrounding tissue. Teams of white blood cells respond to the alarm, crawl to the site, and start their damage control duties. These findings are reported in the June 4 Nature. 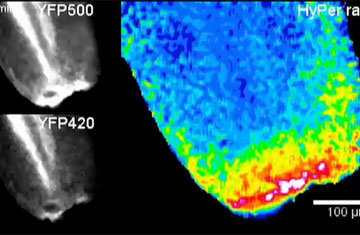 Using the zebrafish as an animal model, researchers have discovered that the body uses hydrogen peroxide to sound the alarm when a tissue has been injured. In the zebrafish tail fin imaged here, a small wound is inflicted at the tip of the fin. Red represents high concentrations of hydrogen peroxide and blue represents low concentrations. The chemical burst far exceeds the single cell diameter and reaches well into the surrounding tissue.

“We’ve known for quite some time that when the body is wounded, white blood cells show up, and it’s really a spectacular piece of biology because these cells detect the wound at some distance,” said Mitchison. “But we haven’t known what they’re responding to. We do know something about what summons white blood cells to areas that are chronically inflamed, but in the case of an isolated physical wound, we haven’t really known what the signal is.”

Philipp Niethammer, a postdoc in Mitchison’s lab, and Clemmens Grabber, a postdoc in Look’s lab, initiated the project without any interest in wound healing whatsoever. Rather, they were studying a group of molecules called reactive oxygen species (ROS). These small oxygen-derived molecules, including hydrogen peroxide, can be both helpful and hurtful. Niethammer and Grabber were seeking ways to detect ROS molecules in an organism.

They repeated the experiment, this time in zebrafish that were missing a protein that was previously discovered to produce hydrogen peroxide in the human thyroid gland. Not only did hydrogen peroxide not appear at the wound site, but white blood cells failed to respond to the injury.

It is not yet clear that these findings are relevant to humans. Yet they suggest a shift in understanding human conditions in which hydrogen peroxide may play a role. The compound—and the proteins responsible for producing other ROS molecules—are especially numerous in the lung and gut. So the researchers hypothesize that human diseases relevant to these findings would include any affecting the lung and gut that involve disproportionate levels of white blood cells, like asthma, chronic pulmonary obstruction, and some inflammatory gut diseases.

“Our lungs are supposed to be sterile; our guts are anything but,” said Mitchison. “It’s very logical that both those tissues produce hydrogen peroxide all the time. Perhaps in conditions like asthma, the lung epithelium is producing too much hydrogen peroxide because it’s chronically irritated, which, if our findings translate to humans, would explain inappropriate levels of white blood cells. This is certainly a question worth pursuing.”

Mitchison is currently laying the groundwork for investigating this hypothesis.

Students may contact Timothy Mitchison at timothy_mitchison@hms.harvard.edu or Thomas Look at thomas_look@dfci.harvard.edu for more information.

Conflict Disclosure: The authors declare no conflicts of interest