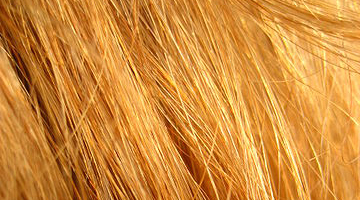 A person’s skin pigment, which determines hair color and skin tone, is influenced by the melanocortin-1 (MC1R) gene receptor. For the population’s 1 to 2 percent of redheads, a mutation in MC1R accounts for their red hair color and typical light skin.

Melanoma is the least common but the most lethal of skin cancers. Accounting for 75 percent of all skin-cancer deaths, melanoma originates in pigment-producing skin cells called melanocytes. Melanoma is believed to be a multistep process (melanomagenesis) of genetic mutations that increase cell proliferation, cell differentiation and cell death and increase an individual’s susceptibility to ultraviolet (UV) radiation. Two types of UV radiation—UVA and UVB—can mutate DNA in skin cells and lead to melanoma.

“In this current study, we have demonstrated that the mutation MC1R-RHC promotes the PI3K/Akt signaling pathway when a red-haired individual is exposed to UV radiation,” explained co-senior author Wenyi Wei, an HMS associate professor of pathology at Beth Israel Deaconess Medical Center. PI3K/Akt is a well-known cancer-causing pathway that has been implicated in breast cancer, ovarian cancer and lung cancer.

Previous work by the study’s co-senior author, Rutao Cui of the Boston University Department of Dermatology, had demonstrated that MC1R plays a key role in protecting melanocytes from UV-induced DNA damage. In this current study, Wei and Cui wanted to find out how this was happening.

Led by co-first authors Lixin Wan, an HMS instructor in pathology at Beth Israel Deaconess, and Juxiang Cao at BU, the scientific team embarked on a series of experiments in both cell cultures and mouse models. Their experiments showed that in normal circumstances, MC1R was binding to PTEN, a well-known tumor-suppressor gene. PTEN acts to safeguard against cancer; without PTEN, the end result is elevated signaling in the cancer-causing P13K/Akt pathway.

The team then went on to demonstrate that MC1R-RHC mutations found in red-haired individuals lacked this protective mechanism. “As a result, upon UVB exposure, we saw an increased destruction of PTEN in the mutated pigment cells,” said Wei. The team additionally found that in these same MC1R-RHC pigment cells, elevated PI3K/Akt activity was boosting cell proliferation and was synchronizing with another well-known cancer mutation in the BRAF gene (found in nearly 70 percent of human melanomas) to further accelerate cancer development. In support of these results, noted Wei and Cui, another research group at Massachusetts General Hospital recently demonstrated that expression of the BRAF gene mutation in the melanocytes of mice carrying a mutated MC1R gene led to a high incidence of invasive melanomas.

“Together, our findings provide a possible molecular mechanism as to why red-haired individuals harboring MC1R mutations are much more susceptible to UV-induced skin damage than individuals with darker skin, resulting in a 10- to 100-fold higher frequency of melanoma,” said Wei.

The authors noted that this newly established link between MC1R and PTEN will be a starting point for future studies, adding that it remains unclear why only MC1R genetic variants linked to the red-hair phenotype—but not all MC1R variants—are unable to bind to PTEN following UV exposure.

“We think that MC1R variants, in combination with mutations in the BRAF gene, could be used as markers of an increased risk of developing melanoma,” explained Wei. The authors added that these new findings suggest that drug inhibitors that target the PI3K/Akt signaling pathway might be used in combination with Vemurafenib, a drug that targets the BRAF oncogenic protein, to treat melanoma patients who have both BRAF and MC1R variants.

This work was supported by grants from the National Institutes of Health (1RO1CA137098; UL1-TR000157; GM089763), the American Cancer Society, the Harry J. Lloyd Charitable Trust, the National Health and Medical Research Council of Australia; the National Basic Research Program of China; the Key Program of the National Natural Science Foundation of China; and the Program for Changjiang Scholars and Innovative Research Team in University.