Ever since it was discovered that adult humans harbor appreciable amounts of brown fat, investigators have been working to better understand its thermogenic fat-burning properties with the ultimate goal of developing novel therapies to combat obesity and diabetes. 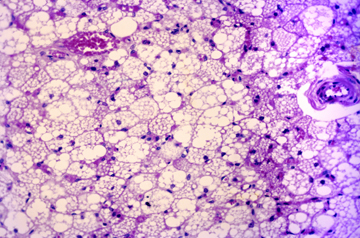 “The discovery several years ago that brown fat plays an active role in metabolism suggested that if we could manipulate the number or activity of these fat cells, we could force our bodies to burn extra calories,” explained the study’s senior author, Evan Rosen, HMS associate professor of medicine at Beth Israel Deaconess’ Division of Endocrinology, Diabetes and Metabolism. “Now that we have identified a major factor driving this process, we can look for new approaches to exploit this for therapeutic benefit.”

Turned on by low temperatures and by certain hormones and drugs, including epinephrine, brown fat generates heat through the actions of a group of genes collectively termed the thermogenic gene expression program, the best known of which encodes uncoupling protein 1 (UCP1). UCP1 dissipates, or wastes, energy in the mitochondria of brown fat cells, causing heat generation as a byproduct.

“There has been intense interest in how the UCP1 gene is regulated, with most attention focused on a molecule called PGC1-alpha,” explained Rosen. “PGC1-alpha was discovered 15 years ago in the lab of coauthor Bruce Spiegelman, and is a transcriptional cofactor, which means that it indirectly drives the transcription of genes like UCP1 because it lacks the ability to bind to DNA itself. This suggested that there must be a bona fide transcription factor, or DNA binding protein, that was mediating the effects of PGC-1-alpha, but despite years of work and several promising candidates, no clear partner for PGC-1-alpha had been discovered to increase thermogenesis. It turns out that IRF4 is that partner.”

Interferon regulatory factors (IRFs) play important roles in the regulation of the immune system. Rosen’s group had previously identified IRF4 as a key element in adipocyte development and lipid handling, having discovered that IRF4 expression is induced by fasting in fat and that animals that lack IRF4 in adipose tissue are obese, insulin resistant and cold intolerant.

In this new work, led by first author Xingxing Kong, a postdoctoral fellow in the Rosen lab, the scientists hypothesized that in addition to serving as a key regulator of lipolysis, IRF4 might also play a direct thermogenic role in brown fat.

Experiments in mouse models confirmed their hypothesis, demonstrating that IRF4 is induced by cold and cAMP in adipocytes and is sufficient to promote increased thermogenic gene expression, energy expenditure and cold tolerance. Conversely, loss of IRF4 in brown fat resulted in reduced thermogenic gene expression and energy expenditure, obesity and cold intolerance. Finally, the researchers showed that IRF4 physically interacts with PGC-1-alpha to promote UCP1 expression and thermogenesis.

“We’ve known a lot about how these genes are turned on by cold or when stimulated by catecholamine drugs such as epinephrine,” explained Rosen. “But we didn’t know what was turning on this gene program at the molecular level. With this new discovery of IRF4’s key transcriptional role, perhaps we can identify new drug targets that directly affect this pathway, which might be more specific than simply giving epinephrine-like drugs, which drive up heart rate and blood pressure.”