Hospital Observation Units Could Save $3.1 Billion  in US Health Costs

New research suggests that maximizing the potential of observation units in hospitals could result in significant cost savings.

Previous research has shown that observation units in a hospital can be an efficient way to care for certain patients, but only about one-third of hospitals in the U.S. have such units.  Now, researchers at Brigham and Women’s Hospital estimate that maximizing the potential of an observation unit in a hospital could result in $4.6 million in savings annually for the hospital and $3.1 billion in overall savings for the health care system in the U.S. These findings were published online by Health Affairs and will also appear in the journal’s October issue.

“We believe that this is the first attempt to quantify the financial impact of an observation unit,” said HMS instructor in medicine Christopher Baugh, lead researcher on the paper and a physician in the emergency department at Brigham and Women’s. “Wider use of observation units may play a significant role in saving cost for the health care system, and future policies that are focused on doing so should include support for observation units as an alternative to short-stay inpatient admission,” Baugh said. 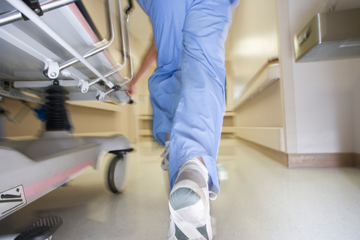 An observation unit, a dedicated space typically near or within the emergency department, is an alternative to inpatient admission and is dedicated to caring for patients, usually for a 24-hour period, who have been discharged from the emergency department (ED) but require further observation and are not ready to safely leave the hospital.  Previous research has shown that care in these units is equal or better in quality compared with inpatient care for certain patient populations.

Researchers used national survey data and published research to determine the average cost saving per observation unit and the number of hospitals that would benefit from an observation unit.  They created a simulation model with a method frequently used to evaluate risk in business when there are many uncertain variables.

Based on this model, researchers report that the average amount saved per patient, after adjusting for inflation, could total $1,572 per visit to the observation unit compared with an inpatient admission.  Overall, the national cost savings could be as much as $3.1 billion annually if the potential of observation units were maximized.  This savings is due largely to 2.4 million fewer inpatient admissions.

Additionally, researchers report that for hospitals with large enough volume to justify the operation of an observation unit, the annual cost saving for such a hospital would be $4.6 million, resulting from approximately 3,600 inpatient admissions avoided.  Hospitals that would fit into this category include all those with more than 50,000 annual ED visits and many hospitals with 20,000 to 50,000 annual ED visits.

“In the wake of health care reform and increased scrutiny of the cost of health care, the health care system is under pressure to maintain quality care while decreasing cost. Observation units represent a feasible way to achieve this goal and merit further evaluation as a model for acute care redesign to increase the value of care provided throughout the country,” Baugh said.

Adapted from a Brigham and Women's Hospital news release.