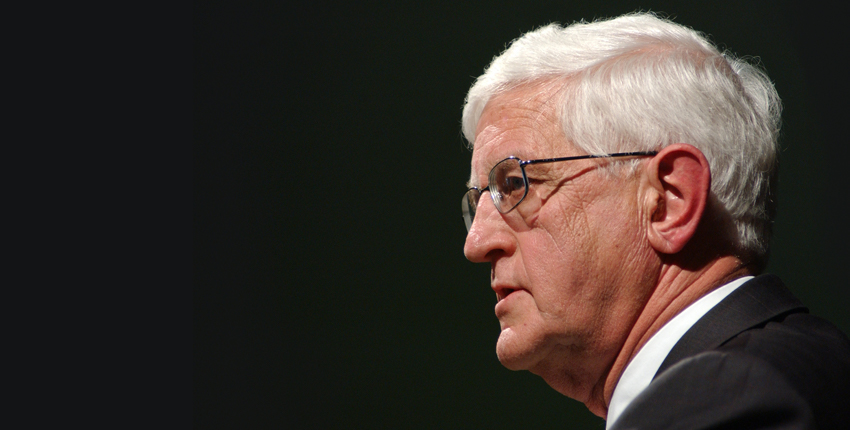 Joseph Martin, the Edward R. and Anne G. Lefler Professor of Neurobiology, Emeritus, at Harvard Medical School, and dean of HMS from 1997 to 2007, is among six Canadian medical scientists named for induction to the Canadian Medical Hall of Fame for his ability to promote collaboration in building and expanding the institutional foundations of medical education and science in North America.

“Receiving this honor makes one reflect on how opportunities in life are brought to one through serendipity and that the key to accomplishing anything is only with the help of others,” said Martin.

The award was announced Oct. 10 by William Orovan, chair of the Canadian Medical Hall of Fame.

“The Canadian Medical Hall of Fame is proud to welcome these six individuals whose outstanding contributions to health have made Canada, and the world, a better place,” said Orovan. “Their impact is well-documented and they have earned their place alongside our 137 laureates.”

The Canadian Medical Hall of Fame issued a statement that said Martin has had an extraordinary career as a scientist, physician and administrator, helping to establish the discipline of neuroendocrinology and serving for 10 years as dean of HMS.

Martin, who was born in Bassano, Alberta, Canada, was distinguished for his ability to promote collaboration in building and expanding the institutional foundations of medical education and science in both Canada and the United States, according to the Canadian Medical Hall of Fame.

Martin received his premedical and medical education at the University of Alberta, Edmonton, earning his MD in 1962. He completed a residency in neurology and a fellowship in neuropathology at Case Western Reserve University and received his PhD in anatomy from the University of Rochester. He then joined McGill University in Montreal where he became chair of the Department of Neurology and Neurosurgery, but soon joined the HMS faculty in 1978 as the Bullard Professor of Neurology, becoming chief of the neurology service at Massachusetts General Hospital.

Martin’s legacy includes groundbreaking early work in the genetics of Huntington’s disease and Alzheimer’s disease; developing an NIH-sponsored Huntington’s disease research center at Mass General; creating an expanded campus at the University of California, San Francisco, which was devoted to biomedical, bioengineering and global health research when he was dean there; establishing the Alberta Heritage Foundation for Medical Research; and helping establish the Dana-Farber/Harvard Cancer Center. Martin was a key figure in the development of the Ontario Brain Institute, where he served as co-chair of the organizing committee.

Having authored more than 200 peer-reviewed articles and co-edited Harrison’s Principles of Medicine, one of the standard medical textbooks in North America, Martin is known for his honesty and the ability to inspire trust, according to the Canadian Medical Hall of Fame, which added that the continued advancement of medical science depends increasingly on the skills exemplified by Martin.

“This year’s honorees have made tremendous contributions to the advancement and improvements of medicine and health sciences, and we are thrilled to see them recognized today,” said Sandy Buchman, president of the Canadian Medical Association.

Martin and the other inductees will be celebrated at a ceremony in April 2020 in Vancouver, British Columbia.