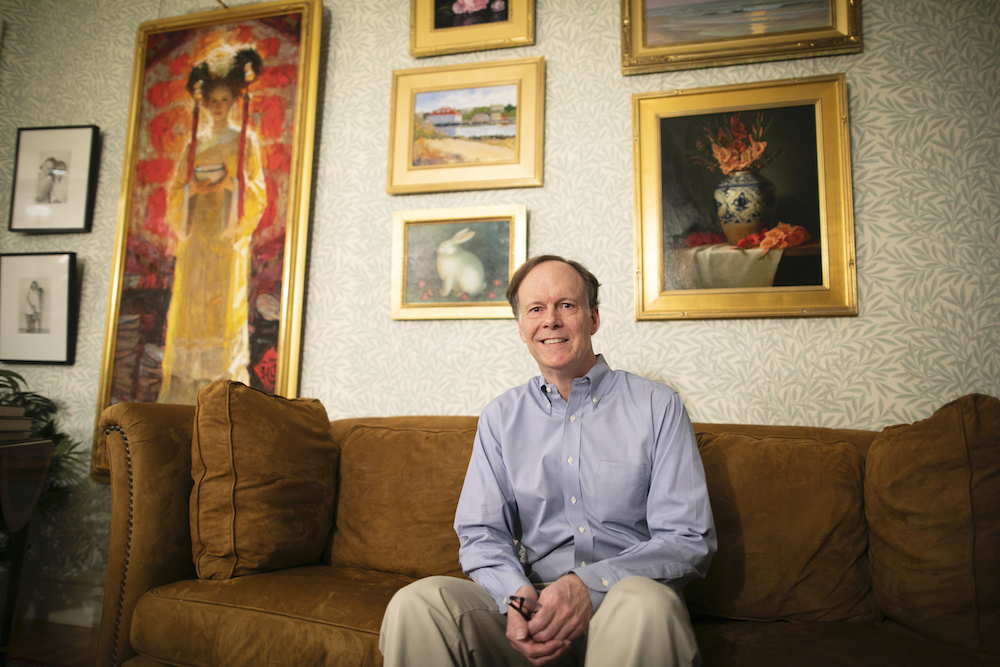 William G. Kaelin Jr., the Sidney Farber Professor of Medicine at Harvard Medical School and Dana-Farber Cancer Institute and senior physician in medicine at Brigham and Women's Hospital, has won the 2019 Nobel Prize in Physiology or Medicine, the Royal Swedish Academy of Sciences announced on Oct. 7.

Kaelin shares the award with Peter J. Ratcliffe of the University of Oxford and the Francis Crick Institute and Gregg L. Semenza of the Johns Hopkins University School of Medicine, who were cited for the discovery of the molecular pathway used by all multicellular organisms to sense and adapt to changes in oxygen, a process essential for survival.

Kaelin is now the 16th researcher to share in a Nobel Prize for work done while at Harvard Medical School.

Kaelin said he was awakened by a phone call at 4:50 a.m. and answered, still foggy with sleep. When he saw a long international number, he thought he might have a busy day ahead.

“My heart started racing, I was overwhelmed,” he said of his reaction to hearing the news.

Kaelin said his first call was to his daughter, Kathryn, in law school at Oxford, and then to his son, William "Tripp" Kaelin III, a graduate student at Harvard.

"I've known Bill for a number of years now, and he is the consummate physician-scientist. He is fiercely dedicated to rigor and excellence both in the laboratory and in the clinic. Bill Kaelin is the finest that medicine has to offer, and it is a privilege to be able to offer my congratulations to Bill, Peter and Gregg," said HMS Dean George Q. Daley at a morning news conference at Dana-Farber, attended by Kaelin, Laurie Glimcher, Dana-Farber president and CEO, and Elizabeth Nabel, president of Brigham Health.

At the news conference, Kaelin said he was accepting the Nobel partly on behalf of his late wife, Carolyn Kaelin, who was an HMS assistant professor of surgery and a breast cancer surgeon at Dana-Farber and Brigham and Women's.

"She was a pioneering breast surgeon, and she was my best friend and hero and partner in everything I did. And to be honest, there were a couple years after I lost her that I thought, 'Please, not a prize,' because it would just be too bittersweet and it would be too crushing to receive such a wonderful recognition without Carolyn," said Kaelin. "But I’m at a point now where I’d like to think she’s smiling down and nodding and saying, ‘I told you this was going to happen.’" 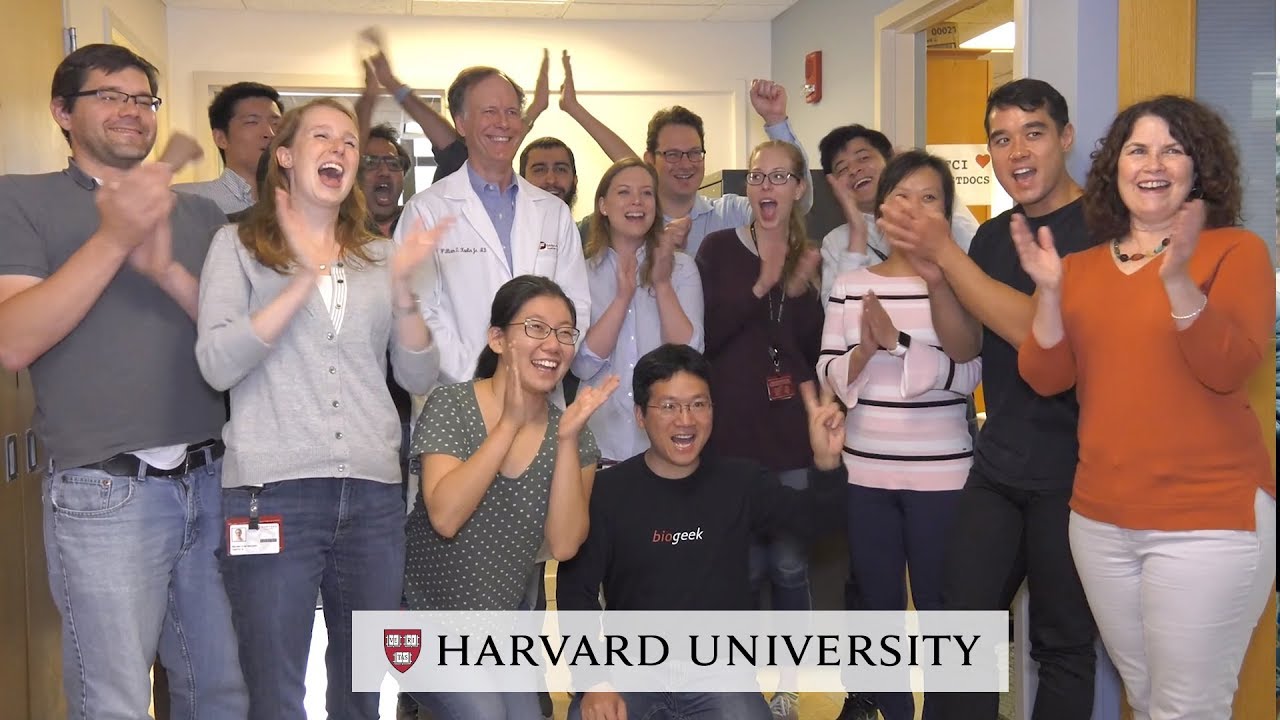 Kaelin’s research explores how mutations in tumor-suppressor genes can lead to cancer. His early efforts focused on a rare, hereditary syndrome called von Hippel-Lindau disease, which is caused by defects to the tumor-suppressor gene VHL. Patients with this condition develop tumors, both benign and malignant, in multiple organs in early adulthood.

Strikingly, Kaelin noted, these tumors overproduce chemical distress signals that would normally be sent by cells when starved for oxygen—signals that stimulate the production of red blood cells, the formation of new blood vessels, changes in cellular metabolism and more.

“When I was young, my father’s favorite activity was fishing. Part of the secret is knowing where to fish, and there’s a lot of guesswork involved,” Kaelin said. “One thing I got right, I think, was understanding that von Hippel-Lindau disease was a good place to go fishing.”

Kaelin said the discovery of this connection proved to be an important clue. By 1996, Kaelin showed that cells lacking the VHL gene and its associated protein were incapable of sensing oxygen. Over the next several years, he and other researchers shed light on the function of VHL, including the finding that cells lacking VHL protein were unable to degrade a protein called HIF-1-alpha, which is a master regulator of the cellular response to low oxygen levels.

In 2001, Kaelin and Ratcliffe independently worked out the final details of this mechanism. They showed conclusively that cells, under normal oxygen conditions, place a specific chemical tag on HIF-1-alpha, allowing the VHL protein to bind and destroy it. Without functional VHL, as in the case of von Hippel-Lindau disease, HIF-1-alpha aberrantly triggers the cellular response to low oxygen levels.

Kaelin said the discovery was very gratifying because there had been an array of varied, complex theories about how cells sense oxygen.

“When we saw the signal and understood what it meant, it was much simpler than expected,” Kaelin said. “We see it conserved across metazoan evolution.”

Together, the findings of the 2019 Nobel laureates paved the way for new treatment strategies for a wide range of disorders, including cardiovascular disease, cancer and anemia.

Kaelin served as a scientific advisor to Peloton Therapeutics, for example, which was acquired this spring by Merck for $1.05 billion based on promising small molecule candidates targeting HIF in certain cancers.

Kaelin said his discoveries underscore the importance of curiosity-driven research with uncertain outcomes. He emphasized how the translational aspect of his early research on a rare, largely unknown hereditary disease could not have been predicted.

“I’m a cancer biologist and physician, but the first true treatment out of my lab was for anemia. I always tell people that’s the way science works,” Kaelin said at the news conference. “The next big breakthrough for cancer might come from a person working down the hallway on a completely different cancer, or frankly, on some basic mechanism that we weren’t smart enough to understand was the key to the lock that got us back to cancer,” Kaelin said. “That’s why we double down on fundamental, mechanistic research.”

In her opening remarks at the news conference, Glimcher emphasized the transformative nature of Kaelin’s work.

“We’re truly in a revolutionary time for cancer care, and what Dr. Kaelin and his colleagues discovered is absolutely transformative,” Glimcher said. “This is all about the importance of understanding the basic biology of the human body, and it’s only from that understanding that we can best attack cancer. This marriage of basic science, clinical research and patient care is what is so powerful about what we do here at Dana-Farber.”

Nabel, a cardiovascular scientist, said the community is enormously grateful to Kaelin for his broad contributions to cancer research and beyond.

“The discoveries made by Bill and his colleagues have fundamentally defined how cells in the body sense oxygen and then respond to an abundance of oxygen or an absence of oxygen,” she said. “Bill’s work has had broad application across many fields of medicine: heart and vascular disease, pulmonary lung disease, kidney disease and many other organ systems that we care for in individuals who have those diseases, day in and day out.”

Kaelin has received numerous awards in recognition of his scientific contributions, including the 2016 Albert Lasker Basic Medical Research Award and the 2010 Canada Gairdner International Award, both shared jointly with his fellow 2019 Nobel laureates. He is an elected member of the National Academy of Medicine, the National Academy of Sciences and the Association of American Physicians.

Kaelin received his medical degree from Duke University in 1982 and was a house officer and chief resident in internal medicine at the Johns Hopkins Hospital. He became a medical oncology clinical fellow at Dana-Farber and a postdoctoral fellow in the laboratory of David Livingston, the Emil Frei Distinguished Professor of Medicine, where he began his studies of tumor-suppressor proteins. Kaelin was named an independent investigator at Dana-Farber in 1992 and a Howard Hughes Medical Institute investigator in 2002.

With Kaelin's award, 49 current and former Harvard faculty members have now received Nobels for wide-ranging work, including the tissue culture breakthrough that led to the creation of the polio vaccine, negotiations that led to an armistice in the 1948 Arab-Israeli War, the first description of the structure of DNA, pioneering procedures for organ transplants, the development of gross national product as a measure of economic change and much more.

The most recent Nobel awarded to a member of the HMS faculty was in 2009, when Jack Szostak, a genetics professor at HMS and Massachusetts General Hospital, won the Nobel Prize in Physiology or Medicine for his contributions to the discovery of telomerase. Szostak's work not only revealed a key cellular function, but also illuminated processes involved in disease and aging.

In his remarks at the news conference, Kaelin again emphasized how this type of transformative discovery can come about only from curiosity-driven research.

“You try to do deep mechanistic work, and you try to solve what you hoped were interesting, and maybe even in time, important puzzles,” he said. “If you did enough of that, eventually you might, if you were lucky, generate enough knowledge that you could say ‘Aha! I now understand this system so well I can actually do something therapeutically that I didn’t know was possible 10 years ago.’”

“But we know, over and over, that’s how real progress happens,” Kaelin said. 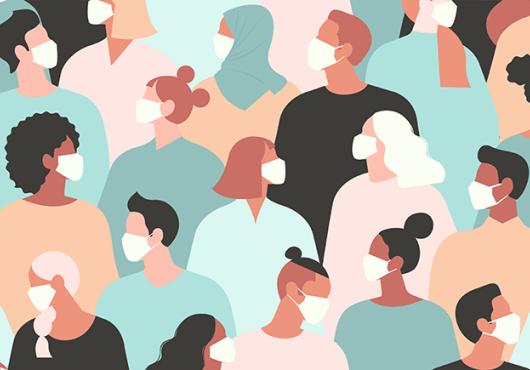 The Show Must Go On 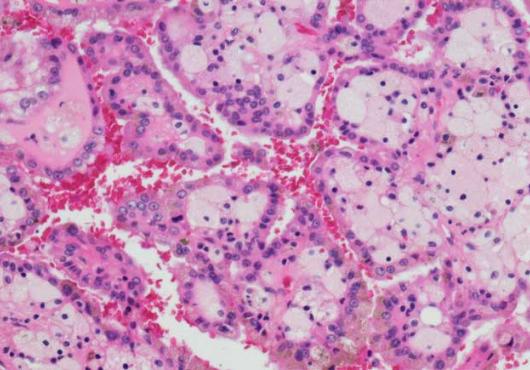 Personalized kidney cancer vaccine to be tested for first time