In promising therapy for deafness, hair cells regrown in ears of mice 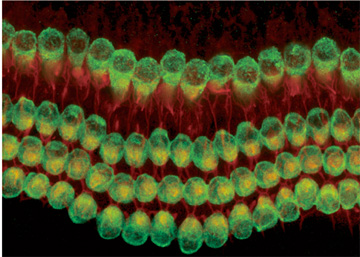 Researchers at Massachusetts Eye and Ear and Harvard Medical School have demonstrated for the first time that hair cells can be regenerated in an adult mammalian ear by using a drug to stimulate resident cells to become new hair cells, resulting in partial recovery of hearing in mouse ears damaged by noise trauma. This finding, reported in the Jan. 10 issue of Neuron, holds great potential for future therapeutic application that may someday reverse deafness in humans.

“Hair cells are the primary receptor cells for sound and are responsible for the sense of hearing,” explains senior author, Albert Edge, HMS associate professor of otology and laryngology at Mass. Eye and Ear. “We show that hair cells can be generated in a damaged cochlea and that hair cell replacement leads to an improvement in hearing.”

Hearing loss is a significant public health problem affecting close to 50 million people in the United States alone. Sensorineural hearing loss is the most common form and is caused by the loss of sensory hair cells in the cochlea. Hair cell loss results from a variety of factors including noise exposure, aging , toxins, infections, and certain antibiotics and anti-cancer drugs.  Although hearing aids and cochlear implants can ameliorate the symptoms somewhat, there are no known treatments to restore hearing, because auditory hair cells in mammals, unlike those in birds or fish, do not regenerate once lost. Auditory hair cell replacement holds great promise as a treatment that could restore hearing after loss of hair cells.

In the experiment, the researchers applied a drug to the cochlea of deaf mice. The drug had been selected for its ability to generate hair cells when added to stem cells isolated from the ear. It acted by inhibiting an enzyme called gamma-secretase that activates a number of cellular pathways. The drug applied to the cochlea inhibited a signal generated by a protein called Notch on the surface of cells that surround hair cells. These supporting cells turned into new hair cells upon treatment with the drug. Replacing hair cells improved hearing in the mice, and the improved hearing could be traced to the areas in which supporting cells had become new hair cells. “The missing hair cells had been replaced by new hair cells after the drug treatment,” Edge said, “and analysis of their location allowed us to correlate the improvement in hearing to the areas where the hair cells were replaced.”

Funding sources: This work was supported by grants RO1 DC007174, R21 DC010440 and P30 DC05209 from the National Institute on Deafness and other Communication Disorders (NIDCD); by the Tillotson Corporation, the Shulsky Foundation, and Robert Boucai; by the Mochida Memorial Foundation for Medical and Pharmaceutical Research; and by Grants for International Activities in Life Sciences and Medicine, Keio University Medical Science Fund.

A full list of authors and affiliations and full acknowledgement of all contributors is available in the pdf of the paper, “Notch Inhibition Induces Cochlear Hair Cell Regeneration and Recovery of Hearing after Acoustic Trauma.”

Mary Leach is director of public affairs for Massachusetts Eye and Ear.