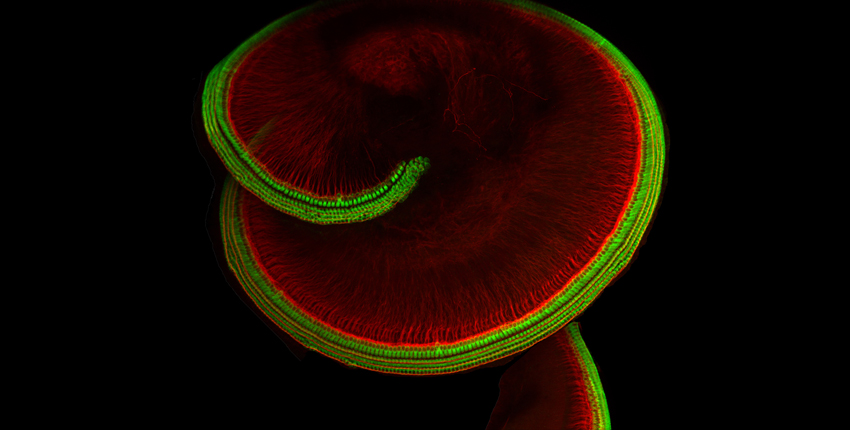 Scientists at Harvard Medical School say they have ended a 40-year-quest for the elusive identity of the sensor protein responsible for hearing and balance.

The results of their research, reported Aug. 22 in Neuron, reveal that TMC1, a protein discovered in 2002, forms a sound- and motion-activated pore that allows the conversion of sound and head movement into nerve signals that travel to the brain—a signaling cascade that enables hearing and balance.

Scientists have long known that when the delicate cells in our inner ear detect sound and movement, they convert them into signals. Where and how this conversion occurs has been the subject of intense scientific debate. No more, the authors say.

“The search for this sensor protein has led to numerous dead ends, but we think this discovery ends the quest,” said David Corey, co-senior author on the study and the Bertarelli Professor of Translational Medical Science at Harvard Medical School.

“We believe our findings settle that issue for good and yield definitive proof that TMC1 is the critical molecular sensor that converts sound and motion into electrical signals the brain can understand,” said co-senior author Jeffrey Holt, Harvard Medical School professor of otolaryngology and of neurology at Boston Children’s Hospital. “It is, indeed, the gatekeeper of hearing.”

The researchers say their findings lay the groundwork for precision-targeted therapies to treat hearing loss that occurs when the TMC1 molecular gate is malformed or missing.

“To design optimal treatments for hearing loss, we need to know the molecules and their structures where disease-causing malfunctions arise, and our findings are an important step in that direction,” Holt said.

The senses—vision, touch, taste, pain, smell and hearing—help animals navigate the world and survive in it. The conversion of sensory input into signals that travel to the brain for analysis and interpretation is central to this process.

The “molecular converters” for most senses have been identified. The one for hearing, however, remained elusive, partly due to the hard-to-access anatomical location of the inner ear—within the densest bone of the human body—and partly because of the comparatively few auditory cells available for retrieval, dissection and imaging. The human retina has a hundred million sensory cells, compared with a precious few 16,000 in the human inner ear.

As far back as the 19thcentury, scientists knew that cells located in the inner ear—called hair cells for the bristle-like tufts that line their surface—played a role in hearing. The stage was set in the late 1800s by Swedish physician and anatomist Gustaf Retzius, who described in detail the structure and cellular makeup of the inner ear.

The basics of signal propagation from the inner ear to the brain were elucidated in the 1970s. Scientists demonstrated that proteins in the membranes of hair cells could open, allowing the influx of electrically charged ions such as calcium and potassium. Once inside the cell, those ions initiate signal transmission to the brain.

Following the 2002 discovery of the TMC1 gene, research into its role languished for nearly a decade. In 2011, a team led by Holt demonstrated that TMC1 was required for auditory transduction in hair cells. The finding sparked a vigorous debate about the exact role TMC1 played: Was it a central character or part of the supporting cast? That debate has now been put to rest, Holt said.

In an initial set of experiments, the research team found that TMC1 proteins assemble in pairs to form sound-activated pores, or ion channels. Given that most ion-channel proteins form clusters of three to seven units, TMC1’s minimalistic pairing was a surprise. It also offered a helpful clue into its structure.

Next, to map out the molecular architecture of the TMC1 protein, the scientists turned to computer predictive modeling. Such models work by predicting the most probable arrangement of a protein’s building blocks based on the configuration of a close relative with a known structure. The algorithm revealed that TMC1’s closest relative with known structure was a protein known as TMEM16.

Each protein’s function is determined by its structure—the specific sequence and arrangement of amino acids, the building blocks of proteins. TMEM16’s amino acid arrangement yielded a possible amino acid model for TMC1.

But to verify the accuracy of the model and to pinpoint the precise location of the sound-activated pores, the researchers had to take their model out of the digital realm and into the real world of living hair cells of mice.

Substituting 17 amino acids—one at a time—the researchers gauged whether and how each single substitution altered the cells’ ability to respond to sound and allow the flow of ions.

Of the 17 amino acid substitutions, 11 altered the influx of ions, and five did so dramatically, reducing ion flow by up to 80 percent, compared with nonmodified cells. One particular substitution blocked calcium influx completely, a finding that confirmed the precise location of the pore that normally allows calcium and potassium influx to initiate signal transmission.

This approach, Corey said, was akin to what an engineer might do to figure out how each part of an engine works.

“Hair cells, like car engines, are complex machines that need to be studied as they are running,” Corey said. “You can’t figure out how a piston or a spark plug works by itself. You have to modify the part, put it back in the engine and then gauge its effect on performance.”

TMC1 is found in mammals, birds, fish, amphibians and reptiles—a sign of evolutionary conservation at work.

“The fact that evolution has conserved this protein across all vertebrate species underscores how critical it is for survival,” Holt said.

The ability to hear a sound and distinguish its meaning as a threat or a mere nuisance, for example, is crucial for biologic survival—think hearing the sound of a bear approaching in the woods. But among many higher species, hearing is also important for social bonding and interaction—think recognizing different voices or changes in voice patterns and intonation. The exquisitely complex ability to detect changes in intonation begins with the opening of a tiny molecular gate in TMC1.

“We now know that TMC1 forms the pore that enables sound detection in animals ranging from fish to birds to humans,” Corey said. “It is truly the protein that lets us hear.”

Engravings of a human inner ear by Gustaf Retzius, 1884, courtesy David Corey, HMS
Cochlea, the snail-shell-shaped structure in the inner ear that houses hair cells, as seen through an electron microscope, Holt lab, HMS
A cluster of hair cells, lined with bristle-like tufts that give these structures their name, Holt lab, HMS
A “molecular portrait” of the TCM1 protein, which converts sound and head movement into electrical signals the brain can understand, Holt lab, HMS