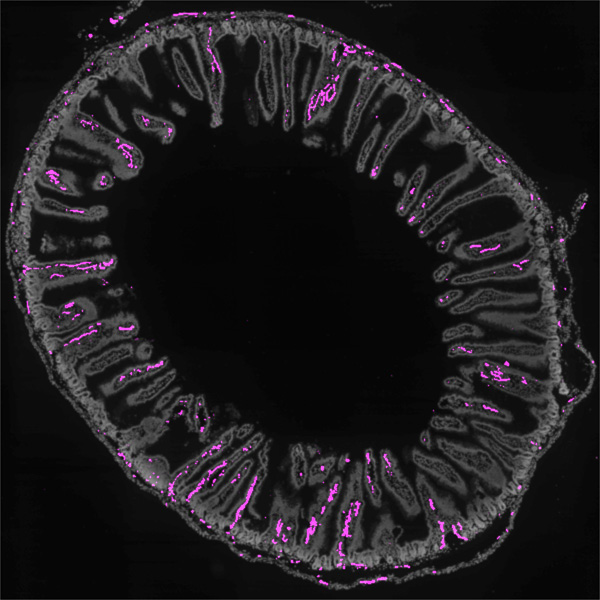 After eating a meal, you can thank your vagus nerve for sensing and signaling that feeling of fullness to your brain. That same nerve also detects nutrients and controls digestion.

The vagus has long been recognized as a remarkable internal sensory system, regulating breathing and heart rate among other functions. Yet how it receives the information it uses to perform these tasks has been less well-known.

To trigger that feeling of fullness, does just one wire need to be activated, or are there several that need to be activated? How is this sensory system organized to distinguish proteins from carbohydrates or lipids, and then how does it send messages to secrete enzymes that will digest each of them?

Peering into the gut-brain connection in mice, Harvard Medical School researchers led by Stephen Liberles discovered two distinct types of sensory neurons that survey the status of the gastrointestinal tract: one senses stretch in the stomach and one responds to the presence of nutrients in the intestine.

Their findings, published May 26 in Cell, have potential relevance for understanding how bariatric surgery not only achieves weight loss but also diminishes Type 2 diabetes. In addition to weight loss, the work may be relevant for disorders of intestinal motility, such as dyspepsia.

“Using genetic tools, we were able to classify two major cell types that differentially innervate the GI tract,” said Liberles, HMS associate professor of cell biology and senior author of the paper. “One cell type broadly accounts for several classes of stretch receptors in the stomach and intestine. Another cell type is completely different, detecting nutrients.

The neurons that sense stretch in the stomach produce receptors for glucagon-like peptide 1 (GLP-1), a hormone released from the intestine in response to the arrival of nutrients. GLP-1 analogs are powerful anti-diabetic drugs. While it might seem likely that neurons containing the GLP-1 receptor would respond to nutrients, the team’s experiments instead showed they were sensitive to mechanical stretch of the stomach and the intestine.

These neurons, the researchers found, project to the muscular wall of the stomach but not to the inner surface of the intestine where nutrient detection occurs. “That really caught our eye,” said Rui Chang, HMS research fellow in cell biology and co-first author of the paper.

Nutrients are detected by GPR65 neurons, which express receptors for the hormone serotonin. Specific in purpose, these neurons sense nutrients that travel through the intestine through projections that end in the intestinal villi, tiny peninsulas that line the intestine and aid in food absorption.

The GPR65 neurons held another surprise: They respond to all sorts of chemical cues from food in the intestine, whether that cue is a sugar or fat or protein or salt or a change in pH balance.

“Here you have one neuron informing the brain on just about everything,” Liberles said, “which is a much less specific role than we were expecting going in.”

Also unexpected was the finding that the two nerve cell types project to different regions within the same nucleus in the brain stem.

The two types form non-overlapping projection fields right next to each other, suggesting that each type sends information to different circuits in the brain,” said Erika Williams, an HMS graduate student in cell biology. “They are engaging different brain pathways and presumably then orchestrating different, multi-organ physiological responses.”

Liberles said there might be pharmaceutical targets for the regulation of food intake, perhaps the receptors that modulate responses to nutrients.

“The tools we used—optogenetics, imaging, and neural mapping—allowed us to paint a comprehensive picture of what these neurons do,” said Liberles. “That capability could in future studies help us understand how these neurons work at a molecular level: What are the key receptors that detect stretch of the stomach or nutrients in the intestine, or even other sensory cues outside the GI tract.”