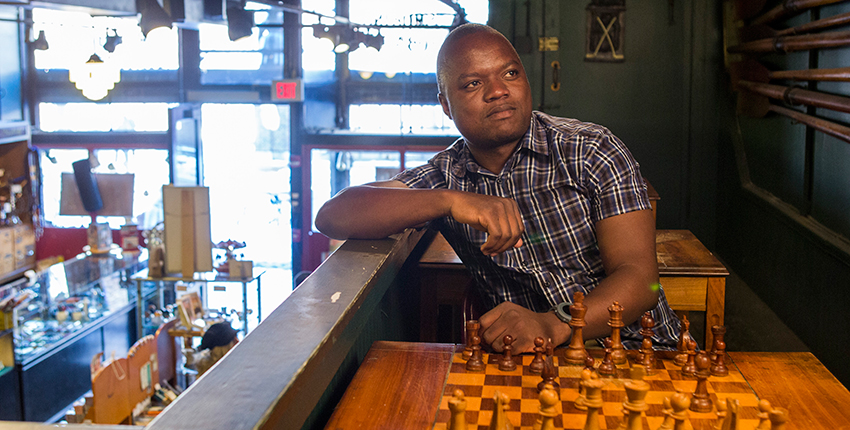 At first, Chenjezo Grant Gonani had a hard time believing that his friend was sick. He had just spoken with him, and everything had seemed fine. But when Gonani visited one night, the family had locked his friend in his room and wouldn’t let him out. They said he’d been running around, shouting, and smashing windows.

“To me it was shocking,” recalls Gonani, a second-year student in the HMS Master of Medical Sciences in Global Health Delivery (MMSc-GHD) program. “He’d be fine, then he’d be manic.”

Gonani, who was then working as a general practitioner for the Malawi Ministry of Health, recognized that his friend likely had bipolar disorder. In their search for treatment for the man, his family was consulting various traditional and faith healers, not the staff at a nearby district hospital.

Yet, as the disorder worsened, the family worried that they couldn’t keep him safe or protect others from his outbursts. They took him to the hospital where the staff, ill-prepared to deal with serious mental illness, put the man in chains and transferred him to the mental health hospital in the capital.

“We have to build services that will work within the complex cultural, social, and economic context of the community.” —Chenjezo Grant Gonani

In Malawi, a nation of 19 million in southeastern Africa, many people view mental illness as a spiritual issue, a malady not trusted to staff at district hospitals. According to Gonani, in Malawi 80 percent of patients with mental health illness are untreated and live with their families.

“We have to build services that will work within the complex cultural, social, and economic context of the community,” he says.

To contribute to this change, Gonani enrolled in a degree program in mental health care at Malawi’s St. John of God College of Health Sciences, and, following graduation, he established a mental health clinic in the district hospital in Neno and began traveling to the district’s other community health centers and making visits to patients’ homes.

He also attended the Harvard Global Health Delivery Intensive Program, a bootstrapping course for delivery science, where he learned how to train general practitioners and community health workers to identify people with mental health illnesses, refer them for treatment, and provide them with basic support services.

In the MMSc-GHD program at HMS, Gonani is gaining skills that he will take to Malawi to help achieve his goal of developing care networks for people with mental illnesses that involve families and traditional community leaders. While at HMS, he is working with Giuseppe Raviola, an HMS assistant professor of psychiatry and director of the department's Program in Global Mental Health and Social Change; and Byron Good, an HMS professor of medical anthropology in global health and social medicine.