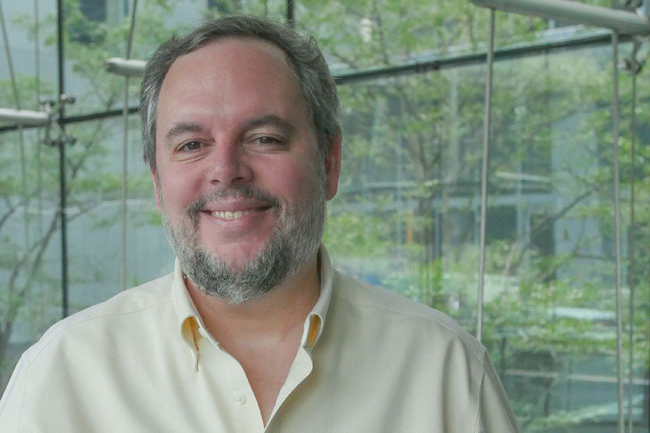 Harvard Medical School geneticist Stephen Elledge is the recipient of the 2017 Breakthrough Prize for unraveling the mechanism by which cells sense DNA damage and initiate self-repair. Image: Emmanuel Ording

Stephen Elledge, the Gregor Mendel Professor of Genetics and of Medicine at Brigham and Women’s Hospital and Harvard Medical School, has been named a 2017 recipient of the Breakthrough Prize, which recognizes paradigm-shifting discoveries in the life sciences, physics and mathematics.

Elledge is being honored for his wide-ranging contributions across multiple fields in biology. His work has elucidated critical mechanisms in cell division, cell aging, cancer growth, and protein breakdown and recycling.

The Breakthrough Prize—said to be the largest in the world for science—includes a $3 million award for each recipient and will be celebrated during a televised gala at the NASA Ames Research Center in Silicon Valley and broadcast live on the National Geographic channel on Sunday, Dec. 4, at 10 p.m. E.T.

“This magnificent award is a fitting recognition and acknowledgement of Stephen’s outstanding ingenuity, tenacity and vision,” said Elizabeth G. Nabel, president of Brigham and Women's Health Care. “We are extremely fortunate to count him among our colleagues here at Brigham and Women’s, and congratulate him and this year’s other prize winners on their remarkable achievements.”

One of Elledge’s most pivotal discoveries is unraveling the process by which cells sense DNA damage and initiate self-repair, a critical fail-safe mechanism that safeguards both individual cells and the integrity and health of the entire organism.

DNA, which forms the basis of life, fends off constant damage from various sources, including normal metabolic byproducts, environmental toxins, sunlight and normal aging. Such assaults can alter DNA’s chemical structure, leaving behind changes, or mutations, in the cell’s genetic code. If left unrepaired, these alterations can disrupt key biological processes, leading to serious diseases, including cancer.

A cell’s failure to sense the presence of aberrations in its DNA can spark cancerous mutations and malignant cell proliferation.

Elledge’s work revealed that a “watchdog” protein-enzyme pair sniff out damaged DNA and send a message to the cell’s internal repair machinery to fix the problem. If and when the cell fails to mend its broken DNA, it issues a command to self-destroy. This process, known as cell suicide, or apoptosis, is the body’s way of stemming the proliferation of abnormal cells and preventing cancer. Elledge’s discoveries explained how and why this mechanism sometimes fails.

Cancer development is an astoundingly complex process. It is the end result of a series of failures in the cell’s ability to detect, repair and halt DNA damage.

Unraveling the intricacies of cell behavior in response to DNA stress has been one of the most vexing challenges in genetics, oncology and, indeed, modern medicine. It is also one that holds great therapeutic hope for cancer. Elledge’s discoveries explain one of the key steps in this process, and in doing so it sheds light on one of the long-standing mysteries in cancer genomics: Why and how cells sometimes fail to sense the presence of DNA malfunction.

“Stephen's work toward elucidating the way cells sense DNA damage and initiate self-repair is breathtaking in its scope and elegance,” said Barbara McNeil, acting dean of the Harvard Medical School. “His passion for discovery, his curiosity and creativity embody the spirit of Harvard Medical School and the noblest traditions in scientific thought and inquiry. This award is a testament to that."

Elledge made his initial observations about DNA damage in yeast while working as a postdoctoral student at Stanford University in the late 1980s. He noticed that levels of a certain enzyme spiked when yeast DNA was damaged or failed to copy itself properly. Speculating that the same enzymatic “alert” mechanism may be at play in the cells of mammals and humans, Elledge relentlessly pursued that notion for the next 20 years.

Working with collaborators from several other institutions, Elledge went on to devise genetic models to test that concept in mammalian and human cells. He went on to describe, step by step, the signaling pathway that regulates the cell’s response to DNA damage stress and, ultimately, to identify the central characters that regulate this elaborate, yet elegant, protective mechanism.

Elledge’s scientific pursuits culminated in the discovery in the early 2000s of a pair of protein-kinase complexes that engage in an intricate interplay to detect DNA damage, notify one another of its presence and, ultimately, alert the cell’s “central command” to the presence of damaged DNA.

“Steve is not only a primary founder of the DNA damage surveillance and response field, he has been its intellectual leader. He has shown the courage to move where the science demands that he move,” said Gary Ruvkun, professor of genetics at Harvard Medical School and Massachusetts General Hospital, a winner of the Breakthrough Prize in Life Sciences in 2015, and a member of the current selection committee for the 2017 prize. “Further, he has consistently promoted novel genetic technologies that have had a profound impact on research by many labs, including his own.”

Elledge has applied basic principles of mathematics to design technologies that can analyze massive gene databases to help identify candidate genes that may play a role in cancer and autoimmune disorders.

More recently, harnessing the power of proteomics and computational analysis, Elledge and colleagues designed a new method to track the footprints of every single virus a person has been exposed to in a lifetime. That knowledge could help illuminate new understanding of the long-term consequences of past viral encounters and elucidate the role that viruses may play in the development of disorders ranging from cancer to autoimmune diseases to neurodegenerative conditions.

“I’m truly honored to receive the Breakthrough Prize,” Elledge said. “It is deeply gratifying to see the profound impact that basic research can have not only in promoting scientific knowledge but also in improving human health.”

Elledge plans to apply a significant portion of the funds he receives through the Breakthrough Prize toward philanthropic causes, which will include efforts to promote secondary and higher education with an emphasis on science.

Elledge is a Howard Hughes Medical Institute investigator and member of the Institute of Medicine and the National Academy of Sciences. He is the recipient of numerous awards, including the 2015 Albert Lasker Basic Medical Research Award, the National Academy of Sciences Award in Molecular Biology, the Genetics Society of America Medal, the Paul Marks Prize for Cancer Research and the Dickson Prize in Medicine, among others.

Now in its fifth year, the Breakthrough Prize was founded by Sergey Brin and Anne Wojcicki, Mark Zuckerberg and Priscilla Chan, and Yuri and Julia Milner. Winners are selected by a committee drawn from past Breakthrough Prize laureates.