How obesity contributes to pancreatic cancer and blocks treatment 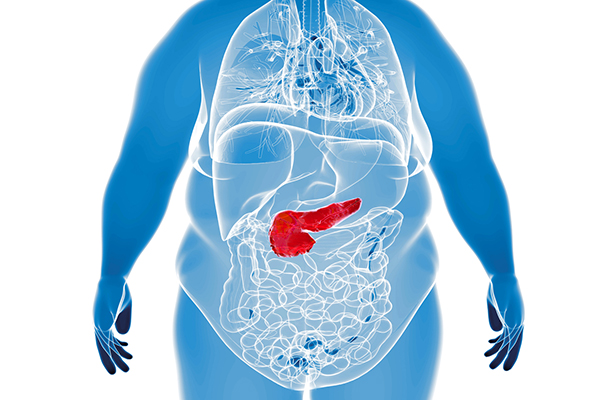 Harvard Medical School investigators at Massachusetts General Hospital have discovered the mechanism by which obesity increases inflammation and desmoplasia—an accumulation of connective tissue—in the most common form of pancreatic cancer.

In their report published online in Cancer Discovery, the researchers describe how interactions among fat cells, immune cells and connective tissue cells in obese patients stimulate a microenvironment that promotes tumor progression while blocking the response to chemotherapy. They also identify a treatment strategy that may inhibit the process.

“We evaluated the effects of obesity on numerous aspects of tumor growth, progression and treatment response in several animal models of pancreatic ductal adenocarcinoma and confirmed our findings in samples from cancer patients,” said study co-senior author Dai Fukumura, HMS associate professor of radiation oncology and a member of the Steele Laboratory of Tumor Biology at Mass General.

“Along with finding that tumors from obese mice or patients exhibited elevated levels of adipocytes or fat cells and of desmoplasia, both of which fuel tumor progression and interfere with treatment response, we also identified the underlying cause,” said Fukumura.

Pancreatic ductal adenocarcinoma, or PDAC, is the fourth leading cause of cancer death worldwide. More than half of patients diagnosed with PDAC are overweight or obese. Among patients with PDAC, obesity more than doubles the already high risk of death.

Previous research by the Mass General team and others has shown that PDAC is characterized by elevated desmoplasia, with an overproduction of extracellular matrix tissue by pancreatic stellate cells that both promotes the survival and migration of cancer cells and blocks the penetration of chemotherapy drugs into tumors.

Obesity itself is known to contribute to desmoplasia. The expansion of fat tissue leads to inflammation and fibrosis and an accumulation of fat within the normal pancreas, which also causes inflammation.

The team’s experiments revealed that the elevated desmoplasia in obese mouse models of PDAC was caused by activation of pancreatic stellate cells through the antiogensin II type-1 receptor (AT1) signaling pathway. This activation was promoted by production of interleukin-1 beta (IL-1ß) both by fat cells and by the immune cells called neutrophils within and around tumors.

Inhibiting AT1 signaling with losartan, which is used clinically to treat hypertension, reduced obesity-associated desmoplasia and tumor growth and increased the response to chemotherapy in the obese mouse model but not in normal-weight animals.

Analysis of tumors from human PDAC patients revealed increased desmoplasia and fat deposits only in samples from obese patients, and data from more than 300 patients showed that excess weight was associated with a reduction in patients’ response to chemotherapy.

Lead author João Incio of the Steele lab said, “Understanding the way that obesity affects pancreatic cancer may help us identify biomarkers—such as body weight and increased levels of tumor fibrosis—that could identify patients for whom AT1 blockers or IL-1ß antibodies would be most beneficial.”

“Since FDA-approved versions of both agents are readily available, this strategy could be readily translated into the clinic,” said Incio. “In addition, incorporating body weight into the design of preclinical studies could better account for the lack of response to conventional chemotherapeutical drugs.”

Co-senior author Rakesh Jain, the A. Werk Cook Professor of Radiation Oncology (Tumor Biology) at HMS and director of the Steele Laboratory, added, “With the majority of pancreatic cancer patients being overweight or obese at diagnosis, uncovering potential therapeutic targets within the mechanisms associating obesity with poor cancer prognoses is the first step towards developing remedies that could disrupt this association and significantly improve patient outcome. Targeting inflammation and fibrosis holds the promise to improve the clinical outcome of this major group of cancer patients.”

Mass General has filed a patent application based on this finding, which has been licensed to Xtuit Pharmaceuticals.

This work was supported by National Institutes of Health grants CA80124, CA85140, CA96915, CA115767 and CA126642, along with support from the Lustgarten Foundation and the Foundation for Science and Technology of Portugal.