On the Frontier of Genetic Technologies 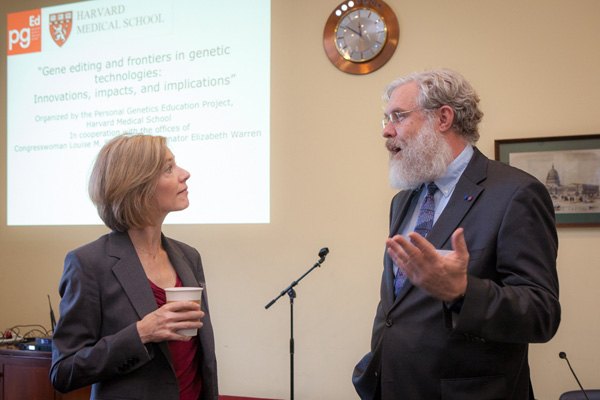 WASHINGTON, D.C.—Genetics is not your destiny, George Church told an overflow audience gathered in a Congressional briefing room. This was one of many head-turning statements he and two other speakers made about advances in the rapidly progressing field of genetic technologies.

“You can change it,” Church said about the genome. “Certainly you need to know it first.”

In a lightning-quick 10 minutes, Church, the Robert Winthrop Professor of Genetics at Harvard Medical School, explained how gene editing can potentially eliminate malaria and allow transplants of pig organs into humans, among other innovations.

Change was the theme of a briefing designed to shed light on the frontiers of genetic technologies. Church was joined by Diana Bianchi, the Natalie V. Zucker Professor at Tufts University School of Medicine, and Jennifer Doudna, professor of molecular and cell biology and of chemistry at the University of California, Berkeley.

“This is a technology that seemed at first like science fiction: a technology for rewriting DNA itself. We can sequence DNA, we can find mutations. What if we had a way to fix those mutations? That technology is not science fiction; it is a reality.”— Jennifer Doudna, University of California, Berkeley

The Nov. 17 briefing was presented by the Personal Genetics Education Project (pgEd), a multifaceted effort based in the Department of Genetics at HMS. The mission of pgED is to educate individuals about advances in the field through school programs, libraries, religious institutions and other public forums, and to accelerate public awareness of genetics issues by advising the entertainment industry. It also seeks to engage lawmakers—the “eyes and ears of the nation”—in discussions.

pgEd takes no position on policy, preferring to educate from a neutral position so that its audience can make better-informed decisions.

Each speaker was passionate about the need to inform and educate the public about genetics and the power of new technologies to affect health and disease.

Bianchi is a leading medical geneticist in the burgeoning field of prenatal diagnosis. Doudna and her colleague Emmanuelle Charpentier, now at the Max Planck Institute for Infection Biology, are credited with translating an ancient mechanism in bacterial immunity into a powerful tool for editing genomes. Church optimized the gene-editing technology, now known by the acronym CRISPR, by developing what are known as gene drives, that is, molecular tools that can “drive” a DNA sequence to be inherited by all of an organism’s offspring. 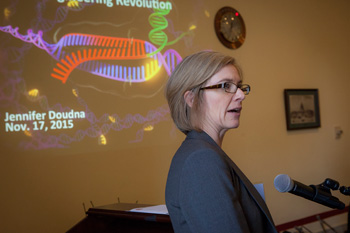 Doudna described the technology she and others have advanced as a genome-engineering revolution.

The possible therapeutic applications are promising, she said, but delivery into cells and tissues remains a challenge.

Doudna also pointed out the fundamental difference between gene editing that affects only one person versus gene editing in the germ line that is passed on to future generations.

“When do we apply that? And for what kind of afflictions?” she asked. “I’m very interested myself in trying to stimulate public conversation over the implications of this technology.”

Bianchi, who both sees patients and conducts research in medical genetics, is already using genomic sequencing in her practice. Non-invasive prenatal testing takes advantage of the fact that small amounts of DNA fragments from the placenta circulate within the blood of pregnant women. Cell-free fetal DNA can be analyzed to screen for extra or missing copies of chromosomes that might indicate Down syndrome or other inherited syndromes. 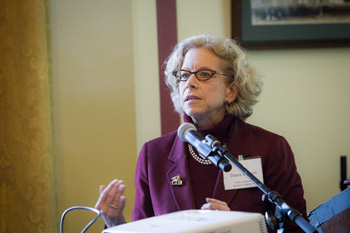 Since 2011, the DNA screening tests have been done on 2 million women. The DNA tests have both a high sensitivity and specificity and most important, Bianchi said, a higher positive predictive value than the current noninvasive screening tests that measure blood proteins and fetal ultrasound markers.

Bianchi’s lab is testing in mice whether administering therapy during pregnancy improves fetal brain development. Treatment in pregnant women could start as early as 12 weeks following a confirmed diagnosis of fetal Down syndrome and continue until delivery at 40 weeks.

If such a strategy works, it would give pregnant women three options to consider: continuing the pregnancy aware of a high risk for a genetic abnormality, terminating the pregnancy or treating the condition before birth.

Church explained how gene drives could make mosquitoes immune to malaria and therefore unable to transmit the disease to humans.

“That would have a huge impact. Like smallpox, once it’s gone, it’s gone,” he said.

Gene editing could also eliminate the viral components of the pig genome, thereby making organ transplants into humans more feasible. A recent paper showed that 62 genes could be altered at once, demonstrating the power of the technology.

While such projects are tantalizing, concern is also growing among scientists, bioethicists, policymakers and others over how gene-editing technologies, such as CRISPR, will be used, the speakers said, underscoring the importance of public discussion. 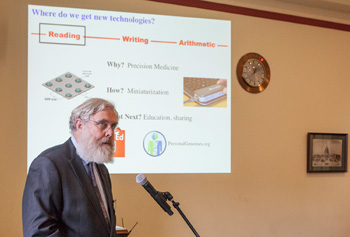 The briefing on Capitol Hill was sponsored by U.S. Rep. Louise Slaughter, D-N.Y., and Sen. Elizabeth Warren, D-Mass. More than 160 people, half of them Congressional staffers, heard where the science of genetic technologies is today, where it may be going and what concerns exist over its benefits and risks.

“It’s all about scalability,” said Ting Wu, HMS professor of genetics and pgEd’s director and co-founder. She hoped to send people out of the room astounded by the science and eager to spark discussion among policymakers, thus amplifying pgEd’s reach.

After the briefing, the speakers and the pgEd team met with the White House Office of Science and Technology, where they expressed hope that all segments of society could become part of the discussion.

“We think it is critical to engage across all communities, particularly the disenfranchised,” Marnie Gelbart, pgEd director of programs, said later. “This piece is as important as the technologies themselves, for safely and fairly integrating the technologies into society.”

The briefing was the fourth presented by pgEd. The first briefing highlighted the science of genomics, personalized medicine and genetic engineering, as well as ways to reach out to the public. The second focused on two topics: the role of genetics research in the unfolding Ebola outbreak in West Africa and the issues addressed by the Genetic Information Nondiscrimination Act, also known as GINA. The third centered on law enforcement and highlighted research on how microbial genomics is being used to improve health and increase public safety. For the fourth, pgEd wanted to bring attention to the excitement at the forefront of genetics and the questions being raised about how we as a society use these new technologies.

pgEd is supported by the HMS Department of Genetics and private funding from Sigma-Aldrich, Autodesk, Genentech, IDT (targeted specifically for GETed conferences and Map-Ed) and an anonymous donor.