At Dunham Lectures and Breaching the Borders symposium, researchers grappled with the complexity of the immune system 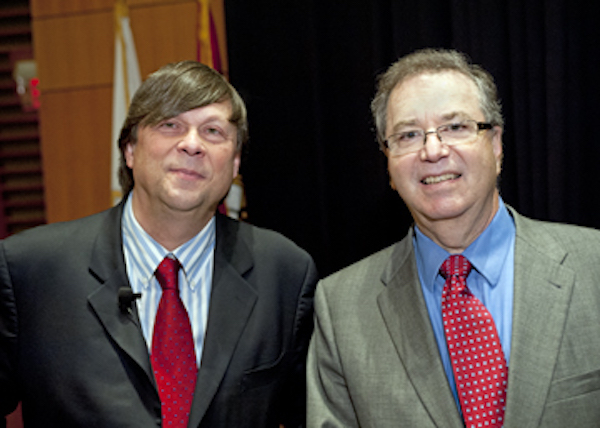 The deep complexities of the immune system offer compelling mysteries for researchers, but to date discoveries in basic immunology have yielded few improvements in human health. A new wave of scientists, including Mark Davis, a renowned Stanford University immunologist and the 2012 Dunham Lecturer, are searching not just for solutions to the scientific mysteries, but for a whole new way to understand immunity and to apply their findings to human health.

“Immunology has been a black box in medicine for so long that people assume that it’s just not understandable,” said Davis, the Burt and Marion Avery Family Professor of Immunology at the Stanford University School of Medicine and director of the Stanford Institute for Immunology, Transplantation and Infection. “You’re either drawn to these mysteries or you’re repelled by them.”

Davis, whois the 75th medical researcher to be honored with the prestigious Dunham lectureship, shared one of the secrets of his remarkable approach at the 2012 Dunham Lectures, delivered May 4 and 7 at Harvard Medical School. He calls it “ignorance driven science.”

Davis sees the “abysmally slow progress” from basic research to the clinic as a sign that researchers need to find new ways of dealing with the complexities of immune protection.

In his own attempts, Davis often plunges into the shadowy depths of the immune system without benefit of a hypothesis. Instead, he and his colleagues search widely, sometimes doing every assay they can think of, and waiting to see what the data reveal about their subject.

The immunologist’s lectures focused on two distinct areas of research—a broad-based effort to use “humans in the wild” as a model organism for understanding the immune system that he is leading through Stanford’s Human Immune Monitoring Center, and a continuation of his decades of work examining the fundamental operating dynamics of T-cells, immune cells which function as sentinels and switchboards that detect threats within the body and orchestrate responses to them.

This broad-spectrum, curiosity-driven approach is fruitful thanks to carefully constructed collaborations that enable diverse labs to share technology, clinical records, blood samples, and varying perspectives and techniques for doing science. It is also successful because of technological breakthroughs in the last decade, such as high-resolution single-molecule imaging, and high-speed, high fidelity sequencing that allows researchers to sort through massive numbers of variations in proteins and peptides.

Davis is known for his pioneering work developing these techniques, including a high throughput cellular array system, which can obtain information from a variety of types of blood cells simultaneously. 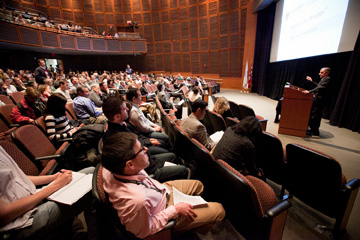 Davis's visit marked a return to HMS of the Dunham Lectureship after a brief hiatus.

How healthy is your immune system?

In the first of his two lectures, Davis focused on human immunity. He noted that it is crucial to understand the metrics of health in a functioning human immune system.

According to Davis, the immune system is important for health, but we have had no way of measuring how robust any given individual’s immune system is. For example, why do some people who receive flu vaccine remain healthy while others get the flu?

“Before you can understand disease you need to understand how the healthy organism works,” he said.

In one study, Davis’s team searched blood-bank blood for a complete panel of known antibodies. Hidden like needles in a haystack, they found anti-HIV memory cells in people who were HIV negative, and antibodies for bird flu in people who have never had the bird flu.

Previously it was thought that the body built these defense cells from scratch when a new danger was detected, but Davis’s team has shown that the body has a complete (though very thin) wall of defenses for every possible antigen.

These defense cells were extremely rare, but the fact that they exist, he said, suggests that evolution has favored prepositioned diversity, providing some measure of defense against every possible infectious agent.

In other work, Davis’s team is beginning to identify characteristics—at the biochemical level—that predict how effective a given individual’s immune system is at protecting against a virus like the flu.

“The immune system has a language—how it communicates with itself and orchestrates responses—and we’re just beginning to understand it,” Davis said. 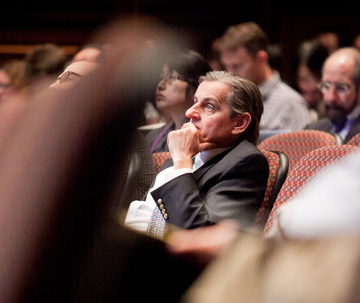 One important next step will be learning more about the shape and structure of the plasma membrane, the place where T-cells meet and attempt to identify potential pathogens. By labeling specific molecules and capturing images of their motion, Davis is beginning to see how T-cells enter into dialog with the body and the world of potential attackers within.

One thing researchers have seen is that T-cell receptors are sensitive enough to detect and respond to a single instance of an antigen peptide, the same way the retina can detect a single photon. Most intra-cellular communications­­­—say with hormones—require much heavier volume for successful signaling, Davis said, which suggests that the immune system is like a sixth sense, designed to probe the workings of the microscopic interior environment of the organism.

“You don’t see that kind of sensitivity outside of the sensory apparatus,” he said.

The structures that this work is revealing are important to many areas of biology outside of immunology, Davis said and are as surprisingly new as they are crucial to the function of life.

“One of the things I love about biology,” said Davis, “is that we know so little that if you go into a particular new situation with new tools and techniques, you always find something new and exciting.”

The discussion of groundbreaking techniques and exciting new cross-discipline collaborations in immunology continued May 8 at “Breaching the Borders,” an HMS Division of Immunology and Department of Microbiology and Immnuobiology-sponsored symposium. Talks highlighted efforts to understand immunology and its many related systems and processes as crucially interelated parts of the whole organism. 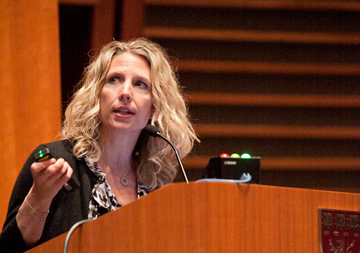 The panels focused on NeuroImmunology, ImmunoMetabolism, the Inflammation/Cancer Connection, and Systems Immunology. One consistent theme was the overarching complexity of these tightly interconnected systems. To deal with this complexity, speakers noted that researchers need to better understand the evolutionary and development history of the immune system, and noted that new tools from bioinformatics, physics and other disciplines are providing new ways to understand that complexity.

“It was inspiring to see the great number of people, especially non-immunologists, interested in hearing about how immunological processes are important in other realms, such as neurobiology and metabolism,” said Diane Mathis, Morton Grove-Rasmussen Professor of Immunohematology, and an organizer of the event.

Other participants noted that the symposium brought together diverse and often distinct communities.

“The neuroscience and immunology communities have largely existed in independent parallel universes at HMS.  This was a chance to come together to confront the growing realization that the biology is intimately intertwined,” said Clifford Woolf, HMS professor of neurology and neurobiology and director of the F.M. Kirby Center and Program in Neurobiology at Children’s Hospital Boston.

“Hopefully this will result in a major push to a more coherent and active neuroimmunology presence here, characterized by active collaboration and great science,” Woolf said.

“Immunology plays central roles in so many disease processes, it was great to hear about and discuss many examples,” said Steven Shoelson, HMS professor of medicine at Brigham and Women's Hospital and the Joslin Diabetes Center. “Cross fertilization between scientific disciplines promotes discovery.”