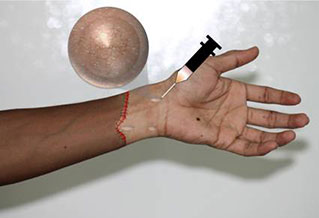 Following a tissue graft transplant—such as that of the face, hand, arm or leg—it is standard for doctors to immediately give transplant recipients immunosuppressant drugs to prevent their body’s immune system from rejecting and attacking the new body part. However, there are toxicities associated with delivering these drugs systemically, as well as side effects since suppressing the immune system can make a patient vulnerable to infection.

A global collaboration including researchers from Brigham and Women’s Hospital (BWH); Institute for Stem Cell Biology and Regenerative Medicine in Bangalore, India; and University Hospital of Bern, Switzerland, have developed a way to deliver immunosupressant drugs locally and when prompted, with the use of a biomaterial that self-assembles into a hydrogel (jello-like) material. The novel system is able to deliver targeted, controlled release of medication where and when it is needed.

The study is published online August 13, 2014 in Science Translational Medicine.

“This new approach to delivering immunosuppressant therapy suggests that local delivery of the drug to the grafted tissue has benefits in reducing toxicity, as well as markedly improving therapeutic outcomes, and may lead to a paradigm shift in clinical immunosuppressive therapy in transplant surgery,” said Jeff Karp, HMS associate professor of medicine at BWH, and co-corresponding study author.

According to Robert Rieben, associate professor of Transplantation Immunology, Department of Clinical Research, University of Bern, co-corresponding study author: “Continuous release of the drugs irrespective of disease severity is a hallmark of existing drug delivery vehicles and could be a thing of the past. Inflammation-directed drug release offers ‘judicious use of locally injected drug’ that extends the release for months while eliminating systemic toxicity. ”

In pre-clinical studies conducted by the researchers, a one-time, local injection of the hydrogel-drug combo prevented graft rejection for more than 100 days compared to 35.5 days for recipients receiving only tacrolimus and 11 days for recipients without treatment or only receiving hydrogel.

The innovation may also be applied in medical situations outside of transplant surgery.

“This safe, controlled release platform approach functions for over three months from a single injection, and that has broad implications,” said Karp. “Nearly every disease has an inflammatory component. Thus we believe the materials we have developed could be used for localized treatment of multiple inflammatory diseases.”

According to Praveen Kumar Vemula, co-corresponding study author, “This approach should also improve patient compliance, as it obviates the need for daily medications. Also, we plan to expand this prototype for the treatment of numerous diseases such as psoriasis, arthritis and cancer.” Vemula, now affiliated with the Institute for Stem Cell Biology and Regenerative Medicine in Bangalore, India, developed the hydrogel with Karp while a postdoc in the Karp laboratory.

This research was supported by the National Institutes of Health (DE023432), American Society for Surgery of the Hand, Olga Mayenfisch Foundation, Julia Bangerter-Rhyner Foundation, and Harvard Institute of Translational Immunology/Helmsley Trust Pilot Grant.

Jeff Karp is a founder of, and has a financial interest in Skintifique, a company that is developing self-assembled hydrogels for skin applications. The Karp lab developed the hydrogel technology and it was licensed by BWH to Skintifique.