An Easier Pill to Swallow

Oral capsule is as effective as invasive methods for fecal transplant

A noninvasive method of delivering a promising therapy for persistent Clostridium difficile infection appears to be as effective as treatment via colonoscopy or through a nasogastric tube.  In their JAMA paper, Harvard Medical School investigators from Massachusetts General Hospital report that oral administration of the therapy called fecal microbiota transplant (FMT) in acid-resistant capsules was as successful as more-invasive methods in eliminating recurrent diarrhea caused by C. difficile. 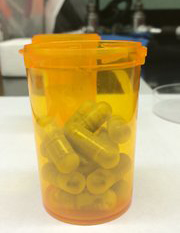 “Numerous reports have shown that FMT is effective in treating active C. difficile infection and preventing recurrences in patients whose infections failed to respond to standard treatments,” said Ilan Youngster, HMS clinical fellow in pediatrics at Mass General and at Boston Children’s Hospital, who is corresponding author of the JAMA report. “The procedures that have been used before—colonoscopies, nasogastric tubes, even enemas—all have potential risks and discomforts for patients. The use of capsules simplifies the procedure immensely, potentially making it accessible to a greater population.”

Certain strains of C. difficile, which currently causes about 250,000 hospitalizations and 14,000 deaths each year in the U.S., have become highly resistant to treatment, leading to a 30 percent treatment failure rate in patients infected with those strains. Because antibiotic therapy also kills off the normal population of beneficial intestinal microbes that can keep pathologic species in check, antibiotic therapy could actually make the situation worse. FMT is believed to restore the normal balance of beneficial microbes, and studies in animals and humans using fresh fecal material—usually delivered by colonoscopy—have had success rates around 90 percent.

Earlier this year the same research team showed that delivering frozen fecal material for FMT either by colonoscopy or nasogastric tube was equally effective. Using frozen material offers the potential of maintaining a bank of frozen samples from donors prescreened for any health issues, reducing the risk of transmitting new infections and the need to recruit and screen donors for each patient. The current study was designed to investigate whether delivering FMT orally through capsules designed to open upon reaching the small intestine would be just as effective.

Conducted at Mass General, the study enrolled 20 people aged 11 to 84 with persistent or recurrent C. difficile infection. Stool samples were gathered from healthy adult volunteers who had been comprehensively screened for infectious diseases and avoided eating common allergens for several days before donating. The samples were filtered, diluted, screened, placed into capsules and frozen for four weeks to enable retesting of donors for important viral infections. On two consecutive days each participant received 15 FMT capsules, which most of them ingested within a few minutes. If their symptoms did not improve within 72 hours, they were offered a second course of treatment with material from the same donor.

Of the 20 study participants, 14 had complete symptom resolution after a single treatment and no recurrence during the next eight weeks. The other six received a second treatment about a week after the first, and in five of them, symptoms resolved. In addition to the single patient whose symptoms didn’t respond to two courses of treatment, one of the participants whose infection responded to the second course had a recurrence within the eight-week follow-up period, resulting in an overall success rate of 90 percent for the study group. Participants who needed a second treatment were generally in poorer health—including more serious C. difficile-associated symptoms—than were those whose symptoms resolved after a single two-day treatment.

“This small investigation was designed to be a pilot study and provides preliminary data supporting the safety and effectiveness of this approach,” said Elizabeth Hohmann, HMS associate professor of medicine at Mass General and senior author of the article. “More experience and larger studies are needed to determine the long-term safety and efficacy, and further investigation should help determine the most effective microbial mixes for either oral or procedural administration.”

Youngster added, “While we are striving to make this treatment more accessible to patients, it’s important to remind people of the potential dangers of attempting ‘home brew’ FMT using fecal material from family members or friends. Many people can be carriers of bacteria, viruses and parasites that are shed in their stools but have no symptoms. It’s not enough to know your donor and just ask how he or she feels, as some websites suggest. In any form, this procedure should be performed only under strict medical supervision with material from thoroughly screened donors.”