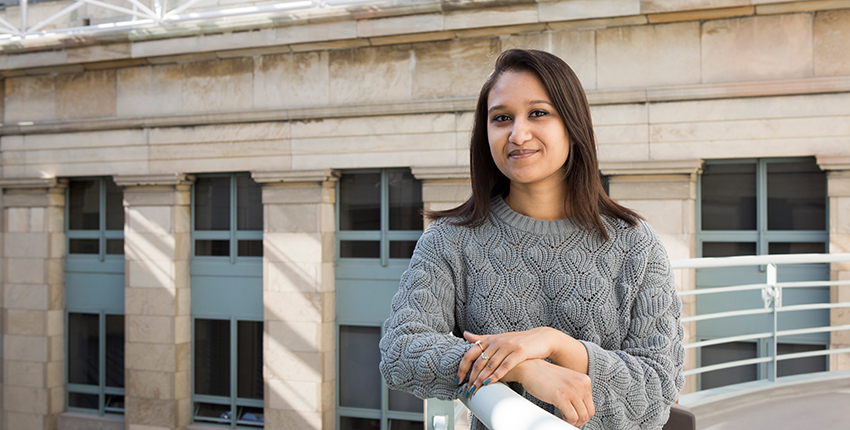 Like so many newcomers to the U.S., Rumana Rashid grew up living in two cultures. By day, she attended public school, spoke English, ate pizza with her friends and dressed in T-shirts and jeans. By night with her family, she spoke Bengali, ate curry or biryani for dinner, and wore saris.

Born in Bangladesh, Rashid moved to Virginia with her parents when she was 6 years old.

“That’s been a theme in my life, of integrating two different cultures—and it has spilled over into my academic choices as well,” said Rashid.

Rashid is a student in the Harvard Medical School Master of Biomedical Informatics (MBI) program, where she said she is uniting her study of computer science and mathematics with an education in biology and medicine.

“I’m really excited for all of the ways that we can apply informatics to advance the field of medicine.” —Rumana Rashid

As an undergraduate, she combined biomedicine and engineering. In the future, Rashid said she hopes to pursue a combined MD/PhD program, with a career goal to apply bioinformatics to advance the field of medicine, particularly the diagnosis and treatment of cancer in children.

“I’m really excited for all of the ways that we can apply informatics to advance the field of medicine,” Rashid said.

Two experiences in her youth drew her to pediatrics. When she was just 5 years old and still in Bangladesh, Rashid said her best friend died during open-heart surgery. At the University of Virginia, a student she knew in her dorm died.

“I’ve seen just how tragic and unfair it is when there’s early loss of life,” Rashid said.

Those deaths, however, drove Rashid’s interest and curiosity in health. She wondered, “Why do some people experience an illness and some don't? Why do some people get better or overcome illnesses while others don’t?”

Rashid believes some of the answers may be provided through biomedical informatics, where there is “so much opportunity for informatics to help medical decision making.”

Rashid said she has learned much in the MBI program over the past two years, where she has explored many of the different types of informatics related to medicine—from clinical informatics to genetics to data visualization and other disciplines.

“It’s been really amazing to learn from the best in the world—people who are not only experts in the field but who have created the field, like Zak Kohane,” said Rashid. “I’m just really thankful for all the wonderful mentorship that I have received in the program and in Boston,” she added.

Rashid said she wants to return the favor one day by mentoring others—and she especially hopes that her involvement in informatics and medicine may inspire other Bengali and Muslim women to pursue such fields.

In the MBI program

Rashid’s capstone project under the mentorship of Adam Wright, HMS associate professor of medicine at Brigham and Women’s Hospital, focused on finding anomalies such as malfunctions or unusual patterns, in electronic health record alerts.

Spikes, drops or outliers in data can give researchers clues to patterns that could support better decision making in medicine, said Rashid. For example, she said, if there are decreases in cancer screening alerts, systems can be fixed to provide timely reminders for physicians and thus improve patient care. Or if the data show spikes in heart attacks during the summer, physicians can urge patients to take preventative measures during those months.

Using computational clustering methods as a novel way to detect anomalies has provided good science training, she said. “The biggest thing I learned from that project is that the method of anomaly detection is useful to many different fields.”

A strength of the HMS MBI program, Rashid said, is the makeup of the student body. She said half the students are like her, students who enrolled in the MBI program after getting their bachelor’s degrees. The other half are medical fellows from various specialties, such as pediatrics, anesthesiology and surgery.

“It’s a neat opportunity to be in class with physicians every day and hear their clinical perspectives and experiences,” Rashid said.

In addition to different academic and clinical backgrounds, Rashid said her classmates also hail from all over the world. She said the different experiences and world views that international students share can help all students learn from one another and bring valuable perspectives to medicine.

Rashid has been working full-time while pursuing her master’s degree. She came to Boston three years ago to work as a research assistant in the lab of Sandro Santagata, HMS associate professor of pathology at Brigham and Women’s Hospital. She said the projects have been the most meaningful in her career.

She described one project that got her involved in the first clinical application of CyCIF (cyclic immunofluorescence), a technology developed by Peter Sorger, the Otto Krayer Professor of Systems Pharmacology in the Blavatnik Institute at HMS and head of the Program in Therapeutic Science, and colleagues at the HMS Laboratory of Systems Pharmacology.

“Our findings from CyCIF built the rationale for testing a novel therapeutic in a patient with craniopharyngioma, a pediatric brain tumor, ” said Rashid.

Rashid is graduating from the MBI program this month and is looking forward to the next stage of her career in biomedicine, where she will continue to embrace her dual nature.