Dopamine in the Driver’s Seat 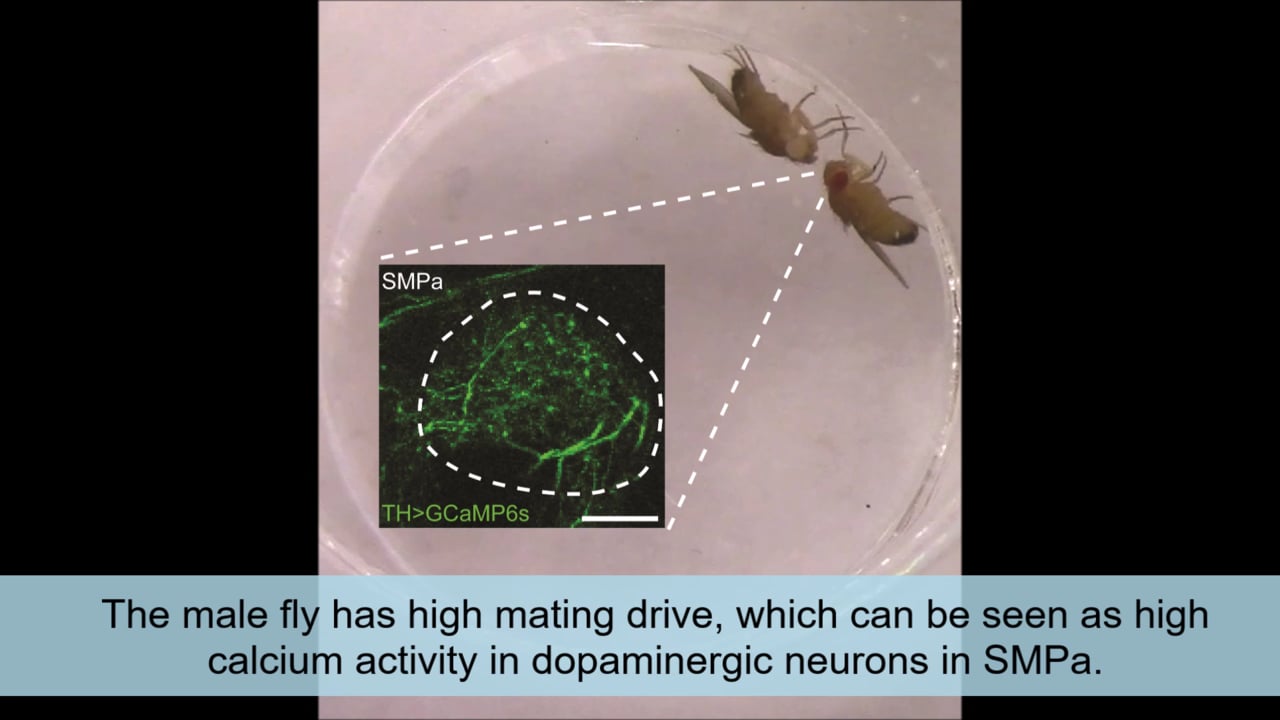 Male fruit flies have a mating drive, and its rise and fall is controlled by dopamine levels in one area of the brain, a team of Harvard Medical School neurobiologists has found.

The discovery provides insight into the nature of motivation across species, the researchers said.

“None of us is really interested in flies or their sexual behavior,” said Dragana Rogulja, assistant professor of neurobiology at Harvard Medical School and co-senior author of the study. “We’re trying to understand how animals make and carry out decisions to perform or not perform a behavior.”

Reported June 9 in Neuron, the findings reveal more about how a change in an animal’s internal state can push it to stop doing something it was previously motivated to do, like how a person tends to stop eating when their brain indicates their stomach is full even if appetizing food remains on the table.

“Our brains are constantly being pulled in many different directions,” said Michael Crickmore, HMS assistant professor of neurology in the F.M. Kirby Neurobiology Center at Boston Children’s Hospital and co-senior author of the study. “Of all the things you could possibly be doing, how do you select the one behavior that’s most urgent and appropriate for the conditions inside you and in the external world?

“Earlier in my career, it seemed like wishful thinking that we would get to a real mechanistic understanding of how this works,” Crickmore said. “Yet already we see the clouds starting to dissipate. We’re finding some fundamental principles of brain circuitry that we believe are likely to be broadly conserved. For me, that’s really exciting.”

Too much of a good thing

What changed? Experiments indicated the flies weren’t getting tired, nor were they looking for a new set of females.

Zhang found that the reproductive fluid in the flies’ ejaculatory bulbs—“the part evolution cares about”—got depleted with each copulation. But removing male flies’ reproductive organs didn’t affect their mating drive at all.

Zhang then let one group of males mate normally but stopped a second group mid-coitus, before they transferred reproductive fluid to the females. Even though the second group’s ejaculatory bulbs remained full, both groups experienced a drop in mating drive.

“That told us there is some signal sent at the start of mating that instructs the brain to downregulate mating drive and that may serve as a proxy for the amount of fluid left,” said Rogulja.

After doing thousands of tests, the team found that this downregulation was caused by changes in the activity of specific dopamine-producing neurons.

Fruit flies were an attractive model system because their tiny brains have only about 135,000 neurons, compared to the human brain’s 85 billion. The researchers chose to study mating drive in part because it’s a sexually dimorphic behavior in flies, which meant the team could narrow its search to the 3,000 neurons that differ between males and females.

Of those, Zhang was able to pinpoint just a few dopamine-producing neurons whose activity corresponded to the flies’ mating drive. The team could accurately predict how many times a fly had mated based on how busy or lackluster those neurons were.

“You could see what stage of satiety the fly was in,” said Rogulja.

The researchers found that dopamine was acting on P1 neurons, which are where the sights, sounds, smells and tastes of a female fly converge. Activation of P1 neurons was known to trigger courtship behavior.

The team saw that if a male fly released a lot of dopamine onto P1, it decided to court, but if dopamine output onto P1 was low, no sensory inputs from female flies could pique its interest.

“We think we’re getting a glimpse of a general way to dial down motivations,” said Crickmore. “If you’re trying to make a male not court a female, you could block the ability to receive sensory signals from the female, but then the male might not be able to tell there is another fly there at all or might confuse it for a male. You could block motor functions to prevent courtship, but then the male might have problems performing other behaviors.”

Rogulja added, “You’d rather change the way all that information gets transformed into purposeful motor output. That way you can have parallel processes in the brain for different behaviors.”

The researchers emphasize that they were able to quickly translate their findings into a theory of how motivation works at a neurological level because so much was already known about dopamine’s effects on behavior and what goes on in P1.

“It’s not just that Stephen has mapped out a diagram showing that dopaminergic neurons talk directly to courtship command neurons,” said Rogulja. “What’s important is that we’re uncovering a principle that is likely to be conserved and that helps us understand how behaviors are motivated.”

This study was supported by the New York Stem Cell Foundation (NYSCF). Rogulja is an NYSCF – Robertson Neuroscience Investigator.