The Doctor Is Out

Faculty member discusses work as a gay physician at Harvard 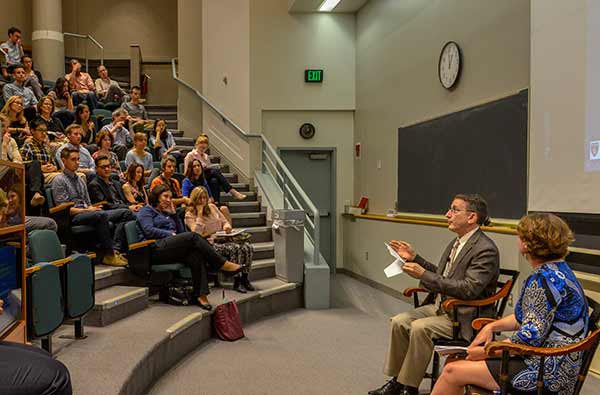 Back in the 1980s, when Mark Schuster was completing an adult neurology rotation at a Harvard teaching hospital, a woman was brought to the emergency room with urinary incontinence and other symptoms, and signs of a herniated disc, which had been confirmed by myelogram.

She required surgery, making her what the neurology team called a great teaching case, but what Schuster learned went well beyond the patient’s medical condition.

“So, she’s a lesbian, what does it matter?” Schuster exclaimed, startling himself by his abrupt and indignant response, in what he recalled as a sort of out-of-body experience.

The neurosurgeon made it clear that he would not operate on a lesbian.  And he didn’t.

Eventually, the neurology team arranged for an orthopedic surgeon to perform the operation.

Now the HMS William Berenberg Professor of Pediatrics at Boston Children’s Hospital, Schuster was this year’s guest speaker at HMS’ second Diversity Dialogue lecture on Sept. 29, “The Doctor Is Out: A conversation with Dr. Mark Schuster on being a gay physician at Harvard.”

Attended by over 200 faculty, staff and students from the Longwood Medical Area, the event in the Carl W. Walter Amphitheater allowed attendees to engage in a discussion with Schuster about what it means today to be a LGBT physician.

Schuster, who is also chief of the Division of General Pediatrics and vice chair for health policy in the Department of Medicine at Boston Children’s Hospital, used the anecdote from his neurology rotation to illustrate one of the many instances in his career where he observed LGBT bias in the medical field.

“It was just a speech at Children’s. It wasn’t meant to lead me to speak here today.” -Mark Schuster

Schuster, HMS ’87, communicated some of his experiences being a gay physician in a speech he delivered at the Gay Lesbian Bisexual Transgender & Friends Celebration at Boston Children’s in June 2010.

For many, however, it was far more than a speech. After being published in the journal Academic Pediatrics in 2012, the speech was reproduced by WBUR and covered by the New York Times. Today, Schuster’s talk is being used as a teaching tool in medical schools across the country.

“I was just telling my story,” said Schuster. “It was just a speech at Children’s. It wasn’t meant to lead me to speak here today.”

Audience questions ranged from how to find an LGBT mentor in the medical field to how to combat instances of conscious and unconscious bias in the classroom or at clinical sites. 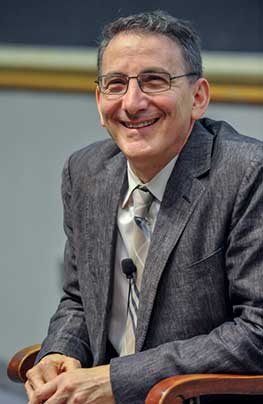 “It’s important to speak up when you can,” he said, recognizing that it is often difficult to do so based on the power dynamics between students and their teachers or clinical supervisors.

Schuster emphasized, however, that there are far more resources available to students and faculty today to confront these issues.

“There are people to go to. Now, folks can come to the LGBT office,” Schuster said, encouraging students to visit the HMS and Harvard School of Dental Medicine LGBT Office, a division of the Office for Diversity Inclusion & Community Partnership.

“It is no small thing that is happening here today,” added event moderator and program manager at the LGBT office, Jessica Halem, noting the significance of an open forum discussion on LGBT affairs in medicine.

“This is hugely auspicious,” she said.

One student asked Schuster’s opinion on what advances may be on the horizon for other minority groups in medicine. “I hope there will be changes, not just for LGBT people, but for people of color and for women,” Schuster said, adding, “Change is slow, but there are new generations coming.”

One of the final audience questions prompted Schuster to reflect on how the viral response to his 2010 speech made such an impact, and about how his continued commitment to LGBT rights in the medical field has affected his own life and career.

“I feel appreciative. It was an accidental gift. When I retire, this will probably be the most impactful thing I’ve done,” he said.

Schuster was a principal member of the team that drafted the RAND report for the Clinton administration that showed that openly gay men and lesbians could be successfully integrated into the military.

He is an elected member of the National Academy of Medicine (formerly the Institute of Medicine) and recently served on its Committee on Lesbian, Gay, Bisexual and Transgender Health Issues and Research Gaps and Opportunities.

Now, Schuster works to advocate for the LGBT community at HMS and its affiliates, including giving talks such as the one delivered for the Diversity Dialogue series.

For more information on resources available for LGBT individuals on the Harvard Longwood Campus, click here.