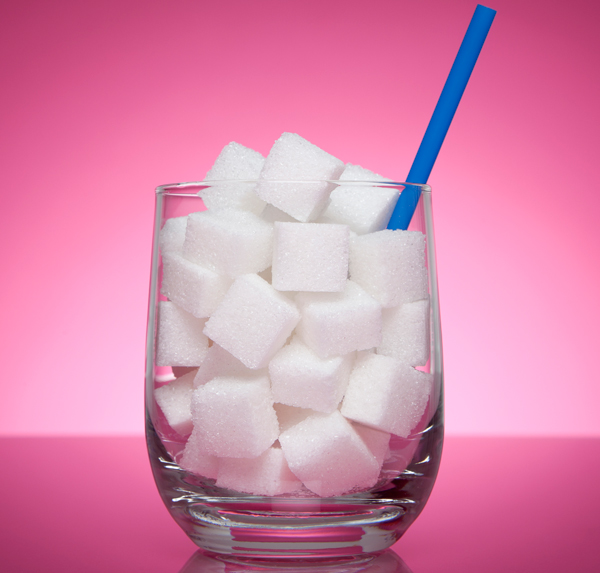 If you’re one of the 2 billion people in the world who are overweight or obese, or the 1 billion people with fatty liver disease, your doctor’s first advice is to cut calories—especially cutting down on concentrated sugars such as high-fructose corn syrup, a sugar found in sweetened beverages and many other processed foods.

Harvard Medical School researchers at Joslin Diabetes Center have found that mice on a fatty diet who were given high levels of fructose in their diet suffered much worse metabolic effects than those given similar amounts of calories as glucose (another component of table sugar). The scientists went on to pinpoint biological processes that help explain the different outcomes.

Although fatty liver disease usually does not progress to dangerous levels of liver inflammation, the condition is an increasing concern as its rates climb in the worldwide obesity epidemic, said Samir Softic, first author on a paper in the Journal of Clinical Investigation describing the research.

Additionally, the condition has become a particular concern in children, said Softic, who is also an HMS instructor in pediatrics at Boston Children’s Hospital and a researcher in the lab of C. Ronald Kahn.

Researchers experimented in a mouse model used to study obesity, type 2 diabetes, fatty liver and other metabolic illnesses. These animals were given either regular or high-fat diets and drank either plain water or water sweetened with fructose or glucose.

Comparing these six diets, “gave us a much more precise way of saying what is the role of fructose versus glucose in the diet, and how bad is it when it's added to a normal diet versus a diet high in fat,” said Kahn.

Over 10 weeks, none of the animals on a regular diet developed insulin resistance, a key factor in metabolic disease, although those consuming either form of sugar gained substantially more weight.

Among animals on the high-fat diet, however, significant differences emerged between the fructose and the glucose groups.

Mice on the high-fat diet became much more obese and more insulin-resistant compared to their peers on the glucose diet. And while both groups of animals added fat to their livers, the fat composition was quite different.

The researchers also discovered that production of an enzyme called Khk (ketohexokinase), required for the first step of fructose metabolism, was increased in the livers of mice that drank fructose. When the scientists examined liver samples from obese human teenagers with fatty liver disease, they also found higher levels of Khk.

The Khk enzyme is specifically important in fructose, but not glucose, metabolism. “Although fructose and glucose are both sugars, cells handle them very differently,” said Kahn.

The scientists saw that this might offer a target to clamp down on fructose metabolism.

To follow up on this possibility, the team collaborated with researchers at Alnylam Pharmaceuticals in Cambridge, Mass., to tamp down on production of the Khk protein in the liver. The treatment lowered liver weight and improved glucose tolerance among mice on any diet, but most strikingly among those on the high-fat/high-fructose diet.

Looking ahead, the researchers will continue to explore the Khk biological pathway and to look for other promising molecular targets for treating fatty liver disease.

“This disease is almost always associated with obesity,” noted Kahn. “Once your fat cells get really full of fat, and they can’t hold any more, fat winds up going in other tissues, and the liver is the next best place.”

Almost all obese people with diabetes add some fat to their livers.

As obesity spreads worldwide, so will the burden of fatty liver disease and associated liver failure, which is predicted to become the most common factor driving the need for liver transplants, he said.

The disease afflicts people of every age, but has become a particular problem in children, now that about one-fifth of U.S. school-age children are obese, according to the Centers for Disease Control and Prevention.

“The disease is much more worrisome in a child of 13 who goes from normal liver to fatty liver to liver inflammation over the span of several years than in somebody who's been overweight for 30 years,” says Softic. “Kids also eat more sugar than adults, so fructose may be even more of a risk factor in children, which would add to their years of poor health.”