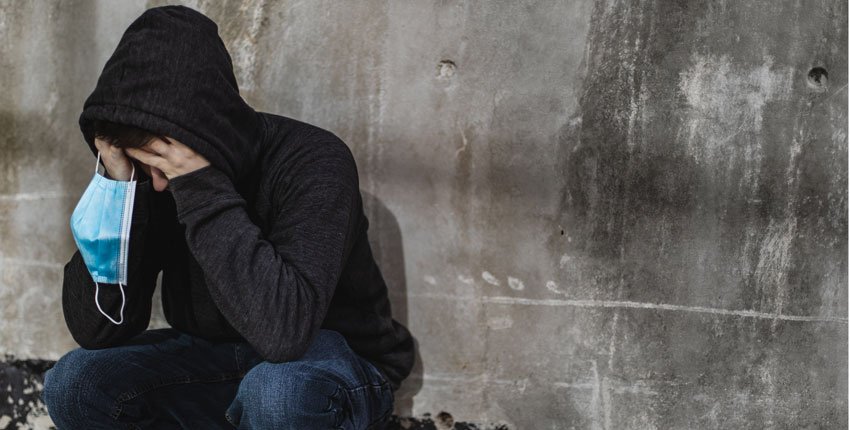 A general bias toward negativity—or the tendency to focus on negative rather than positive information—may exacerbate the spread of misinformation, and because depression may contribute to such negativity bias, a team of Harvard Medical School investigators at Massachusetts General Hospital has examined whether people who experience depressive symptoms may be more receptive than others to misinformation related to COVID-19 vaccines.

Their findings are published in JAMA Network Open.

“One of the notable things about depression is that it can cause people to see the world differently—sort of the opposite of rose-colored glasses. That is, for some depressed people, the world appears as a particularly dark and dangerous place,” said lead author Roy H. Perlis, HMS professor of psychiatry and associate chief of research in the Department of Psychiatry and director of the Center for Quantitative Health at Mass General.

“We wondered whether people seeing the world this way might also be more susceptible to believing misinformation about vaccines. If you already think the world is a dangerous place, you might be more inclined to believe that vaccines are dangerous—even though they are not,” Perlis said.

To investigate, Perlis and colleagues examined responses from 15,464 adults from all 50 U.S. states and Washington, D.C., who completed an internet survey between May and July 2021 that included statements related to COVID-19 vaccines, after they had answered a questionnaire that measured depressive symptoms.

The team found that levels of depression are at least three times higher than what they were before the COVID-19 pandemic.

Participants with moderate or greater major depressive symptoms on the initial questionnaire were more likely to endorse at least one of four false statements about COVID-19 vaccines on the subsequent survey, and those who endorsed these statements were less likely to be vaccinated.

Specifically, the presence of depression was associated with increased likelihood of endorsing misinformation, and respondents endorsing at least one statement of misinformation significantly less likely to be vaccinated and more likely to report vaccine resistance.

Perlis and his colleagues also analyzed data from the subset of 2,809 respondents who answered a subsequent survey two months later. Those with depression in the first survey were twice as likely as those without depression to endorse more misinformation than they did in the prior survey.

“While we can’t conclude that depression caused this susceptibility, looking at a second wave of data at least told us that the depression came before the misinformation. That is, it wasn’t that misinformation was making people more depressed,” Perlis noted.

Because the study also included questions about social media and news sources, the investigators were also able to exclude the possibility that the effect of depression was a result of getting news from different places.

They also found that the effect was not limited to people with particular political beliefs or members of particular demographic groups.

The researchers noted that the findings provide an additional motivation to ensure that people have access to treatment for depression and anxiety.

“Our result suggests that, by addressing the extremely high levels of depression in this country during COVID, we might decrease people’s susceptibility to misinformation,” said Perlis. “Of course, we can only show an association—we can’t show that the depression causes the susceptibility, but it’s certainly suggestive that it might.”

Perlis stressed that the results in no way blame misinformation on people with depression but rather suggest that depression may cause people to be more vulnerable to believing misinformation.

The study was supported by the National Science Foundation, the National Institute of Mental Health, Northeastern University, Harvard Kennedy School of Government, and Rutgers University.