The Debts We Owe

HMS graduate Rob Weatherford on the sustaining power of patients, family and friends 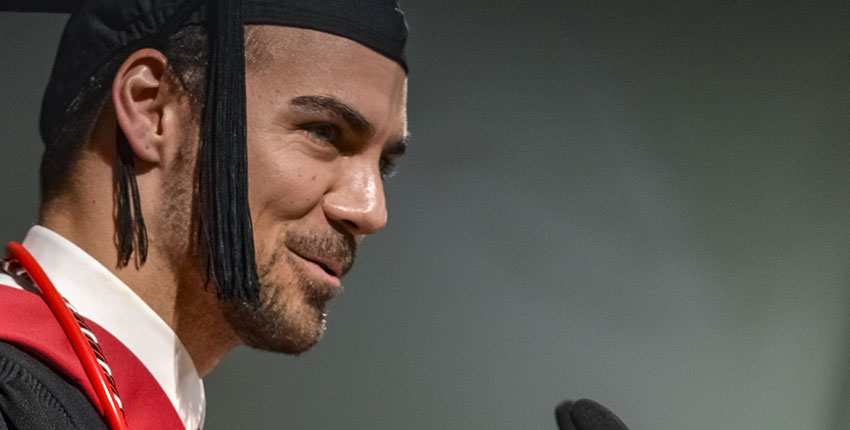 Friends and family, thank you for being here to celebrate with us today.

It is an honor to address both the people whose goodness has sustained me over the past four years as well as those who have sustained them.

Today marks a momentous occasion, both for the newly minted doctors and society at large, for as of today, we are legally required to identify ourselves as doctors on airplanes when an emergency arises, which is why I recommend all our farther-flung guests take out your smartphones and immediately cancel your flights home while you can still recover travel points with your airline and get a rental car instead.

Today, a swarm of enthusiastic, half-baked competence is unleashed upon the world—thank goodness for mandated residency training.

The debt we graduates owe today is at least two-part, three if you include the millions of dollars owed to Uncle Sam that might have been better spent investing in Twitter, the unexpected new platform for declaring domestic and international policy these past few years, or, I don’t know, purchasing a small country.

Our first debt we owe to our patients, who have earned their name through the homophonic patience they showed us as we learned the art of medicine through their lives and conditions. We obediently inquired of them all—even those simply complaining of a headache or a broken bone—if they had sex with men, women or both, and sometimes subjected them to multiple prostate exams because we just weren’t sure what we were feeling up there.

I will never forget two patients I want to mention today, one a proud Venezolano who fell ill with pneumonia while visiting his recently immigrated family in the U.S. His symptoms were manifestations of an as-yet undiagnosed metastatic cancer that left him so debilitated that he couldn’t return to Venezuela to spend his final days on the beaches there, his dying wish. We instead arranged for hospice at a house on Cape Cod, and he passed away with his family, not at home, but nevertheless hearing the waves of the same Atlantic Ocean he loved. I wept for him and his family at his memorial service on the Cape.

Another patient who stays in my mind is a woman who, after adopting five children with her husband due to their infertility, surprised herself and her husband by becoming pregnant many years into their marriage. I grew close to her and her husband through the lengthy labor and got to be the insecure but thrilled person who delivered that gift of a child into the world.

Whether witnessing our patients’ deaths or their births, we students have all wept for and silently celebrated with our patients more than we ever allowed ourselves to show. To our patients, on this day we are humbly grateful.

Our second debt is to our loved ones—parents, siblings, spouses and partners, friends of all stripes—who have buoyed us up over our entire lifetime, and especially during the sometimes turbulent waters of medical school. Among just my friends, we have in our audience today a father who raised his two sons, both of whom are doctors as of today, after losing his wife to complications of a longstanding illness. We are privileged to have a single mother who worked as a cashier in Ohio to support her son, who as of today is a proud Harvard-educated doctor. The sacrifices represented under this tent today are countless and untold.

My gratitude extends deepest to my own parents. Just two weeks ago, my mother earned her PhD at age 58, a feat she undertook after raising seven children. She is the reason I know that the future is female, and she was the original impetus for why I proudly chose obstetrics and gynecology as my medical field so that I may do my part to help to usher that future in. My father, the most intentional and values-driven man I know, the man whose unending faith in and love for me is a testament to the fact that love is the strongest force on earth. Both of my parents chose to love the son they were sent even if he differed from the son they expected. I love you both beyond my ability to say.

Isaac Newton wrote in 1675 that “if I have seen further, it is because I have stood on the shoulders of giants.” Though he was alluding to his scientific accomplishments, his metaphor applies to us today, and our parents and guardians are those giants. We were cradled at your bosom. We learned to walk in the guiding clasp of your hands. And we were succored during our hardship in the arms of your embrace. Thus, I would like to offer an emendation to Newton’s words today: we are not standing on your shoulders—you are holding us there.

Classmates, among the many things that today represents, one of them is certainly the expiration date on any of our excuses for accepting the world’s problems as they are. Having all been granted our wish upon a star when we were admitted to Harvard, the world has bestowed upon us one of its highest privileges in the form of the education we received here and the degree conferred on this day.

The world’s many ills cry out for solutions, and who else should use the gift of this education to help solve them? My own field of obstetrics and gynecology is rife with these: the advancements of modern obstetrics have plummeted the maternal mortality rate wherever these advancements have reached, yet black women in the United States die during or around the time of childbirth at three times the rate of their otherwise matched white counterparts, a modern-day disgrace in our field. The oral contraceptive pill gave women unprecedented control over their bodies and the creation of their families, yet too many women today fret about declining fertility in their 20s and 30s as they work to build the careers and find the partners that equality is finally permitting them. If it is not the people under this tent who are called to help solve these problems, then who?

It is our sacred responsibility to extirpate systemic racism from medicine and other American institutions. It is our holy task to develop medical advancements that let women and men healthily start families exactly when they’re ready and not a day sooner. The list of unsolved problems in the world is daunting, yet I wake up each morning with a kernel of hope because I know the list of resources we can marshal to solve them is greater. It is our calling now to be healers of both the patients in front of us in our exam rooms and also of the larger society that has given us the gift of this degree, and with it, this calling.

If I have learned anything through my friendships with the remarkable people in this class over the past four years, it is that we are capable of rising to these challenges. Thank you to all of you for four of the most incredible years of my life, Class of 2019. Now let’s go forth and be the change we want to see in the world, with a flame of gratitude ever ablaze in our hearts for those to whom we owe our debts. Thank you. 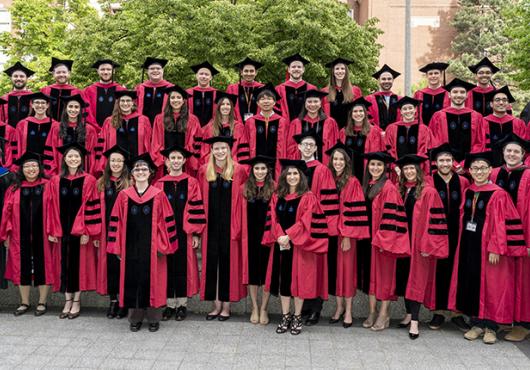 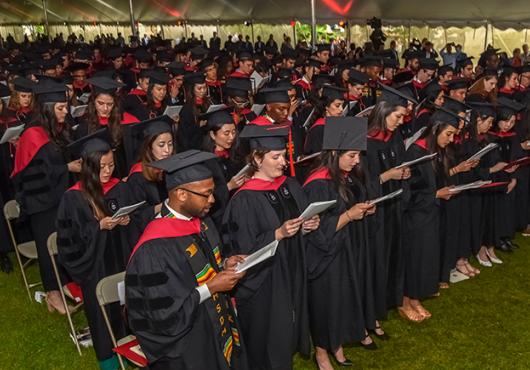 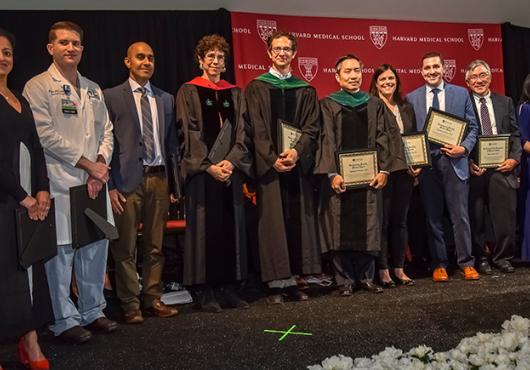 Faculty and staff recognized by graduates for passion, care