Death in a Nutshell 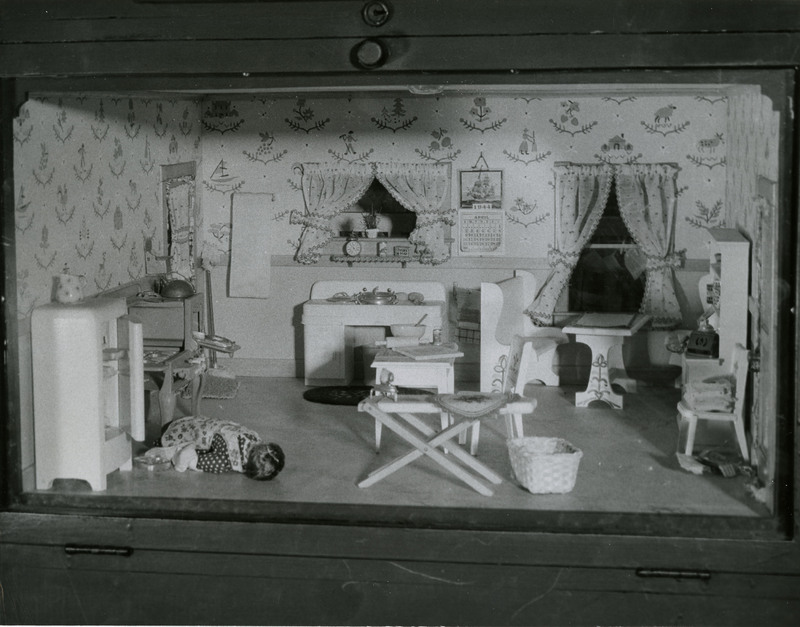 Photograph of The Kitchen in the Nutshell Studies of Unexplained Death by Walter L. Fleischer, circa 1946

The kitchen is cheery; there’s a cherry pie cooling on the open oven door. The iron awaits on the ironing board, as does a table cloth that needs pressing. The clock on the window sill indicates a midday scene of domestic industry, until one notices the woman lying on the floor in front of the icebox. She appears unruffled, her house dress and apron primly in place. But she isn’t napping. She’s dead.

Such details—and a host of obvious and not-so-obvious others—are incorporated into what may be the world’s smallest crime scenes, dollhouse-sized scenes of death that have fascinated police investigators, and many members of the public, for decades.

Nineteen of these miniature crime scenes, created by artist-criminologist Frances Glessner Lee more than 70 years ago for the former Harvard Medical School Department of Legal Medicine, will be on display at an exhibit opening Oct. 20 at the Renwick Gallery in Washington, D.C.

Lee, considered the godmother of forensic science, created what are known as the Nutshell Studies of Unexplained Death to be used as teaching aids when training forensic investigators  how to properly canvass a crime scene and effectively uncover and understand evidence.

The Renwick, the Smithsonian American Art Museum’s branch for contemporary craft and decorative arts, will exhibit the dioramas through Jan. 28, 2018.

Eighteen of the dioramas that will appear at the Renwick belong to HMS and are on long-term loan to the Maryland Office of the Chief Medical Examiner in Baltimore. An additional Nutshell model was discovered at Lee’s New Hampshire home and is being loaned to the Renwick by the Society for the Protection of New Hampshire Forests.

The Francis A. Countway Library of Medicine’s Jack Eckert, public services librarian in Countway’s Center for the History of Medicine, and Dominic Hall, curator of the Warren Anatomical Museum at the Center, have been working with Renwick staff as they prepare for the exhibit.

Harvard Medicine News talked with Eckert and Hall recently to learn more about the dioramas and the upcoming exhibit, “Murder Is Her Hobby: Frances Glessner Lee and the Nutshell Studies of Unexplained Death.”

How did the Renwick come to create an exhibit around the dioramas?

Hall: The curator at the Renwick heard about them, went up to Baltimore to see them, and became interested. She then began talking with the Baltimore medical examiner and us about mounting an exhibit of the studies.

Eckert: I think the Renwick’s interest is in showing the Nutshells as examples of the modeling crafts. They are astonishing. When I first saw them, I was blown away. You just can’t imagine the detail in them.

Why the resurgence in interest now?

Hall: There’s always been this pocket community that’s been interested in them. Photographers such as Corinne Botz have done photographic series on the dioramas. There’s been a couple of other photographic projects, and people have published items on the web about the Nutshells.

There also was a documentary made about them; in 2011 Susan Marks made a feature-length documentary of the dioramas that was narrated by filmmaker John Waters.

Eckert: There may also be an interest in reinterpreting Frances Lee’s work through a feminist lens by showing how she may have reclaimed the making of dollhouses by taking them out of the sphere of women and turning them into crime scene analysis tools.

What do you think investigators can still learn from the Nutshells?

Eckert: They were built to be exercises in looking, in analyzing, in making sure you’re not contaminating a scene, but also in making sure you see what the clues are and realize that the death could be murder, suicide, accidental or natural. The studies continue to teach that. They’re in fact still used in a teaching seminar on crime detection. So, yes, investigators can still learn from them.

How did the dioramas end up in Baltimore?

Eckert: My understanding is that in the 1960s the dioramas were being displayed on a mezzanine that had been built for them in Building E, which was part of what is now the Tosteson Medical Education Center. Around that time, Russell Fisher, a Baltimore medical examiner, took part in one of the training seminars for police officers organized by the Department of Legal Medicine. The department was closing, so Fisher took custody of the training program and moved it to Baltimore. He also requested the loan of the dioramas. They’ve been on long-term loan to the Baltimore ME’s office ever since.

Any chance they can come back to HMS or the Countway?

Hall: After the exhibit, the Nutshells will go back to Baltimore and continue to be used to train police officers. If one day Baltimore wants to turn them back over to the medical school—because they’re still the medical school’s property—I think we’d absolutely, enthusiastically have that discussion on how we could support them, bring them back and put them on display. It wouldn’t be a small effort. But everyone loves the Nutshells.