Rhythm of a crucial anticancer protein can determine cell fate 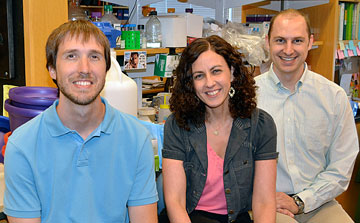 Strike a piano key, and you produce a note. Hit it four times, and you’re playing Beethoven’s Symphony No. 5. Hit it 400 times, and you’re in Philip Glass territory. Cells, too, can play different tunes with the same note, new research suggests, a finding with broad implications for our understanding of biological signaling and potential new therapies.

A damaged cell faces a critical decision: To pause temporarily for DNA repair, or to permanently stop dividing. Research at Harvard Medical School illuminates how the same crucial protein can dynamically trigger either event. The protein, p53, is known as the “guardian of the genome” because it is activated when cells are under stress and prevents damaged cells from growing.

When cells suffer DNA damage, for example (as skin cells do when they are exposed to excessive radiation), the level of p53 is increased. This may cause the cell to delay genetic replication to provide extra time to repair the DNA. Sometimes, however, p53 triggers terminal fates such as cell death or permanent arrest, ending cell division and preventing potentially cancerous growth. The protein is one of the most important natural protections against cancer, and many tumors arise because of mutations in the gene that encodes it.

“Little is known about why some cells recover and grow while others stay arrested,” said Galit Lahav, associate professor of systems biology and senior author on the paper, published June 15 in the journal Science.

Over 60,000 studies in the last 30 years testify to the tumor-suppressing prowess of the p53 protein, whose gene is missing or malfunctioning in most human cancers, and to the scientific interest in figuring out how to manipulate p53 to kill mutated cells more efficiently while safeguarding normal cells.

In 2004, Lahav and her collaborators reported that in response to DNA damage, cells produced p53 in a series of intermittent pulses.

“Since then, we and others have suspected that these p53 pulses are important in the downstream decisions made by the cell,” Lahav said.

In their latest study, the researchers used a combination of mathematical modeling and experiments to tweak the dynamics of the p53 signal: What if the pulse were longer? Stronger? Constant? Jeremy Purvis, first author on the Science paper and postdoctoral fellow in Lahav’s lab, used a computational model, previously developed in the lab, that learned from a series of dynamic experiments to suggest new quantitative alterations to the p53 signal.

Pulsed p53, the researchers observed, selectively activated a subset of target genes that interrupts the cell cycle for DNA repair, triggering a temporary response to DNA damage and allowing recovery. In contrast, a sustained p53 signal triggered terminal genes and accelerated permanent arrest, even when controlling for time-integrated levels of the protein.

This observation fit a known paradox about damaged cells: The trigger for cell death or permanent arrest wasn’t the amount of DNA damage, but the persistence of the damage. “It could just be one or two little breaks, but if they weren’t going away, this is what drove cells into senescence,” Purvis said. “So in this study our findings are consistent with that. The importance of the pulses is to track the amount of time that’s elapsed since the damage occurred. These findings illuminate a physiological mechanism by which cells are able to escape cancer by triggering senescence.”

More broadly, the researchers said, the study suggests that many kinds of cellular information may be encoded through protein dynamics—not only the presence and level of a signal, but how that signal changes over time. The ability to spot and modify those dynamics may enable new pharmacologic strategies for altering cell fates in many diseases.

“One exciting prospect is that this may be shown to be a general mechanism, that cells are often using regulation of protein dynamics to control function,” Purvis said. “That would give us the opportunity to engage these kinds of dynamical patterns by drugging cells over time, in certain sequences, and by engaging these dynamical systems in order to alter their fate.”

“This is a powerful idea,” Lahav said. “Protein signals—and potentially new drugs—are not only notes you can turn up or down, but a melody you can hear and play.”