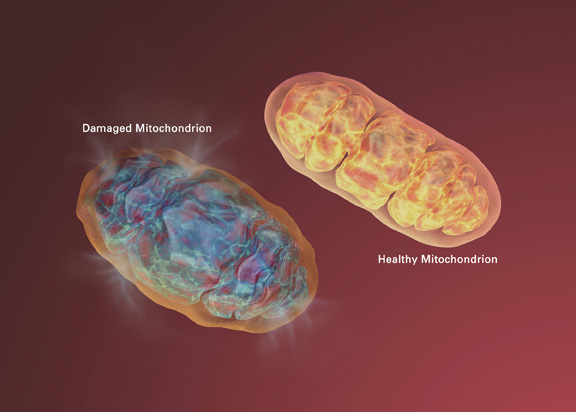 When mitochondria—the cell’s power plant—are sick or damaged, they must be cleared away so the cell can survive.

In the brain, this mitochondrial quality control pathway is so critical that neurodegenerative disease can result if bad mitochondria accumulate in neurons.

Now, Harvard Medical School researchers have mechanistically connected this pathway—which is already linked to Parkinson’s disease—with proteins that are mutated in amyotrophic lateral sclerosis, the motor-neuron disease also known as Lou Gehrig’s disease. Their findings are described in Molecular Cell.

In healthy cells, damaged mitochondria are broken down and disposed of by a process called selective autophagy, a term stemming from Greek roots that translates as “self-eating.” How the mitochondria get tagged for disposal has been the subject of research in many labs around the world in recent years.

Mitochondrial damage triggers activation of two proteins—PARKIN and PINK1—that tag the mitochondria surface with chains of ubiquitin, molecules that signal the cell to get rid of the defective mitochondria. These proteins have been known for more than a decade to be faulty in early-onset familial forms of Parkinson’s disease, but only recently have their roles in mitochondrial quality control been elucidated.

Most recently, scientists have been studying how cells recognize these disposal signals and which proteins are involved further downstream in the disposal process.

Initial key insights into the downstream mechanism were suggested several years ago by the finding that the autophagy cargo receptor protein OPTN functions together with the TBK1 protein kinase in the removal of pathogenic bacteria from cells via autophagy. Interestingly, both OPTN and very recently TBK1 were also found to be mutated in ALS, but how these proteins contribute to this neurodegenerative disease has remained poorly understood.

Importantly, binding of the OPTN-TBK1 complex to these ubiquitin chains promotes TBK1 activation and further activation of OPTN’s ubiquitin-binding activity, establishing a self-reinforced feed-forward mechanism that is critical for the ultimate delivery of mitochondria to the autophagosome.

By using state-of-the-art quantitative mass spectrometry coupled with gene-editing and cell-imaging tools, the new study provides a detailed picture of how these two pathways work together and suggests how they may link the two neurodegenerative diseases.

“This is the first time we could mechanistically show how ubiquitination of damaged mitochondria promotes their clearance, and suggests that mitophagy defects potentially contribute to ALS as well as Parkinson’s disease,” said Harper, who is Bert and Natalie Vallee Professor of Molecular Pathology and chair of the HMS Department of Cell Biology.

Alban Ordureau, a postdoctoral fellow in the Harper lab and a co-author of the paper, had previously studied how PARKIN and PINK1 work together biochemically to specifically tag damaged mitochondria with ubiquitin.

“The story here focuses on how, once mitochondria are ubiquitinated, they are recognized by the cell and gotten rid of by proteins implicated in two distinct neurodegenerative diseases,” said Ordureau.

Jin-Mi Heo, postdoctoral fellow in the Harper lab and lead author of the paper, discovered that TBK1 becomes activated when mitochondria are damaged via ubiquitin chain binding by OPTN.

“If there is stress happening in the same cell in one pathway, that might cause defects in other pathways,” Heo said. “That could be why we see similar characteristics in different diseases with different origins.”

In Parkinson’s disease, neurons that make the neurotransmitter dopamine are defective while in ALS, the motor neurons do not perform as they should.

“There are some very complex relationships between different mutations that are going to lead to disease and which cell types they act in,” Harper said. “Depending on the cell type, you get one or the other disease.”

One idea is that individual types of neurons are sensitive to toxic proteins or toxic organelles—such as damaged mitochondria—in different ways. Motor neurons, for example, are much longer than most neurons in the brain, so they may be more sensitive to the accumulation of certain types of toxic proteins or organelles than other types of neurons, Harper said. The mutations that are present in the individual diseases may reflect sensitivities to different types of autophagic cargo; the result is motor neuron disease in ALS or dopaminergic disease in Parkinson’s.

“The surprising thing is that the Parkinson’s genes are functioning upstream of a pathway that’s mutated downstream in motor neuron disease,” Harper said. “So there is a genetic sensitivity within the pathway that must be different in different cells.”

It may turn out that this is a general mechanism that cells use to get rid of a variety of damaged material in different kinds of neurons.

“We’re starting to work that out,” Harper said.

This study was supported by National Institutes of Health grant R37 NS083524, Biogen and the Edward R. and Anne G. Lefler Center for the Study of Neurodegenerative Disorders at HMS.  Harper is a consultant for Millennium: the Takeda Oncology Company and Biogen.