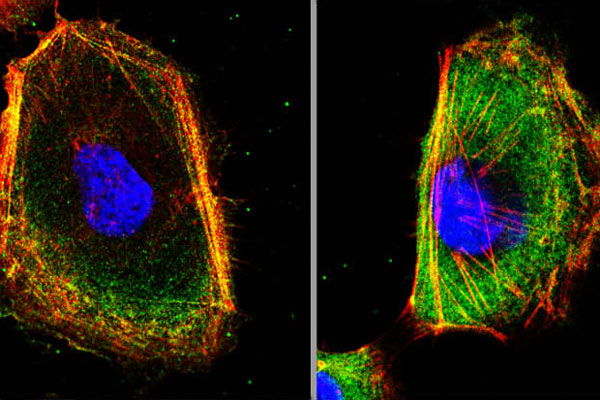 PI3K (phosphoinositide 3-kinase) is a cell-signaling molecule that has now been implicated in a large number of women’s cancers including breast, ovarian and endometrial cancers.

“This study demonstrates that PI3K is a master regulator, integrating a cancer cell’s architecture and its metabolism.” — Gerburg Wulf

New research led by a scientific team at Harvard Medical School and Beth Israel Deaconess Medical Center provides important insights into the biology underlying PI3K’s role in glycolysis, the metabolic process that enables cancer cells to thrive by generating biomass and energy. Reported in today’s issue of the journal Cell, the new findings confirm the importance of sugar to cancer survival and provide essential new information for the development of PI3K-inhibitor drugs as targeted cancer therapies.

“This study demonstrates that PI3K is a master regulator, integrating a cancer cell’s architecture and its metabolism,” said corresponding author Gerburg Wulf, associate professor of medicine at HMS and an oncologist in the Cancer Center at Beth Israel Deaconess. How are sugar breakdown and cellular architecture coordinated? The answer, said Wulf, turns out to be a surprisingly simple biophysical mechanism.

“In a normal cell, signaling from outside activates the cytoskeleton, the highly organized and flexible framework of the cell,” explained Wulf. “The cytoskeleton is not static; it’s a dynamic assembly of fiber bundles that undergo constant turnover, breaking down the energy molecule ATP in order to maintain the cell’s shape.” These fibers are composed of the protein actin, and Wulf’s team discovered that when PI3K is activated and ATP breakdown is accelerated—as occurs in cancer cells—the actin fibers fall apart and release an enzyme called aldolase.

“It turns out that enzymes sit on these actin fibers, like birds might sit on a telephone wire,” she adds. “If the wire is cut, the birds fly away. Similarly, when actin fibers are broken down, the aldolase enzymes fall off. We discovered that it’s the process of ‘falling off’ that activates aldolase—and accelerates glycolysis.”

PI3K was first discovered 20 years ago by Lewis Cantley, director of the Sandra and Edward Meyer Cancer Center at Weill Cornell Medical College and the study’s co-senior author. When it functions normally, the PI3K pathway regulates key cell functions including growth, motility, proliferation and differentiation. But an overactive PI3K signaling pathway can contribute to the development of breast, ovarian and endometrial cancers. Based on these observations, the development of PI3K inhibitors has been a major focus of personalized cancer therapies.

“Inhibiting PI3K leads to a profound inhibition of glucose breakdown,” explained Wulf. “This is particularly important for cancer cells because they rely heavily on the metabolism of sugar for their self-renewal, generating not only energy but also biomass, the building blocks with which DNA and proteins are made.”

“Aldolase is distinct from other enzymes involved in glycolysis in that it catalyzes the breakdown of the 6-carbon backbone of sugar into two 3-carbon molecules,” said Wulf. “These 3-carbon building blocks can then be the starting points to generate new biomass that ultimately enables cell division and the expansion of the tumor mass.”

This new discovery creates a previously unidentified link between a cancer cell’s form and shape and its metabolic capabilities, say the authors, explaining that this method doesn’t involve any nuclear transcription or translation, rather it is redistribution of the aldolase from the cytoskeleton into the cytoplasm that paces glycolysis.

“This is a very important discovery in that it indicates that the highly motile actin—long known as a hallmark of cancer cells and the property that makes them look transformed to the human eye—is, in fact, playing a major role in regulating cancer metabolism,” said Cantley.

“As a physician-scientist, I develop research questions based on the clinical needs of my patients,” said Wulf. “The need for new therapies to treat women’s cancers, in particular metastatic breast cancer as well as ovarian and uterine cancers, is great. As we continue our investigations of PI3K, it’s becoming clear that blocking this pathway alone is not enough to stop cancer growth and that PI3K inhibitors may be drugs that need to be combined with other drugs to effectively and specifically block tumor-cell metabolism. These new findings provide us with essential information as we work to identify the companion therapies that will prove to be good partners for PI3K inhibitors.”