The discovery, described in the Feb. 1 issue of Biological Psychiatry, is the first in a series of studies aimed at understanding how specific types of childhood adversity affect brain physiology. The findings bring new hope to people suffering from psychiatric disorders by taking a step toward identifying potential causes and by opening up the possibility for individualized, brain-based interventions in the future.

Principal investigator Martin Teicher, HMS associate professor of psychiatry at McLean Hospital, became interested in the effects of parental verbal abuse 25 years ago. A patient of his showed all of the signs of being traumatized as a child, but the only form of maltreatment she had been exposed to was parental verbal abuse.

Later, in 2005, Teicher’s research revealed that parental verbal abuse has the same negative psychiatric influence as witnessing domestic violence or experiencing extrafamilial sexual abuse. His latest study, which shows that verbal abuse damages specific brain connections, is part of a strategy to isolate different types of abuse, including witnessing domestic violence, childhood sexual abuse and harsh corporal punishment, and to examine the specific effects of each on the developing brain. The researchers designed this strategy around a hypothesis that all of these will act as stressors that produce similar responses in the brain but along different sensory pathways, said Teicher.

The study on verbal abuse is the first to be published, though the overall hypothesis on distinctive sensory damage has so far panned out when the unpublished work is also considered. The findings of this study “set the stage for what we’re seeing in the other ongoing studies—that sensory systems are vulnerable,” said Teicher. “The brain is probably suppressing the development of sensory systems that are providing adverse input.” That is, children’s brains seem to “turn down the volume” on abusive words, images and even pain. The result is diminished integrity in these sensory pathways.

“This is the first evidence of the potential deleterious effect of ridicule, humiliation, and disdain on brain connectivity,” said Jeewook Choi, first author and visiting assistant professor of psychiatry from South Korea.

The study consisted of a small sample size of 16 adults who had experienced chronic parental verbal abuse but no other type of abuse and 16 who had never experienced any form of abuse. To identify participants, the researchers screened more than 1,200 people from the local community using an online assessment tool. They further narrowed the pool through a three-day interview process.

They then scanned each participant using a neural imaging technology called diffusion tensor magnetic resonance imaging. Diffusion tensor imaging (DTI) allows researchers to look at the whole brain and perform “virtual dissections of the living human brain,” wrote psychiatrist Marco Catani of King’s College London in a 2006 review of the technology. The result is an accurate map of the fiber connections in the brain’s white matter.

The technology bases its virtual dissection on measurements of the flow of water molecules along tubelike axonal pathways. In this study, the key finding is not that these fiber pathways exist, but rather that some have been disturbed. Among those who experienced parental verbal abuse, three statistically significant disturbed pathways emerged: the arcuate fasciculus, involved in language processing; part of the cingulum bundle, altered in patients with posttraumatic stress disorder and associated with depression and dissociation; and part of the fornix, linked to anxiety. The degree of disruption of the normal flow correlated with the severity of abuse.

“The fact that early abuse actually shows up in your brain structure late in life is a huge finding,” said co-author Michael Rohan, a physicist and lecturer in psychiatry at McLean, who helped interpret the imaging data. “Who knew that it would carry over like that?”

Though the realization may be revelatory, it is too early to act on with anything other than additional research. Not only is a study of 32 people too small for any kind of clinically applicable findings, the imaging technology itself is not yet powerful enough to reveal the exact nature of the disturbances in these pathways.

“The areas we found were on the edge of being viewable,” said Rohan. “If we had a scanner from 2001, we wouldn’t have seen them.” The new scanner the McLean team expects to install later this year will likely reveal more details about these specific disruptions and may even identify others that this study missed.

The findings come at a time when psychiatry is changing dramatically. “Psychiatric disorders likely emerge when genetic susceptibility intersects with exposure to adversity during a sensitive developmental period,” said Teicher. Modern imaging and genomics tools are helping researchers detect these underlying causes, which may lead to treatments that target causes rather than symptoms. 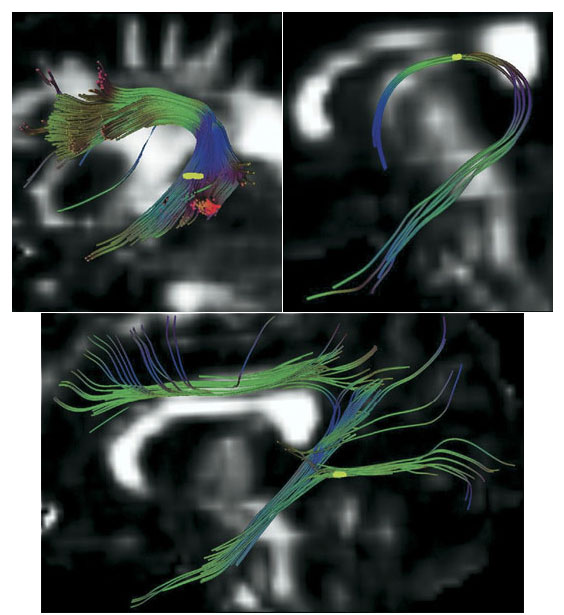 For instance, two people who show the same symptoms of depression today may be treated the same. Yet one condition may stem mostly from genetic susceptibility and the other mostly from exposure to childhood adversity. Though the two patients may appear to have the same disorder, “different brain regions or structures may be involved,” said Teicher. “Each may need a very different kind of therapy.”

Teicher and his team are now working to identify sensitive periods when specific brain structures are most susceptible and, if possible, to find ways to reverse the damage.

For now, however, the most important message of this work may be the awareness that parental verbal abuse is damaging. “People hear that spanking is bad, so they stop doing that and become more verbally abusive,” said Teicher. “It turns out, that may be worse.”

Students may contact Martin Teicher at martin_teicher@hms.harvard.edu for more information.

Conflict Disclosure: The authors report no conflicts of interest.