Hope for decreasing bullying among society's most stigmatized youth 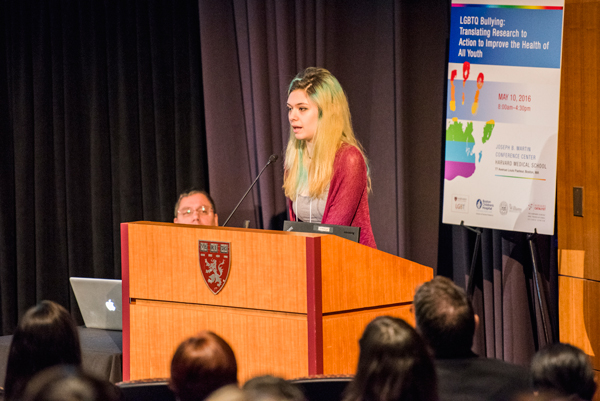 Bullying started early for Nicole Maines, now a college freshman, who has known since she was 2 years old that she was not the boy she was born as. She wanted to dress as Ariel the mermaid in a world that expected her to be a Batman.

"The work of social change is neither art nor science; it is a kind of alchemy." — Eliza Byard

By age 12, her transition was complete. She took the name Nicole and switched to using the girls bathroom at school. But one complaint was all it took to unleash what Maines called “the adults with outdated values who don’t understand or don’t want to understand.”

“No one should have to grow up being bullied for who they are,” Maines said.

Maines’ story set the stage on May 10 for an all-day symposium on LGBTQ bullying at Harvard Medical School entitled “Translating Research to Action to Improve the Health of All Youth.” The event was sponsored by several organizations, including the Health Disparities Research Program at Harvard Catalyst: The Harvard Clinical and Translational Science Center, the Williams Institute at UCLA Law, Boston Children’s Hospital Division of General Pediatrics and the LGBT Office of the HMS Office for Diversity Inclusion and Community Partnership.

The focus of the symposium was on the bullying—the constant name-calling, backstabbing, threats and violence that cause stress and have long-term physical and mental health consequences—endured by transgender as well as lesbian, gay, bisexual and queer youth.

Mark Schuster, the HMS William Berenberg Professor of Pediatrics at Boston Children’s and chair of the symposium planning committee, introduced the day, underlining the timeliness of this event as a call to action for interdisciplinary practitioners to come together in thoughtful dialogue. “We designed the symposium to bring together teachers, school administrators, clinicians, advocates, parents, youth, researchers and others who are concerned about bullying of sexual and gender minority youth,” Schuster said.

Speakers outlined the sobering statistics on the prevalence of bullying. “Over 70 percent of all kids say by the end of high school that they have been bullied at least once, and LGBT youth are at heightened risk,” said Jaana Juvonen, professor of developmental psychology at the University of California, Los Angeles. In her overview of stigma-based bullying, she said targets groups are those who identify as LGBTQ or those who are obese.

Those perceived as having a different sexual orientation or gender identity are twice as likely to be bullied, said Mark Hatzenbuehler, co-director of the Center for the Study of Social Inequalities and Health at Columbia University’s Mailman School of Public Health. He said 83 percent of transgender youth reported being bullied in the last 12 months.

Efforts to stop bullying face many challenges, which were cited throughout the day, but hope was also pervasive.

“The landscape of our work has been changed forever,” Byard said. “Lynch spoke directly to our transgender community, saying that we see you and will do everything we can to protect you.”

Advocates have their work cut out for them. More bullying occurs in neighborhoods with the most police-reported hate crimes, Hatzenbuehler reported.

“Intolerance and bias have a cascading effect,” Hatzenbuehler said.

What is good for youth in a stigmatized group is also good for all youth, he added.

“There are fewer suicide attempts in districts with inclusive anti-bullying policies. All youth are less likely to report school-based harassment in these districts,” Hatzenbuehler said.

Bullying victimization experiences are pervasive for transgender youth who have a gender identity different from their sex assigned at birth, said Sari Reisner, HMS assistant professor of pediatrics at Boston Children’s. He noted that gender expression is also a determinant of bullying victimization.

“Whether LGBTQ or straight, youth who have a nonconforming gender expression—i.e., mannerisms, clothing, behaviors that fall outside of or do not meet societal expectations of what it means to be a “girl” or a “boy”—are highly vulnerable to experience bullying victimization,” Reisner said. “Understanding more about gender differences can inform future interventions on LGBTQ and gender-based bullying, including promoting health and wellbeing for all youth.”

Symposium panelists highlighted other actions aimed at countering LGBTQ bullying, such as

“We’ve got to make sure that young people understand that difference doesn’t mean deficit,” said Polly Gipson, a clinical psychologist at the University of Michigan.

There are numerous interventions designed to reduce bullying in schools, but the best known approaches only reduce bullying by about 17-23 percent on average, said Valerie Earnshaw, HMS instructor in pediatrics at Boston Children’s.

Reviewing the literature, she found only seven studies specific to LGBTQ bullying.

“Some of the most exciting interventions are happening outside of peer-reviewed literature,” she said.

She cited the Massachusetts Safe Schools Program for LGBTQ Students and GLSEN’s Safe Space Kit as examples of promising programs.

In closing remarks, Byard of GLSEN, echoed a call heard throughout the day. She encouraged the audience of more than 300 researchers, medical doctors, youth educators and LGBTQ activists to work together to bridge the divide between research and practice.

“The work of social change is neither art nor science; it is a kind of alchemy,” Byard said. “I want you all to be alchemists and make change happen.”

Applauding the collaborative nature of the event, Schuster was pleased with the enthusiasm in the room and the participants’ willingness to share their ideas around this topic. “This was a unique opportunity to bring together experts in this field—and invite attendees who care passionately about this important topic. The symposium helped facilitate a terrific dialogue among people who don’t always get a chance to interact.”