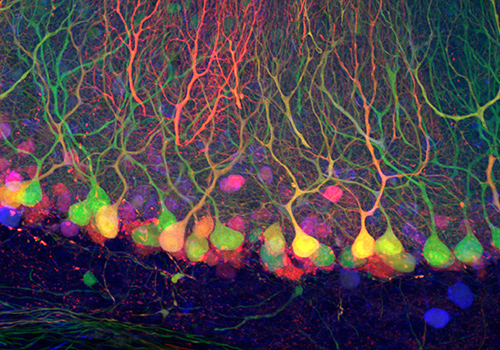 Want to see where a particular gene is active? Use green fluorescent protein, or GFP, and the cells will light up.

Want to turn that gene on or off in an organism? You might use an enzyme called Cre recombinase.

Want to turn a gene on or off only in one cell type? That’s tough.

But the job just got a lot easier: Harvard Medical School researchers have found a way to combine GFP and Cre.

The new tool, called “Cre dependent on GFP” or Cre-DOG for short, piggybacks Cre onto GFP so researchers can not only look at but also manipulate genes in GFP-expressing cells while leaving other cells alone.

“In one step you can go from just looking at a cell to asking something about its physiology, its circuitry and its anatomy. That’s very powerful,” said Connie Cepko, the Bullard Professor of Genetics and Neuroscience at HMS and senior author of the study, published in Nature Neuroscience.

Over a thousand transgenic mouse lines have been engineered to express GFP in particular kinds of cells, while there are far fewer Cre lines. Cre-DOG allows researchers to skip the laborious creation of Cre lines by doing more with existing GFP lines.

“It opens up genetic manipulations in a much larger number of specific cell types and saves a huge amount of time and money,” said Cepko. “The more we know about how cells function, the better we can understand disease and development, allowing us to design more effective therapies.”

“In our lab we have a lot of mouse lines that express GFP, but so far, we only use them for anatomical studies. Now we can use them to study circuit function and development in the brain, define the roles of subpopulations of neurons within a circuit and study which neurotransmitters they release,” said Stephanie Rudolph, a postdoctoral researcher in the lab of HMS neurobiologist Wade Regehr and second author of the paper.

Cre-DOG was the brainchild of Jonathan C.Y. Tang, a postdoctoral researcher in the Cepko lab and first author of the paper.

Tang split the Cre enzyme in two, which inactivated it. He attached each half to a portion of a GFP antibody that had recently been generated through the immunization of camels.

Cre-DOG expanded on a similar tool that Tang and colleagues reported in 2013. That tool requires an extra component to generate Cre activity and may be more toxic than Cre-DOG. Both tools have their advantages, the authors said, and researchers might want to use one over the other depending on their project.

One perk of Cre-DOG is that the Cre-and-antibody molecules can be injected using adeno-associated viruses, or AAVs, a tool many researchers already use.

“From the standpoint of a mentor, it’s really wonderful to see a student come in with a very cool and clever idea and bring it to fruition,” said Cepko. “There is also pleasure in making tools that move all of us forward.”

Tang and Cepko collaborated with researchers at HMS, including the Regehr lab and the lab of David Ginty in the Department of Neurobiology, as well as scientists at the University of California, San Diego, to test Cre-DOG in different kinds of cells. They were able to show that it works in the retina, the cortex and the spinal cord.

“I think every human being wants to understand how the brain works,” added Tang. “We are at the forefront of that endeavor, but we still don’t have all the tools. This work expands our arsenal of genetic tools to study that question.”