“Bet hedging” explains the efficacy of many combination cancer therapies 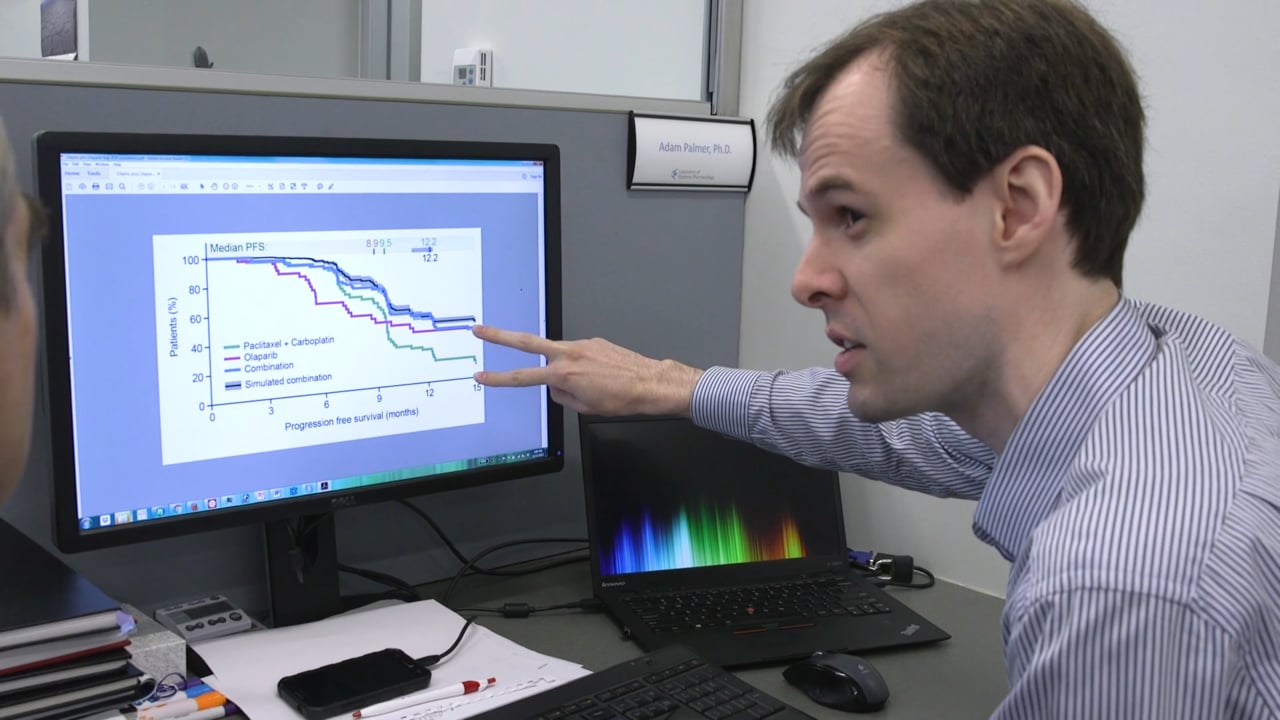 The efficacy of many FDA-approved cancer drug combinations is not due to synergistic interactions between drugs, but rather to a form of “bet hedging,” according to a new study published by Harvard Medical School researchers in Cell on Dec. 14.

Reanalyzing data from 15 clinical trials, the researchers show that independent action—in which drugs do not enhance each other’s effectiveness—can accurately explain gains in survival for most combination cancer therapies when compared to single-drug treatments.

“Many patients are likely responding to only one of the drugs, and the other may be doing little to nothing but generating toxic side effects” - Adam Palmer

Genetic variations in cancer from one person to another lead to differences in drug response, the researchers said, and treating populations of patients with multiple drugs boosts the likelihood that a patient will benefit from at least one of them.

This finding differs from current hypotheses about drug interaction, which have commonly explained benefits as arising from drug synergy. However, this should not be interpreted as diminishing the value of combination therapy for patients, the team cautions.

Instead, they argue that exploiting drug independence represents a powerful approach for developing better combinations and treatment strategies in the absence of a complete understanding of disease.

A focus on maximizing the odds of a patient responding to at least one drug, for example, could support treating patients with drugs sequentially instead of simultaneously, thereby reducing compounding side effects, enabling higher dosages when effective and potentially lowering treatment costs.

“Our study provides a conceptual framework for rethinking how and why drugs should be given in combination,” said senior study author Peter Sorger, the Otto Krayer Professor of Systems Biology at HMS and director of the Harvard Program in Therapeutic Science and the Laboratory of Systems Pharmacology.

This results underscore the importance of developing new methods to identify which patients respond best to which drug and to maximize the odds of treatment success, the authors said.

“Positive results for combination cancer therapies have commonly been interpreted as patients needing two or more drugs to shrink their tumors and for them to get better, but our analysis suggests this is often not the case,” said study author Adam Palmer, research fellow in therapeutic science at the Laboratory of Systems Pharmacology.

“Many patients are likely responding to only one of the drugs, and the other may be doing little to nothing but generating toxic side effects,” he said. 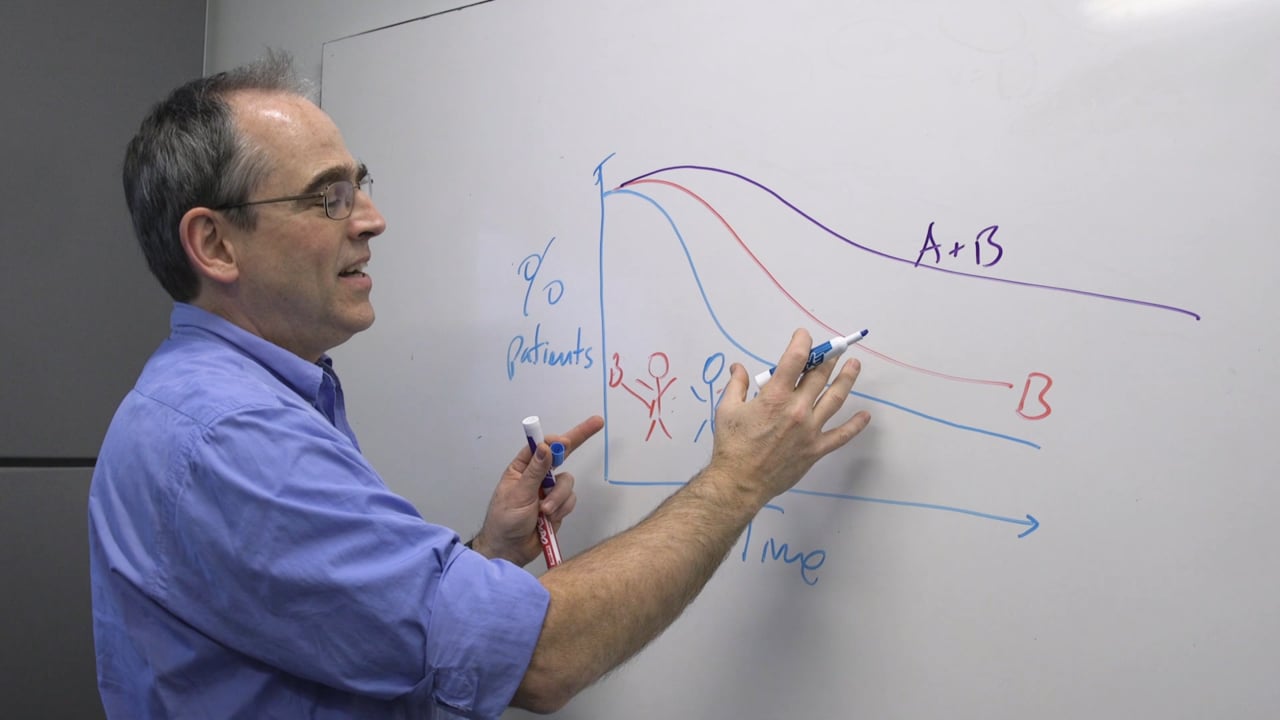 The efficacy of combination cancer therapies

Combination therapies are a mainstay of modern cancer treatment, supported by numerous clinical trials showing that patients who receive two or more drugs respond better than those who get single-drug therapy.

The design of most combinations is based on a sound biological rationale: Drugs targeting the same or complementary molecular pathways should be able to enhance each other’s efficacy. This additive or synergistic effect is thought to render tumors less resistant to therapeutics and allow the use of lower doses to lessen toxicity.

Due to the genetic and molecular variability of human cancers, it is difficult to predict whether a treatment will be effective for any individual patient. This unpredictability holds true even for cancer therapies tested on different tumor cell cultures in controlled laboratory experiments. Prompted by this observation, Palmer and Sorger investigated whether this variability contributes to the clinical efficacy of drug combinations.

To do so, they reanalyzed human clinical trial data where combination and single therapies were compared.

For example, a recent phase 3 trial of two FDA-approved immunotherapy drugs for melanoma—ipilimumab and nivolumab—found that combination therapy allowed half of the patients to survive longer than 13 months without their disease getting worse. In comparison, half of the patients treated with either agent alone survived longer than three and seven months, respectively, with their disease kept at bay.

Next, Palmer and Sorger used computational models to simulate how patients would fare if they had received treatment with only the drug that was better matched to their individual tumor. The team predicted that half of the patients in this scenario should survive longer than 14 months without worsening disease, a number that nearly mirrored the actual clinical trial outcomes.

The pattern held true for the majority of trials they analyzed—including ovarian cancer, breast cancer, pancreatic cancer and metastatic melanoma—suggesting that independent drug action can explain the efficacy of many combination therapies. Roughly a third of the trial data did not match their simulations, suggesting that these cases represented truly synergistic drug interactions.

The team also analyzed a database in which dozens of combination and single therapies were tested on hundreds of human-derived tumors implanted in animals. Drug independence explained the superiority of combination therapies across nearly all drugs and tumor types in these experiments, the team found.

In these animal experiments, each single human cancer had been implanted into several animals that receive different treatments, which allowed the best personalized treatments to be identified. The team’s analysis, however, revealed that survival for the best single treatments was statistically indistinguishable from the best combination therapies.

If it exists, drug synergy can only be identified in the small subset that responds to both drugs, which means that the majority of patients are benefiting only from independent action, Palmer and Sorger argue.

“We simulated what effects bet hedging with drugs that act independently would have on patient populations, and our models precisely agreed with the observed data,” Palmer said. “This analysis shifts the perspective for thinking about drug combinations from a molecular rationale to a probabilistic one. They are useful even when we cannot predict which patients need which drugs, a finding that is a strong argument for advancing precision medicine.”

This framework also allows researchers to identify truly synergistic drug combinations and better design clinical trials by estimating the baseline benefit of combinations if they are not synergistic. Drugs that enhance each other’s efficacy should exceed the benefits predicted by independent action.

“The fact that so many drugs conformed to this expectation tells us how much better drug combinations really could be,” Sorger said. “Our findings only emphasize how important it is that we improve our understanding of the mechanisms of drug action at the level of a single patient.”

“What we want when we combine drugs is a greater chance of hitting a home run and a reduction in adverse effects,” he added. “We should be focusing on how to identify which of the drugs a patient is responding to, and get them off the other ones.”

During the course of their investigation, Palmer and Sorger found that the idea of independent action was not new but had, in fact, been proposed decades ago. Researchers in the 1950s and ‘60s made the case that combination therapies could be used to overcome tumor variation, but the concept was marginalized as scientists focused on genetic and molecular rationales of synergy. The data was not then available to test these ideas, however.

“Modern data science helped us rediscover a way of thinking about drugs given in combination, which we believe will help us develop new drugs and treat today’s patients,” Sorger said. “We realized how much we didn’t know about drug combinations when we looked at it more deeply. Scientific progress requires us to continuously reevaluate and improve on our ideas. Basic, fundamental studies can help come up with better practical solutions.”

This study was supported by a National Health and Medical Research Council of Australia Early Career Fellowship and the National Institutes of Health (GM107618).