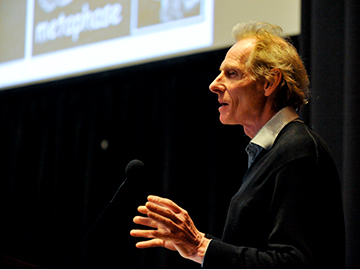 Glowing ghostly green on the large screen, pairs of identical chromatid copies condense into X shapes as a cell prepares to divide.

Spindly red microtubules latch on to each chromatid pair at the junction of the X. The pairs line up.

On cue, the microtubules give a tug that splits the pairs in two and pulls them to opposite ends of the cell.

“That’s about as interesting a thing as you can study in biology, and so much of it remains poorly understood,” said Kim Nasmyth, the Whitley Chair of Biochemistry at the University of Oxford, who is credited with helping reveal what controls chromosome cohesion and separation during cell division.

Nasmyth was the featured speaker at the 2014 Edward K. Dunham Lectureship for the Promotion of Medical Sciences at Harvard Medical School.

In two lectures, “How Are Chromosomes Held Together?” and “The Metaphase to Anaphase Transition: Controlled Destruction of Sister Chromatid Cohesion,” delivered March 17 and 18 at HMS, he described how his lab and others made fundamental discoveries in chromosome regulation—and explored some of the mysteries that remain. 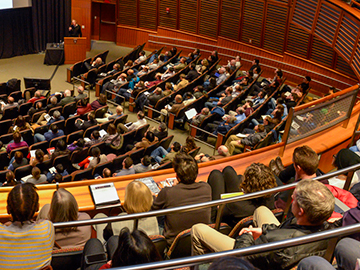 “The big questions in cell biology remain staring us in the face: How are chromosomes built, segregated and regulated? Kim has made contributions to all three areas that are at the very top in the world today,” said Marc Kirschner, the John Franklin Enders University Professor of Systems Biology and founding chair of the Department of Systems Biology at HMS, in his introduction to the first lecture. “Nasmyth has had such a profound impact on modern biology.”

One of Nasmyth’s best-known discoveries revealed that the splitting of chromatid pairs requires the destruction of a protein, securin, which then activates an enzyme, separase.

Nasmyth helped illuminate more of the process by showing that chromatid pairs are held together by a lasso-like protein ring he co-discovered, called the cohesin complex. When securin is destroyed, separase is freed to cut the rope, and the chromatid pairs fly apart.

Nasmyth went on to identify the three proteins that make up the cohesin rope, and he demonstrated how it is assembled and then becomes looped around the chromosomes.

Even after achieving these critical insights, Nasmyth said, questions abound.

When it comes to studying chromosome cohesion, “A little bit of knowledge creates a great deal of ignorance,” he said.

The questions Nasmyth probed in the Dunham lectures included: What determines chromatids’ cylindrical shape, length, thickness and elasticity? How are chromosomes held together stably, for long periods of time? How can a cell undergoing meiosis (division that leads to sperm and eggs) tell when it is pulling “mom” and “dad” chromatids apart? What helps organize the pairing-up and splitting of chromatids in the first set of meiotic divisions versus the second?

Nasmyth repeatedly emphasized that establishing tension is key. Metaphase—the stage of mitosis where the microtubules attach to chromatid pairs that line up along an invisible axis—is like a game of tug-of-war, he said. The microtubules on one side of the cell must encounter resistance from the microtubules on the other side of the cell when they hook onto the kinetochores connecting each chromatid pair. If they don’t, the cell receives a warning signal and won’t progress to anaphase, where the pairs are pulled in half.

“Microtubules are only able to pull sister chromatids apart because something else is holding them together,” he pointed out.

Cohesin not only provides that counterforce but also helps the microtubules attach to chromatids in the first place. Nasmyth delved into the details of how cohesin’s ring structure has been determined and the roles its four subunits play in opening and closing the ring. He also discussed the different types of cohesin and described the molecular gate that allows the cohesin ring to slide on and off chromosomes at just the right time.

Nasmyth also explored the structure and function of a related complex called condensin, which works with cohesin to regulate not only chromatid separation but also the condensing of chromosomes at the beginning of cell division. He outlined the two types of condensin, which share some building blocks with cohesin, and described ongoing work to pinpoint exactly what each type does.

If the unknowns seem intimidating, Nasmyth said, researchers can take heart that so many of the questions that have been raised are producing testable hypotheses.

“These things evolved four billion years ago. The idea that the odd yeast geneticist is going to solve it in a few years was very naïve,” said Nasmyth. “I think it’s going to take a lot of very talented biochemists and cell biologists many years to crack this problem.”

“I wish more people wanted to do this,” he added. “It’s not very fashionable, but this is my plea. I’m bowing out soon. This is a very deep problem and I can’t think of a more interesting piece of enzymology to study.”

The prestigious Dunham Lectureship was established in 1923 in memory of Edward K. Dunham (Harvard, 1886) to strengthen the bonds of fellowship and understanding among students, investigators and teachers within the medical and basic sciences for the purpose of advancing medical sciences in the broadest sense.