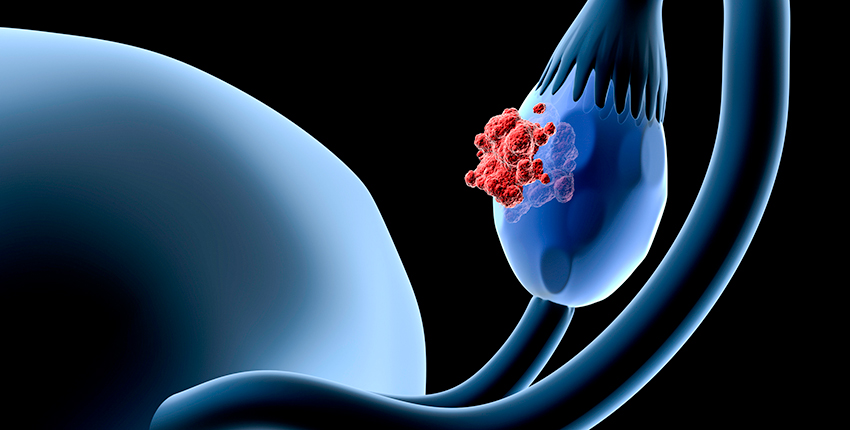 More than two-thirds of women with ovarian cancer have high-grade serous carcinoma (HGSC).

Up to 90 percent of HGSCs are not detected until they are beyond the ovaries or fallopian tubes, at which point it may not be possible to fully remove the tumor.

Many of these cancers are now known to originate in the fallopian tube, which is the site where almost all early HGSCs are discovered in healthy women undergoing resection of fallopian tubes.

In contrast, among women who first come into the clinic with symptoms of advanced HGSC that has already spread beyond the gynecological region, clinicians can often find little or no evidence of malignancy in the fallopian tubes.

Christopher Crum, HMS professor of pathology in the Brigham and Women’s Hospital Division of Women’s and Perinatal Pathology, describes this as the great mystery of HGSC.

“I’ve always been perplexed by the cases where women present with advanced HGSC out of the blue, and we don’t detect anything in the fallopian tube,” said Crum. “This is a fundamental mystery: Why do we catch the cancer so late even when we thought we were catching it early?”

In a new study published online July 25 in The Journal of Pathology, Crum and colleagues conducted an exhaustive analysis of "normal" fallopian tubes from patients with HGSC.

Their analysis indicates that normal-appearing tubes can contain precancerous cells that may escape the tubes, later progressing to cancer in the pelvic or abdominal cavity.

This concept—novel in HGSC—may help explain the origins of the disease, and it supports a potentially important ovarian cancer prevention surgery known as opportunistic salpingectomy (removal of the fallopian tubes).

Fifteen years ago, when clinicians began screening women who were at high-risk for ovarian cancer, such as those with BRCA1 or BRCA2 mutations, Crum and others began seeing evidence of early tubal cancers in addition to cancer in the ovaries.

In 2005, Crum began the Sectioning and Extensively Examining the Fimbriated End Protocol (SEE-FIM) at Brigham and Women’s in which pathologists thoroughly sectioned the distal fallopian tubes of patients looking for microscopic lesions.

They discovered that a very high percentage of early cancers could be found in the fallopian tubes, changing the thinking around HGSC’s origins. SEE-FIM is now used in clinical laboratories at hospitals across the U.S.

“There was a sudden paradigm shift in the field,” said Crum. “There’s now a push in the field to do prophylactic salpingectomy—removal of the fallopian tubes—for women who are coming in for routine surgery. The hope is that this will reduce risk of HGSC.”

Salpingectomy removes the fallopian tubes while allowing women to keep the ovaries and, therefore, maintain estrogen production and not enter early menopause. Data on the protective effects of the surgery are forthcoming.

But there is a paradox: Among women who enter the clinic with symptomatic cancer, only about 30 to 40 percent show evidence of early cancer in the fallopian tubes. This inconsistency troubled Crum, who was concerned that he could not rule out that the cancer might be beginning somewhere else.

To investigate, Crum and colleagues analyzed the fallopian tubes of women with widespread cancer but without obvious abnormalities in the tubes. This analysis, led by first author Thing Rinda Soong, formerly HMS clinical fellow in pathology at Brigham and Women’s, revealed that 13 of the 32 women who had at first appeared to have normal tubes had very early signs of precancerous cells, which the researchers termed early serous proliferations (ESPs).

ESPs are relatively common in the general population, but most women with these proliferations never develop ovarian cancer. On a hunch that some of these proliferations could still be important contributors to the development of HGSC, the investigators sequenced TP53, a gene that is mutated in all HGSCs.

In 12 of the 13 women with ESPs, the team detected a mutation in these precancerous cells that matched the mutation in the cancer found in the pelvis.

“This opens up the prospect that these little cells can escape off the fallopian tube, into the pelvis and, at some point in time, become malignant,” said Crum.

“This could tie a very high percentage of HGSCs to the fallopian tube—the tumor could begin either as a malignancy in the tube or in the peritoneal cavity from precursor cells that had previously escaped from the tube. If validated, this will be an important advance in our understanding of the pathogenesis of HGSC, with obvious implications for prevention of this disease,” he said.